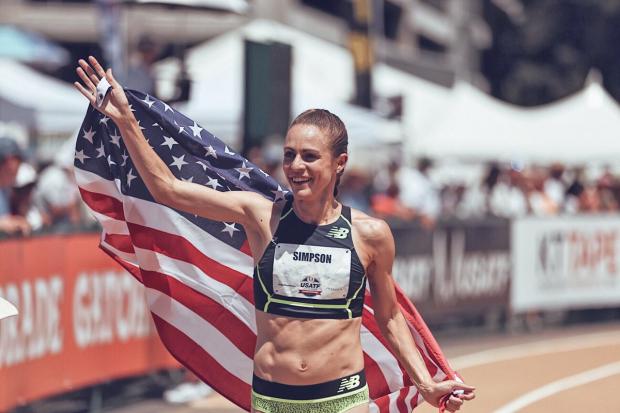 An autographed poster of Jenny Simpson's 2011 gold medal winning performance at the World Championships proudly adorns a wall in my house along side other track memorabilia. Simpson is Central Florida's golden girl and this weekend she tallied her fourth consecutive USA Championship in the 1,500m.

Simpson worked her way to the front with 500m to go and ran the last lap in 1:00.61 to win in 4:06.33 over Rio Olympian Kate Grace. The former Oviedo High School standout said she went into the race thinking about the heat and saving energy so she didn't burn out.

"During the race I felt it get a little windy and thought 'why didn't anyone warn me about the wind', she explained."Even though I was leading, I have to balance it. Today I had to slowly ramp it up to keep the lead and make sure I finish top-3 and make the team."

Quanera Hayes, who used to train in Florida, dropped a world leading time of 49.72s to win the women's 400m dash. St. Thomas Aquinas graduate and current Southern Cal star Kendall Ellis ran the world's fourth fastest time to finish third in 50.00s. She said afterwards it felt good and that she is honored and excited to get the opportunity to represent the USA on the world stage.

"I knew I was in the field with extremely talented women," she explained. "I knew it was going to be a competitive race from start to finish. I just wanted to be able to maintain contact and didn't get caught. I knew if I can keep up with Quanera (Hayes) in Lane 7 that I would be able to finish strong."

Right behind Ellis was Dillard alumni and Miami Hurricane Shakima Wimbley who was 5th in 50.36. See what she had to say after the race.

Like Wimbley, Tony McQuay just missed out on an individual spot at the World Championships in the 400m dash finishing 5th in 44.51s. They will most likely be a part of the 4x400m relay pool.

Florida high school alumni Dedric Dukes, Walter Dix, and Brandon Carnes all advanced to the semifinals. Dukes' time of 20.49 was the third fastest on the day. Isaiah Young who made the 100m finals and trains with the Star Athletics group and Dennis Mitchell is the top seed with his 20.29.

Noah Lyles (20.54) who trains at the National Training Center with Lance Brauman, and Tyson Gay (20.66) who works out with Gary Evans in Clermont also moved on. For Lyles, the race was nice and smooth as he was just trying to move onto the next round.

"We've got a couple rounds tomorrow so maybe it coulda been easier, but I've just gotta get out strong, get a good position around the turn and maintain that through the finish," he said. I'm out here living my dream, all I have to worry about is running."

For the older Gay who finished second in his heat, the race was more taxing.

"I'm tired, boss, Gay declared. "I'm trying to get in some good speed work. I hope I can make the team in the 200m, so I'm going to go out there give it my all and see what happens."

Much like the men's 200m dash, the women's features a mix of athletes who went to high school in Florida, college in Florida, and currently call the Sunshine State their training home. A day after winning the 100m crown, Tori Bowie who trains with the Pure Athletics group and Lance Brauman at the National Training Center clocked the third fastest time of the day. Her 22.69 won her heat and put her in a good position for the sprint double.

"I mean, coming in a little sluggish (and) sore today," she said. My coach said if you get through first round today we'll  feel much better tomorrow. So, I am just looking forward to tomorrow."

Kyra Jefferson, the 2017 NCAA 200m champion from the University of Florida won her heat in 22.85, the sixth fastest heading into the semifinals. Jefferson, who is riding a wave of momentum says moving on felt good.

"My coach coming in said that our goal was to be the first in my heat so I can have a good setup for tomorrow," she explained. "The head wind was crazy coming off the turn. Other than that, it felt good. I am going to go to the back and talk to Coach Holloway and get on the table and get ready for the next round."

Also qualifying was Lake Highland Prep class of 2014 graduate and current USC sprinter Deanna Hill with her time of 23.07. Former Florida standouts Diamond Spaulding and Kaylin Whitney failed to make it to the next round.

The Florida Gators continued to show why their athletes have loads of success in the hurdles. Kerron Clement ran the fastest overall time to win his heat with a 48.61. Eric Futch, the 2017 NCAA champion also was victorious in his heat with a time of 48.63. Clement said he was using the rounds as a workout because he has a bye for Worlds.

"I am just trying to see where I am and getting my steps down into the hurdles," he explained. "I feel really confident going into London, that's where it really matters to me, to get a Gold medal. I am feeling strong."

Fellow Florida Gator and Lakewood High School graduate T.J. Holmes also advanced with his time of 48.98. The last man in was Bershawn Jackson who ran 49.52 to continue his track and field career.

Former FSU steeplechaser Colleen Quigley was third to round out the night in 9:25.40.