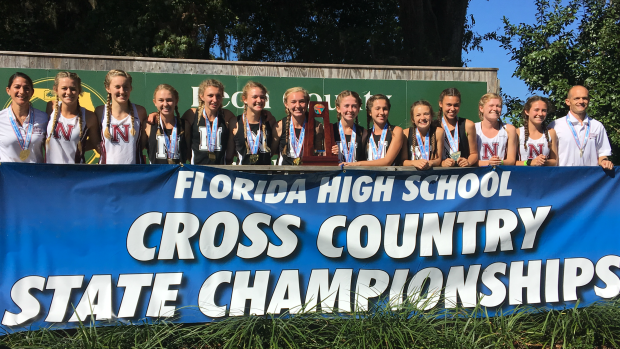 The Niceville girls ended the year as the 2016 state champions in 3A, while the boys were district champions and qualified for state after losing a majority of their 2015 squad. Coach Jamie LaFollette gives us the Scouting Report on both the girls and boys squads.

For our girls, last year was a season to remember!  Winning our first state championship in 21 years, going undefeated throughout the season, and capping off the season with a 4th place finish at NXN Southeast was amazing.

The boys team, despite graduating 6 of the top 7 from the 2015 team we were able to defend our District title and return to the State meet.  What the boys gained from last season was confidence, which was evident during track season as we continued to improve.

How is the team looking this year?  What are your tentative top five and top seven?

The girls' team is looking great again this year despite graduating two amazing athletes in Abbie Harrelson and Alexis Sherwin, plus three other four year seniors.  That being said, I think that we will likely be even better than last season.  We return three seniors who have all gone sub 19:00: Ciara Coger, Hannah Schneidewind, and Ally Woodard.  We also return juniors Erin Eubanks, Hannah Farley, and Jayda Brooks and sophomores Erin Converse, Jayden Horne, and Clara Beth LaFollette.

The boys' team is also looking very strong after a summer of training.  We only graduated two from our top 12 and are loaded with experience.

Just as last year boys teams' strengths will be the tightness of our pack and our depth.

Summer training has been awesome.  We've run a lot of miles, spent time in the weight room, done some tempo workouts, and worked out every Friday at the beach in Destin. We sent 6 boys to Nike Camp in Asheville and a smaller group of girls to FSU camp.

Any new additions who may contribute?   Any surprise non-returners?

For the girls we have two newcomers who will be right in the mix for the top 7:  9th grader Lillian Holtery who placed 2nd at the FLYRA state meet and junior Nichole Blake who moved to Niceville from the frozen tundra of Alaska.

For the boys we have a great group of 9th graders, but it will be hard for them to crack the top 10, but you never know.  We also have a 300m hurdler and 400m runner who have joined the team and they may be able to contribute as well.

For the girls' team we have two goals:

Goal #1 - Repeat as State Champions.  That's going to be tough having to face Chiles, Ft. Myers, Ponte Vedra and Creekside and who knows who else in 3A will have improved.

Goal #2 -  If we stay healthy and run like we are capable of, we will consider returning to NXN SE and take another shot at qualifying for Nationals.

The boys have big goals as well.  We are shooting to place in the top 2 at the State meet.  We will need someone to step up to be a strong number 1 but I think we have a couple of boys who could surprise some people this fall.  As a whole, the team is hungry, but 3A, again, is loaded with talent and it will take us running our best when it counts.

Key meets: The Benson Double Dip at Marist School in Atlanta will give us a good picture of where we are early on then we will go to Alligator Lake to review the Region course and finally Pre-State.

My priority for the season is that I want everyone to stay healthy, improve, and enjoy the cross country season.  While we can't control how good other teams are, if we are able to do those three things, it's going to be an amazing season.  This year's seniors are the first class that I have coached for four years and I am really proud at how they have grown.  Finally, thanks FLrunners for all that you do for our sport!