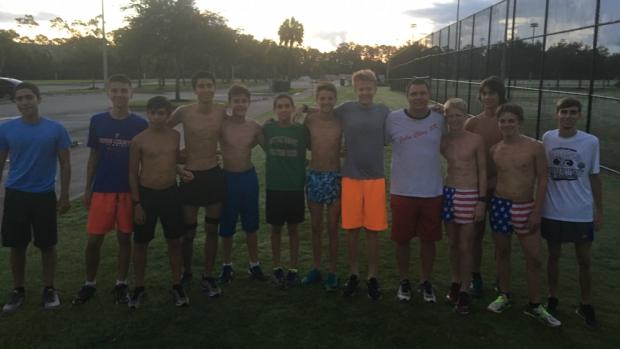 The Gulf Coast High School boys cross country program returns one of the top teams in a loaded class 3A. Coach Adam English gives us the scouting report on this year's squad, one he says is coming off of their best summer training sessions in recent years.

Wow, that is a loaded question that I have thought about a lot. I could write a book about last season.  The Cliff Notes version is that we finished the season where we ranked during the Preseason, 14th. Our team goals and expectations were higher and we did not accomplish those goals as a team. Our team takes great pride in the hard work and dedication that it takes to be successful. Last summer and in the early fall, a few of the athletes lost that focus. The buck stops with me as the coach and I would have done a lot of things differently. As coaches, we spend a lot of time with our athletes and we become very close.

You want the athletes to succeed individually and for the team to succeed as well. To be successful, we can't want to succeed more than the athletes. One of the biggest lessons that I learned last year is that if an athlete is no longer passionate about the sport or is not on board with the team goals,  it is better for both the team and the individual for the athlete to find something that he is passionate about and enjoys,  even if he is a top runner on the team. One measurement of success I use as a coach is improvement from one season to the next. The team had a lot of success in that area, every athlete on the team earned a new PR during the season. That is one of the things that is beautiful about our sport.  Although it is a team sport, each athlete can work hard and improve as an individual.

How is the team looking this year?  What are your tentative top five and top seven?

The team is looking great this season. We just finished the best season of summer training since I have been coaching at Gulf Coast. Every single runner on the team was 100% all in and dedicated to do the work necessary to have a successful season. We have a great group of incoming freshman who ran all summer and who have committed to the team. I have to give credit to the upperclassmen and the leaders on the team who have set a great example to the younger athletes. It has been a fun and productive summer.  They are ready to race.

Nick Kamen and Cooper Back have established themselves as a solid one-two combination. Chris Reynolds is not far behind in the number three spot.  After that it is wide open for the rest of the top 7. Josh McHarris has come a long way and greatly improved  since last season. Cale Schad and Michael Higgins are returning varsity runners whom we expect to make a bigger impact this year. The wildcard is the freshman, who are nipping at the heels of the upperclassmen. They have created a healthy competitive environment and are not letting the upperclassman take a day off.

Work Ethic, positive attitudes, dedication and drive. This has been such a fun team to coach.  Each day they come prepared to practice and have such great attitudes. After that, all of the rest is easy.

In addition to the best summer training results, we are coming off the most successful track season in school history. Again all athletes improved on their PR times in each event, and the 1600 and 3200 distance school records was broken by several athletes. During the summer, we continued to build on that success.  We lost only one Senior from that track team. The summer training programs are personally designed for each athlete. Some athletes are more injury prone then others, so they have different workouts.

The freshman are doing much less mileage with less intensity then the upperclassmen who can manage a more demanding work load. I am proud to say that each runner followed his individual plans and is prepared for the cross country season training. We went to the FSU cross country camp as a team. I have sent my teams to the FSU Camp in the past, but I have been unable to take the time off from my career to join them. This year ,I was fortunate to join them, and we were really able to bond even more as a team.  Plus we learned a lot from FSU Coach Bob Braman who is one of the premier coaches in the country.

Any new additions who may contribute?   Any surprise non-returners?

Although all of the freshman have worked very hard this summer,  the three who are challenging the upperclassmen, right now, are; Micah Evans, Jackson Pope, Evan Cardec.

What are the team goals and meets you are keying in on this year?

To keep improving each week and to stay positive and hungry. We train for one meet and that is the State meet, we train through most of the other meets. We always want to perform well at Pre-State and Flrunners. Those big meets really give us a sense of where we are compared to the other programs.  Conference, Districts and Regionals are of course also very important. We can't get to the State meet without taking care of business first.

We have specific team goals for the post season.  The other teams will have to wait to find out what they are.

I want to give a special thanks to Coach Leigh Williamson. Last season we were fortunate to steal her away from the DDD and Estero program. She would drive twice a day from Estero to Naples to help our athletes to be successful. She did all of that as a volunteer and never complained. I learned a lot from her as a coach, and the team was fortunate to have her last season.