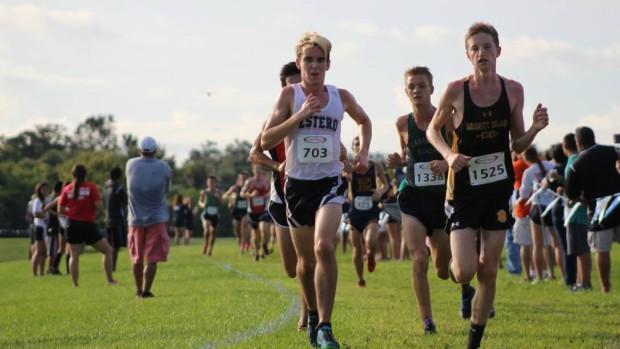 Estero junior Hugh Brittenham was second at the district championship and 4th at the 3A Region 3 Championship. Learn more about Brittenham in this Spotlight Athlete feature.

I ran my first 5k the summer prior to my freshman year and I started running cross country and track in 6th grade although there really wasn't training involved.

My first real race would have had to been the 3D Invite freshman year and I definitely just started out as the optimistic freshman who had little idea how hard the course was.

How is your summer training going?

Summer training has actually switched up from the previous years. Last year it was heavily focused on getting the miles in. This year we have our two hard speed workouts usually on Tuesday and Saturday, where one of them is all about pacing so often is a mile repeat workout, and the other is the short sprints. The other days are either progression distance and then recovery days.

I was disappointed with the 2016 season. I felt like I didn't progress as much as I wanted, but the team came out as district and regional champs so that was just amazing.

What's a typical training week like?  What is your favorite workout?
My favorite workout would have to be our "boot camp" workouts, which focus primarily on  footwork, core and upper body strength. It just changes up the monotony of the rest of the week.

We start this season with the Jim Ryun Invite, then we have the 3D Invite, Hoptar, Pre-State, FLRunners.com Invitational, Conference Districts, and hopefully the rest of the state series. I think there are some other races and maybe a few post season races.

Do you have a favorite course? What do you think is the toughest course in the state?

My favorite course would have to be the state course. The weather is almost always perfect, plus it combines aspects from other courses that make it a course that can favor a large number of runners which makes it a more interesting race. The hardest course is easily a flooded 3D course.

Out of all your running accomplishments so far, which stands out the most?

I think my performance at the FSU relays and my 1:52.84 800 stands out the most especially since it was my most strategic race, although the mile at states where I came in 2nd was definitly one that people couldn't take their eyes off

This cross country season the big goal is sub 16. I didn't really perform as well as I wanted last season so this year I definitely want to be viewed as a threat from the other top athletes. I'm also gunning for a state podium performance.

The thing I love most about running is simplified into two categories. The first being the energy and timeless feeling you get when you're running a great race. The second, being the thrill of finishing a race and knowing that if anyone was close to you prior to the .1 they wouldn't have been able to touch you.

Favorite running quote, I don't think I have just one. I do love the quote "throw me to the wolves and I will come back leading the pack". When your running against the likes of Joshua Collins and Micheal Phillips, it definitely feels like you've been thrown to the wolves.

Pre-race I always go through the same warmups I always do and I keep on thinking about what I've been training for. However, once the gun goes off I always remember that this is where the work has been into for, and that the plan is subject to change.

My favorite food definitely a McDonald's double quarter pounder, all greasy and great for the body.

Ironically enough the last movie I watched was Cars 3 and it was actually a pretty good movie, and felt rather appropriate given the current situation with Bolt and Sir Mo Farah.

I don't have a set shoe brand. On long distance days I run in Hoka's. For most training days I run in Brooks, my racing flats are Brooks. My previous flats were Saucony, but I have fallen in love with Saucony spikes, especially for track.

Every runner always wants to meet the great distance runners like Mo Farah, but personally I want to meet Sebastian Coe. He was just an amazing 800m runner and became so good that when he walked onto the track everyone else immediately knew that it was a fight for 2nd place.

Are there any interesting points people may not know about you?

I actually didn't start with running. When I was younger I lived with my grandparents and whenever I didn't want to do homework I was told to go run laps around the acre and a half property. But no, I actually started and fell in love with basketball but now I doubt I could even make a free throw.

Lastly, if you were stranded on an island with three things what would they be?

If I was stranded on an island with three things,  the first would be a how to book on basic survival on how to survive on an island, with pictures. The second would be a pair of Hoka shoes because I'd need something to keep me busy. Lastly, a box of Swiss cake rolls because you always need to enjoy the little things.