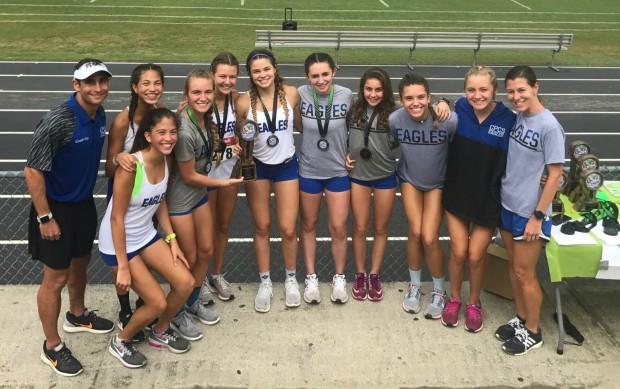 The cross country gods smiled on the 2017 Lecanto Invitational at Lecanto High School on Saturday. After cancelling the meet altogether in 2016, it was as near perfect a morning as any runner that lives in Florida during early September could ask for. A cloudy firmament kept temperatures down and the early morning fog evaporated just in time to let the varsity girls race begin.

The course laid out at Lecanto was not a spectator's dream. It's one, large loop wound around buildings and through wooded areas, allowing for only a couple of spots to watch the action before it emptied out into the football stadium and onto the asphalt track for about 300 meters. However, for a runner, it was a true cross country course. A steady rise coming out of the first turn, after the start, made for a decent climb. Runners reported other modest hills at other points in the course. The mix of grass, sand, concrete and asphalt provided an array of surfaces.

It was little surprise that Bailey Hertenstein shot out to an early lead and devoured the course. She hasn't even come in second in a cross country race since her freshman year. Now a senior, Hertenstein continues her rein over cross country in the state. Already with the course record at Apalachee Regional Park and a host of other meet records, Hertenstein now has the Lecanto meet record to her credit with an 18:24.47. It set down the meet record set last year by oh, almost 30 seconds. 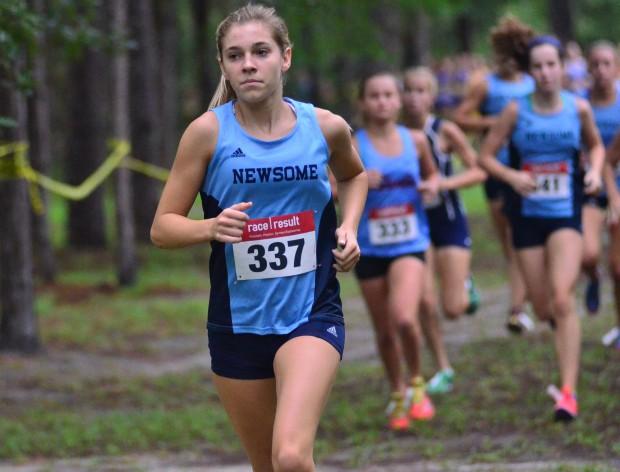 Equally dominant in the boys race, Trevor Foley captured the meet record as well with his 15:52.29. That only set down the boys meet record by just over 12 seconds but it was a meet record holding out from 2014 (Travis Nichols of Land O' Lakes). Foley has a new jersey for 2017, too. After starting at Nature Coast Tech, then transferring to Hernando, Foley has found a home to run his senior year at Citrus Park Christian School in Odessa. 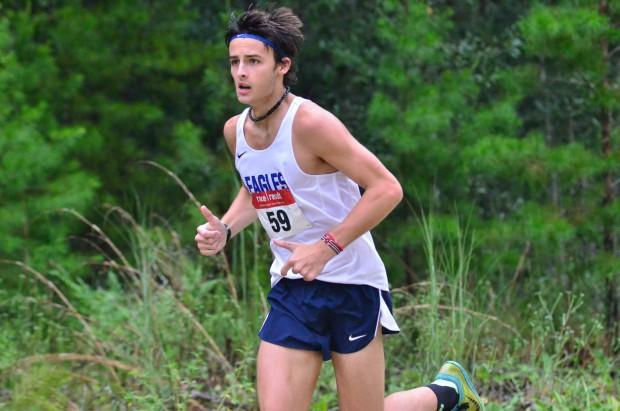 Both Foley and Hertenstein finished way in front of their respective fields but some great showdowns and solid individual performances happened further down the lists.

On the girls side, running mates and best friends Jacqueline Abanses and Lydia Friedman hung together through the first two miles of the course. With Friedman being a sophomore and Abanses being just a freshman, it would be an easy assumption that it was their first time on the Lecanto course. It would be an incorrect assumption as they both ran 3k races at Lecanto as middle schoolers. 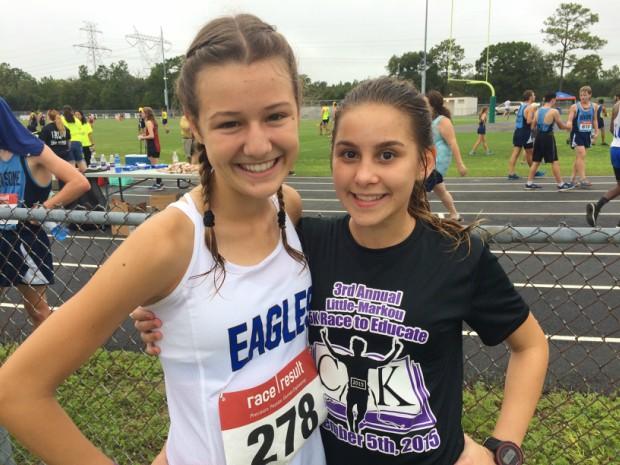 "The 5k is different, you don't do the hills as many times but I like it more," Abanses said. "I enjoy the distance."

Both athletes also run for the Hillsborough Harriers and both had to make some decsions as to what footwear they would go with for the mixed surface course.

"Originally, I thought I'd use my baby spikes because of the grass but I thought that would be too much with the cement," Friedman said. "I ended up going with track shoes and no spikes." 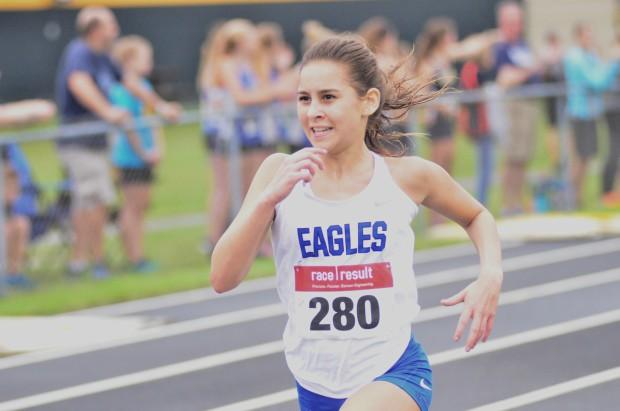 Not too far behind Friedman at 19:44.87 was Citrus senior Jillian Felton. It was Felton's third time on the course at Lecanto as Citrus is one of the relatively nearby schools. She would use that experience to take fourth place and demolish her previous times on the course, her best prior being a 21:04 from 2014. Berkeley Prep's Sydney Avery had to duke it out with Plant City's Cassie Highsmith for fifth. Both were the last two runners under 20 minutes with Avery holding on for fifth at 19:56.34. Highsmith took sixth at 19:56.80.

In the team standings, the Citrus Park Christian Eagles made a resounding statement on Saturday. A Class 1A team, the Eagles out-paced one of the top-ranked Class 4A teams in the state, Newsome 37 to 58. Behind Abanses and Friedman, Brooke Santiesteban took seventh in 20:11.26. Alexandra Perri and Grace D'Angelo took 12th and 13th to round out the top five scorers, all under 21 minutes. Newsome got an eighth-place finish from Emma Solis at 20:17.34 behind Hertenstein and freshman Keleigh Scallon took 10th at 20:34.38. Defending Class 4A state champs Steinbrenner took third as a team with junior Sarah Magee leading the way in ninth (20:29.75). The Warriors were a distant third with 113 but they were without possibly their top runner in Alexandra Straumann as Straumann was still recovering from an alergic reaction to fire ant bites, sustained earlier in the week.

"This was one of our hardest training weeks of the season so far," Eagles coach and Team USA triathlete Ray Friedman said. "Our middle school teams did really well, too, now it's all about Ocala (Horse Park) next weekend."

Citrus Park Christian won both the boys and girls middle school titles on Saturday, in 3k races prior to the high school races. 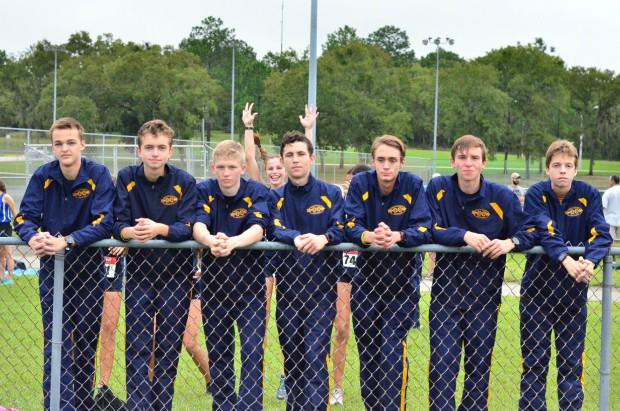 On the boys side, Steinbrenner prevailed with a great score of 36. Junior Davis Bly led the charge for the Warriors, taking third place in 16:46.11. Bly took a big step forward on Saturday. His only experience on the course was a freshman run on JV where he went 19 plus. Bly noted the decent hill at the beginning and some of the smaller ones throughout and that he'd underestimated them his first time on the course.

"First meet of the year and on a course like this to basically PR (2 seconds off), I'm definitely happy with that time," Bly said. "For right now, I'm really happy. The whole varsity team looked really good today." 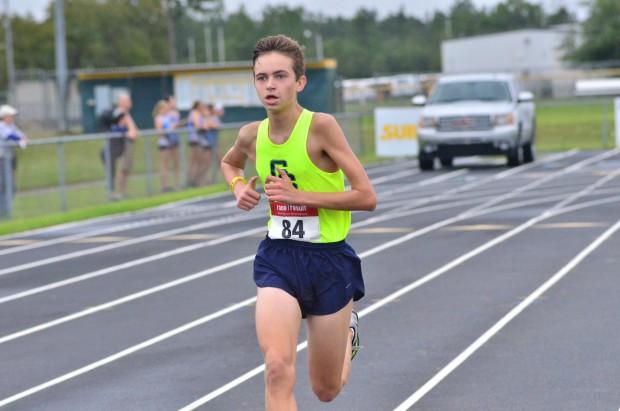 That sentiment was echoed by Steinbrenner boys coach Bobby McConnell.

The only person to hang with Foley, at least for a while was friend and training partner Jacob Hensley of Citrus. Hensley and Foley hung together through some of the wooded areas, trading words in between gasps of breath until Foley started to pull away. 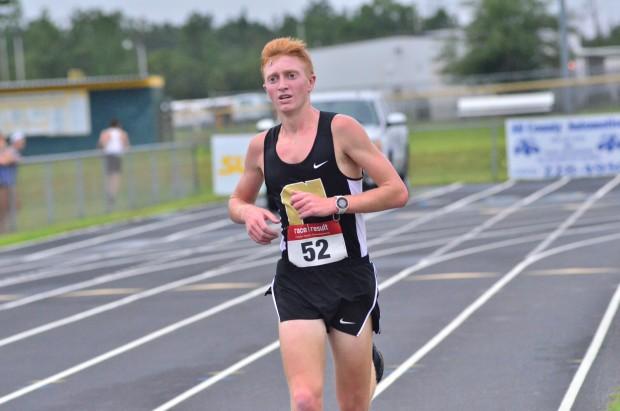 "I was not planning on going out that fast," Hensley said. "Trevor talked to me before the race about trying to go sub-16 but I knew I just wanted a good race after I'd kind of cruised last week at Whispering Pines."