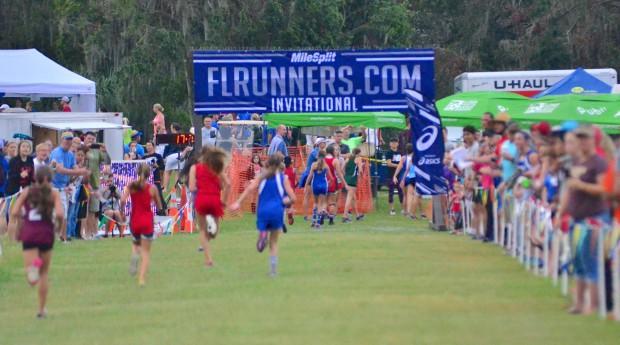 The planets had to align just right for the 18th installment of the Flrunners Invitational. After racing for years in Titusville, the venue was moved to Holloway Park in Lakeland. Mother Nature had other ideas. Hurricane Irma ripped through Florida on September 10 causing widespread damage throughout the state. Sporting events of every kind had to be rescheduled or canceled. It looked as if the course at Holloway Park would be too affected to host the weekend's events, but the area cross country community rallied in support.

"We reached out to the park after the storm and then came out to survey the damage and there was a lot," George Jenkins head coach Dale Meskimen said. "I thought there was no way we were going to run the meet here but Mr. Holloway and park staff brought out some heavy equipment to remove the downed trees." 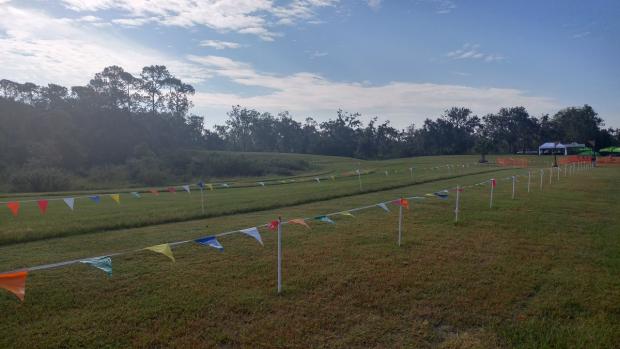 That Saturday the entire Jenkins cross country team as well as individuals from eight other nearby schools, 150 people total, descended on the park in a massive cleanup effort.

"There were even people from the Brandon area that came out to help clear the trails," Meskimen said. "More people than I ever imagined showed up and there were so many people that we were done in two hours. It was a true running community effort."

And so the races were on. A much improved awards stage, announcer and a DJ spinning tunes made for a fiesta-like atmosphere on a surprisingly cool September morning. The cloud cover and light rain that fell the night before primed the course for some fantastic times. 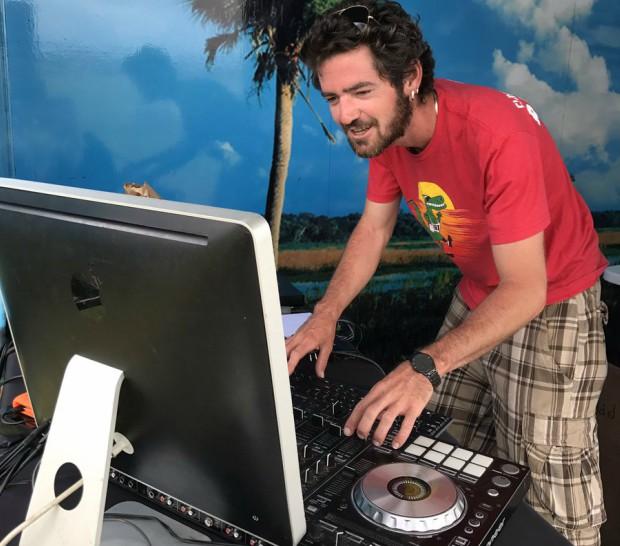 The course at Holloway is one of the tougher in the state. It mixes all natural surfaces, has hills and turns and sand. It's no wonder that only four female runners had ever broken 19 minutes there. On Saturday morning in the girls Race of Champions, the top 10 girls all broke 19 minutes.

"It's a testament to where high school running going," pro athlete Johnny Gregorek said. "Distance running is going in a great direction; that hard work was on display here today." 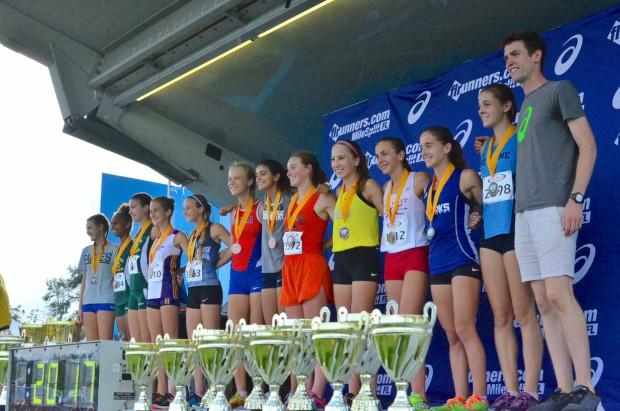 Gregorek was 10th at the World Championships in the 1500m and is sponsored by ASICS. ASICS was also a sponsor for the event. ASICS was giving away shoes and swag and Gregorek was on hand signing autographs and handing out hardware. 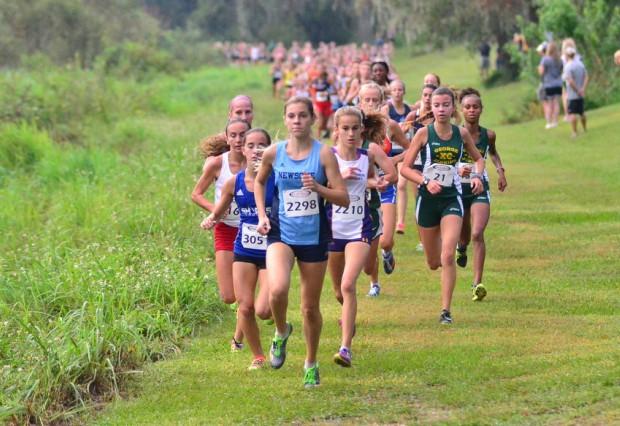 The girls Race of Champions lived up to the hype, even if it was not much of a surprise. Newsome's Bailey Hertenstein has emerged as a state-wide legend, but she was going to get a challenge from former teammate and upstart Riverview sophomore Alyssa Hendrix. The pair had the two best overall times in the state and the two best times at Holloway Park; Hertenstein held the course record of 18:13.83 from last season. 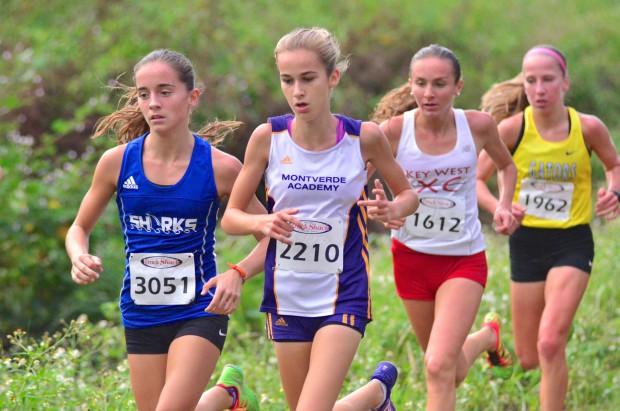 The group set off up a gentle, grass slope and circled back through the event area near the one-mile mark. The group held tight together with Hertenstein leading. Hendrix and Montverde Academy's Lily Henne were stride-for-stride in second. Key West's Nicole Matysik held third and Land O' Lakes' Natalie Abernathy was in fourth. The runners vanished for a battle on the back trails before emerging near the three-mile mark. By then, Hertenstein had put a six-second gap between her and her protege. 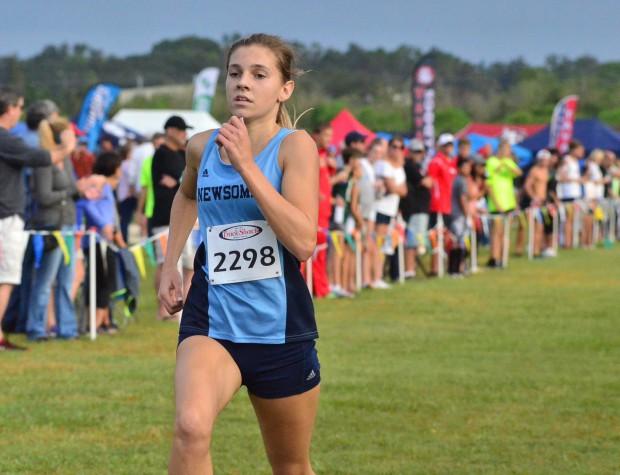 The fast field helped Hertenstein to a ferocious finish in 18:10.4. It set down her own previous meet record by more than three seconds. She won the Flrunners Invitational for her third straight year. With the Hertenstein rabbit to chase, the next nine runners all came in with scorching times. Hendrix took second in 18:14.1. That time smashed Hendrix's next best time at Holloway by 33 seconds.

"My ultimate goal was just to stay close to Bailey but then Nicole (Matysik) from Key West was doing awesome, she was right there with me the whole time," Hendrix said. "I came into this excited and scared. I was excited to see what my time would be but I was scared because I knew there were a lot of good girls here and I wanted to place good." 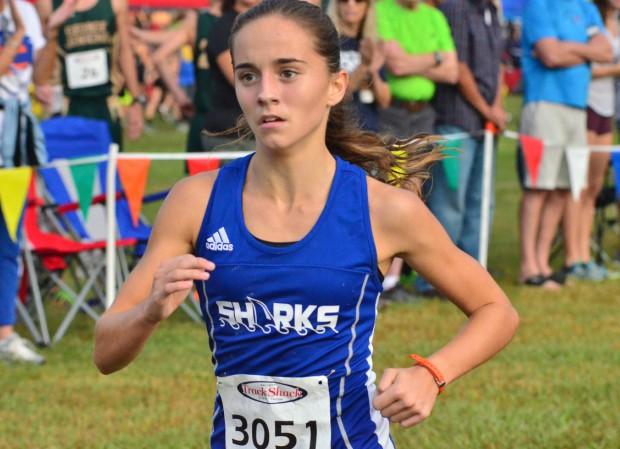 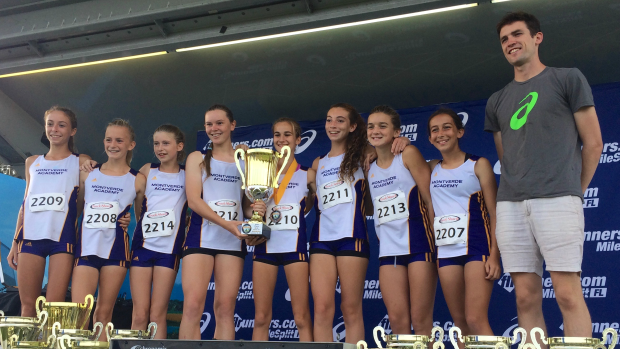 Team-wise, Henne's performance lifed Montverde Academy over upstart Citrus Park Christian. Freshman Kendyl Cardwell was the next runner in for Monteverde in 17th. 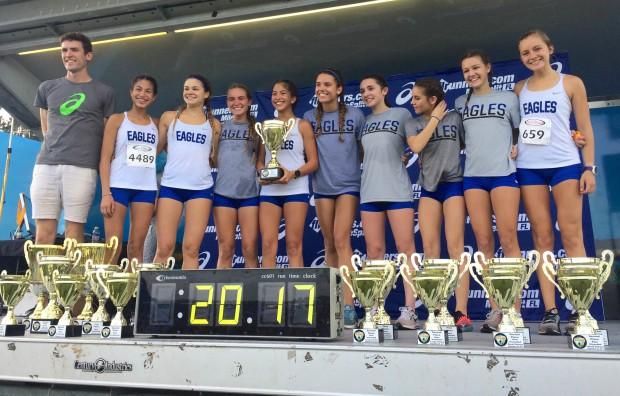 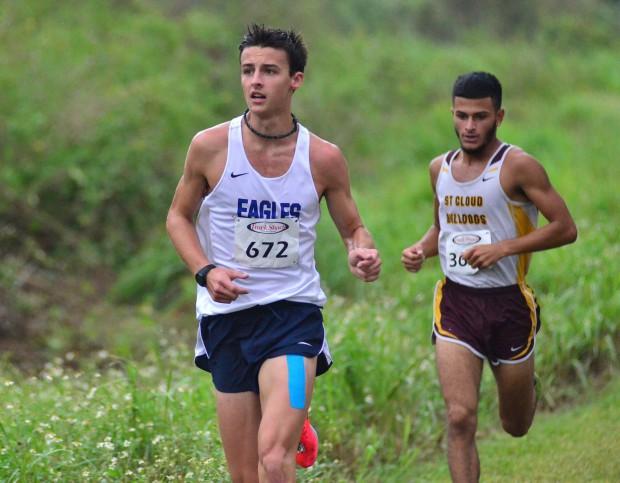 On the boys side, Citrus Park Christian's Trevor Foley was the early pace-setter and basically won the race by the two-mile mark, shutting it down a bit for the third mile but still winning comfortably in 15:54.7. Foley has the top time in the state this season, in fact two of them in the 15:20s. He didn't approach the course record for boys at Holloway of 15:46 but became just the fourth male, high school runner to crack 16 minutes. The other three to do it are now racing collegiately. Brandon Marquez, the course record holder now runs for Columbia University; Noah Perkins and Adam Bradtmueller now run for UNF and East Tennessee State, respectively.

Oddly enough, it was Foley that said it was actually St. Cloud's Tristen Montalvo pushing the early pace.

"I wasn't really pushing the pace the first mile but I kept the pace for the second mile and everyone else seemed to die," Foley said. "Then I kind of shut it down for the third mile because I'd been training hard all week and I have back-to-back big meets coming up the next two weeks." 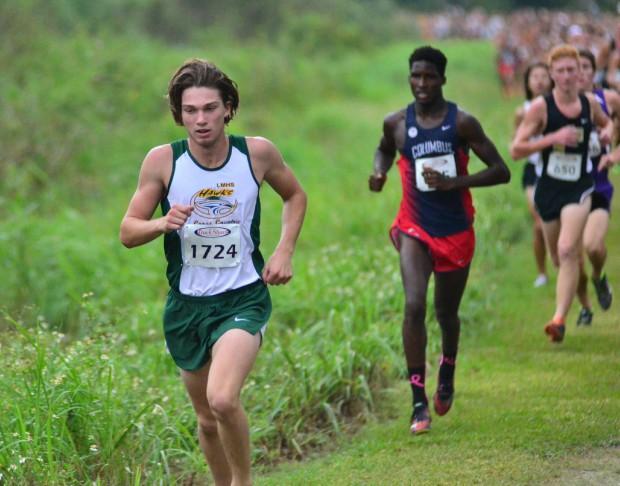 Foley had just a few strides on Montalvo through the first mile and the pair were several seconds ahead of a field led by Lake Minneola's Noah Quintana. 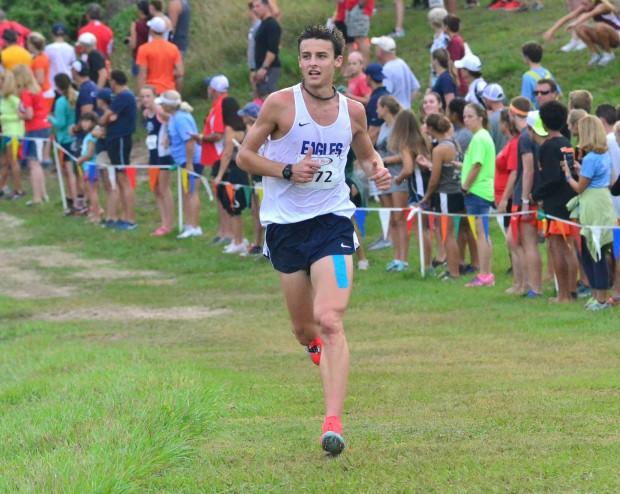 By the time Foley emerged near the three-mile mark, he was uncontested but a late charge from Sarasota's Benjamin Hartvigsen closed up some of the gap to take second in 16:03.2. It was a course PR for Hartvigsen.

"I was seeded sixth but I felt like I could do better than that," Hartvigsen said. "Montalvo is the top seed in my region so I really wanted to see how I could do against him. I'm very happy with my time; it's like 50 seconds faster than the last time I ran on this course." 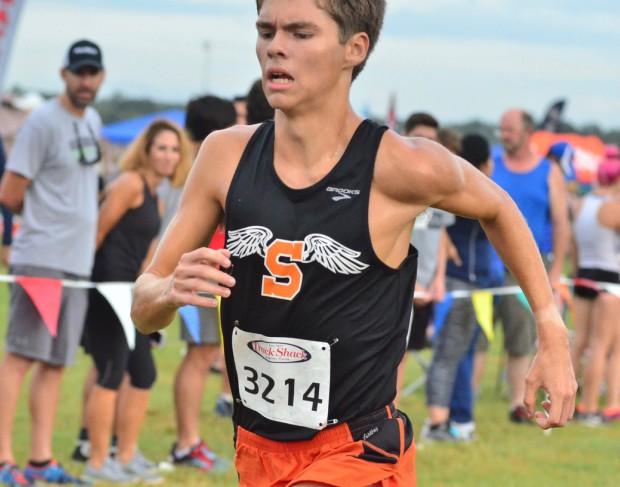 It was also seven seconds faster than Montavlo, who took third in 16:10.4. The Harvigsen/Montalvo rivalry will be one to watch throughout the year, especially for the state series. Montalvo just barely took third, having to battle Columbus' Deshay Fernandes, who ran a 16:10.5. Behind the top four, Estero's Hugh Brittenham was fifth in 16:13.5, setting a two-second PR. New Smyrna Beach's Aidan O'Gorman took sixth in 16:16.2, off his PR but way better than the 16:40 he ran at Holloway during 2016 regionals. Hartvigsen led the Sailors to a team runner up finish with 134 and Fernandes led the Explorers to a third-place finish with 158 points. 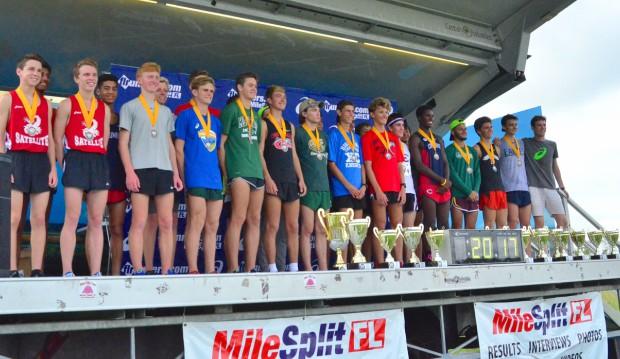 To spot the team champions on the score sheet, one would have to scroll way down to 14th place where senior Charlie Dickinson finished for Satellite in 16:41.0. But then a horde of Scorpions began crossing the finish line. 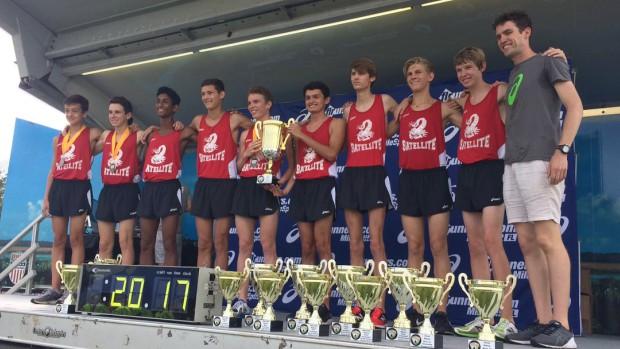 Teammate Nathaniel Basford took 15th in 16:42.0, and freshman Gabe Montague took 17th in 16:43.5. The top four Scorpions were all in the top 25. and their score of 99 comfortably out-paced Sarasota.

"It was a really competitive race here today," Dickinson said. "It feels really good to come out of here with a win."