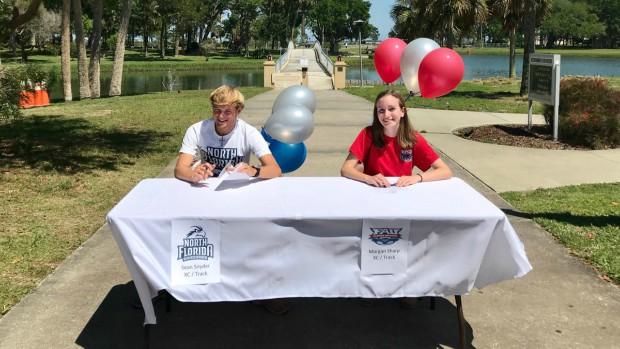 The final signing period for high school athletes is this week. Track and field and cross country standouts from across the state are finalizing their decisions on where they will spend the next four years. So where is everyone headed? Check out our list! Don't see your name? Send an email to Todd.Grasley@flosports.tv and we'll get you on there.

On the women's side:

Asia McMillon- The American Plantation HS hurdler is moving to North Florida to reside in Tallahassee as she has signed to be a Seminole. McMillon is a dangerous hurdler who holds a PB of 14.55 in the 100 hurdles and a PB of 43.29 in the 300 hurdles.

On the men's side:

Milton Ingraham- The Hallandale thrower will join Coach Dorian Scott's squad that consistently produces national qualifiers and All-Americans. Ingraham, who ranks in the top ten in the US in shot put and discus, will be coming in just in time as former Gulf Breeze thrower, Austin Droogsma finishes off his career as a Seminole.

Clayton Carlson- One of the best middle distance athletes to ever run for Lincoln HS, Carlson will be staying in his own backyard to run for Coach Braman and the Seminoles. Clayton has led his Trojans to a nation best in the 4x800 and has personal bests of 4:17.88 and 1:54.01.

Lake Wales senior Paul Stafford makes it official and signs with the Noles.

Deshay Fernandes- The distance star from Christopher Columbus HS is taking his talents to Gainesville to join the Gators and run under Chris Solinsky. Fernandez has a wide range of distance as he is a 1:53.94 half-miler and holds a personal best 5K time with a 15:43.99.

Trevor Foley- The junior Team USA distance runner is staying in state, where he will continue his running career. Foley is the reigning 2017 1A XC State Champion and holds a personal best of 9:12.66 in the 3200 and 15:20.00 for the 5K. Foley will join a team of successful FL high school stars.

Grace Blair- Not many athletes leave high school with six individual state titles, but Grace Blair is one of the few. The dynamic distance star will be staying in the same city where she has been mighty successful, but she will be trading the maroon and white out for some orange and blue.