The other distance guy at Nease High School not named Rheinhardt Harrison is pretty good if you did not realize. Runner #2 would be a star in his own right if not overshadowed by his junior superstar and likely America's next sub-4-minute prep miler.

His name is Bradley Anderson Ball and he just won over a loaded field against some of Florida's very best distance runners in the 3200-meter run at the Set Goals No Distance Showcase. The senior headed to Florida State University controlled the race from the gun and then pulled away from the rest of the field literally when he decided it was time to. 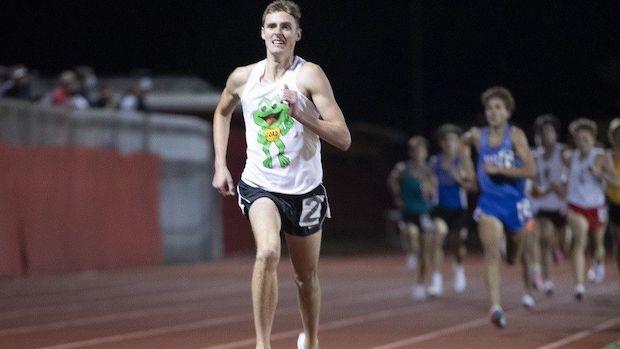 His final time on a windy night that affected the times for some (including Rheinhardt Harrison in the mile with a 4:06 victory) was a new personal best time of 9:08, which chopped 3 seconds off his 9:11 victory at the Bolles Bulldog Classic earlier in the month.

Ball's unintentional pace work paid off for the rest of the field as a total of 10 runners in the fast section broke 9:20 making up 10 of the top 14 ranked times in the state of Florida currently for 3200 meters. The final runner under 9:20 in the race was Leon freshmen Patrick Koon, who dropped a 17 second PR and was less than two seconds off the freshmen state record in the event by Charles Hicks of Bolles at 9:17.96 from the 2016 FSU Relays.

No question after watching Ball compete on Friday night at Satellite High School that he is strong enough and in shape to go sub 9 minutes for 3200 meters later this season in the right race. We might see him in the right race for the mile on Saturday at the Dunbar Tigers Classic, which is expected to have virtually all of the state's top 20 ranked milers sans teammate Harrison.

A win in Saturday's mile race and sub 4:10 performance would certainly continue to shed the title as Nease's second-best runner and simply stand alone as Florida's best.