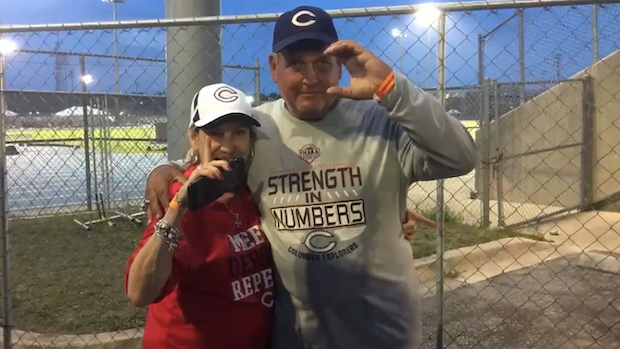 Fred Foyo, legendary and long-time boys track coach at Christopher Columbus High School in Miami, passed away over the weekend. He actually passed out and needed EMT assistance to take him away during the team's district track meet last Thursday at Tropical Park.

The squad fought on with concern of their beloved coach on their hearts and minds to still win the district team title on his behalf. Coach Foyo, unfortunately, succumbed to his deteriorating health over the weekend.

We are deeply saddened to announce that beloved Marist educator, coach, and Explorer, Fred Foyo '75 has passed away. He was a force in Columbus Athletics and in the legacy of our football and track programs. We remember contributions to the generations of Explorers he mentored. pic.twitter.com/EsGG4AKq0p

Our thoughts and prayers are with Coach Foyo's family, friends, athletes current and past dealing with his sudden loss at this time.

More on his passing by another past coach on the Columbus staff in Eric Pino below. It's with great sadness that I inform the Track & Field community that long-time Christopher Columbus Track Coach, Fred Foyo, passed away on Saturday.  Fred has been a part of the program since at least 1984 and took over as head coach in around 1988.  He is a foundational figure of the program.

The CCHS family is struggling with his sudden passing.  Yesterday morning the team gathered to comfort each other and celebrate Coach Foyo's lasting impact.  Foyo was a legend in Columbus' hallways.  His passion for the sport, love for his athletes, and generosity for those in need was a common theme of the stories shared by the students and faculty on campus yesterday.  These attributes that defined Coach Foyo can be read in the hundreds of social media posts by his former athletes, students, and colleagues.

Fred was very proud of the team's back-to-back State Championships in '18 & '19(and the team's 3 Runner-Up finishes '09, 10, '17) as well as the 15+ individual state champions he coached but he was truly proudest of the individual success his boys earned.  He loved when any kid on the program grinded out a PB (regardless of where you placed).  Receiving a big Foyo hug after a performance was the greatest feeling.  You felt his pride in his big ole embrace.

Even though he focused on sprints, jumps, and throws, Foyo always had a love for the crazy distance guys.  He busted our chops, celebrated our victories, and was awed at our dedication.  Again, he loved seeing his boys compete, regardless of the event.  He appreciated all facets of the sport. Coach Areces, Coach Hardwick, & Coach Diaz will lead the team for the remainder of the season with a giant gap in the center of the program.  If you see the athletes or coaches out at Region or State, show them some love--the pain is deep.