7th grader Eliana Black of Cambridge Christian set the FLYRA State Championships meet record in the middle school 3K at 9:57 and was only two seconds off the 1500 meet record set by Daesha Rogers 10 years ago in a 4:45 run on Saturday at IMG Academy in Bradenton, Florida. 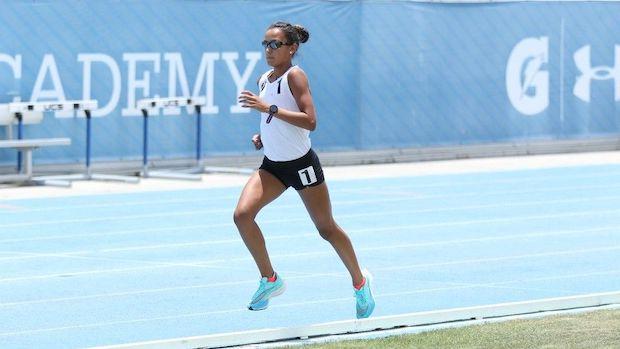 In our interview with the middle school distance star, who we sometimes forget that she is one while regularly competing and beating most of her high school competition during the FHSAA regular season with her Cambridge Christian squad, we discuss her two victories and her season overall while training with the likes of sub 4:50 milers Mary Ellen Eudaly and Caroline Lehman. She was the 1A state runner-up in the 1600 meter run behind teammate Eudaly, who helped pace her to her first sub 5-minute performance at the regional meet in 4:58.

In the 3000 meter run, which was run in the early morning hours on Saturday, Black had two quality challengers early on between Lucrezia Gowdy (2nd, 10:36) and Elizabeth Williamson (3rd, 10:57). But Black had shaken them both off before the 1600 meter mark, which she set a torrid pace with a 5:10 split that she actually felt comfortable with.

Coming back about 4 hours in the heat of the day after noon time in the 1500 meter run, Black once again ran away from and dominated the field. She finished nine seconds ahead of her nearest competitor with a 4:45.86 victory to add a pair of FLRYA track state titles to go with her pair of FLYRA cross country state titles from the last two falls in 2019 and 2020.

This weekend was the last race of the 2021 track season as she looks to shut down and them build back up her training for the 2021 cross country season, which could be a special one for the Cambridge Christian program with arguably one of the top distance running trios in the entire country including herself, Eudaly and Lehman.