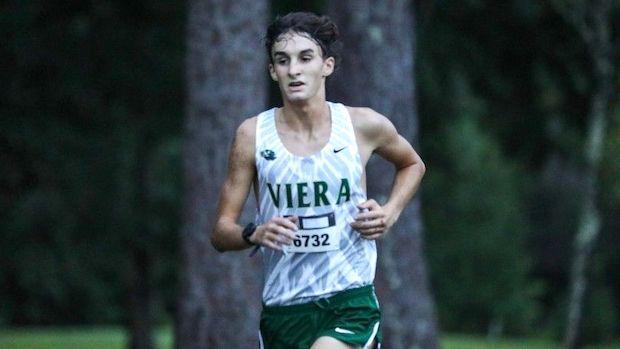 flrunners.com will be on-site with race video and photo coverage from the Vero Beach Invitational at the Indian River Fairgrounds on Saturday, September 4th.

The state's top-ranked boys team in Viera will be featured led by Michael Toppi as the individual race favorite. A potential 1-2-3 finish with teammates Cameron Raney and Robbie Naberhaus could be in the cards. All three nearly went under 16 minutes together last week leading their team to victory at Cecil Field including Toppi grabbing fourth place despite falling and being trampled early in the race.

Potential individuals who could break up that 1-2-3 sweep upfront from Viera include Anthony Matthew of Martin County, Jared Falchook of Celebration, Colton Lawson of King's Academy, and Collin Brooks of Boca Raton all proven runners.

Martin County's Matthew ran very well in the preseason against and ahead of Viera's top 3 runners in Raney at the Wickham Park Jamboree in mid-August.

It will be the opening season race for Celebration's Jared Falchook, who ran 9:34 for 3200 meters in the spring and has a 5K PR of 16:08 from the last cross country season.

Boca Raton's Brooks was a close runner-up last weekend in his season opener at the Park Vista Cobra Country Invite with a time of 16:31 finishing just behind sub 4:20 miler Ryan Douihech.

The King's Academy, Boca Raton, and Celebration look to be the teams settling and battling for a race for second place in the team standings behind Viera. A handful of sub 20-minute girls are found entering the meet including the long-awaited return to cross country racing for Avery Fronrath of The King's Academy. Two years ago, Fronrath ran a 5K best of 18:33 as a seventh-place finisher as an 8th grader in the 2A state cross country race. She did not race once last cross country season but ran 5:22 for 1600 meters and 11:11 (just off her 11:09 PR)for 3200 meters during the most recent 2021 outdoor season. If she is anywhere close to top form, she will come in as the favorite.

Not under 20 minutes yet, but she could certainly do it at Vero Beach and win the whole race is Catalina Edwards of Celebration, who impressively finished runner-up at the Jim Ryun FCA Invite on a tough course at Holloway Park in the heat with a time of 20:21. Her race last week projects superior to all other runners in the field from their races last week.

Last year's Palm Beach County runner-up Emma O'Day of Boca Raton has the fastest returning time from last season at 19:24. However, South Fork's Addison Boyer finished well ahead of her in their season opener last week with a personal best time of 19:30 for third place as well as Mia Rodriguez of The King's Academy.

Another runner coming off a big race one week ago and racing at the Vero Beach Invite is Rockledge sophomore Malinda Underwood, who won the non-elite varsity girls race at Cecil Field with a personal best time of 20:19.

The Viera girls will be the team favorites coming off a strong showing with a 9th place overall finish in a deep field at Cecil Field led by individual race contenders Isabella Narvaez and Brooke Gerrits. Only two seconds separate their PR's at 19:37 for Narvaez and 19:39 for Gerrits respectively. Gerrits ran her best time ever last week as the team's top finisher at Cecil Field.

Teams that appear the best challenge the Viera girls at Vero Beach will be The King's Academy led by Fronrath, South Florida HEAT, Rockledge, South Fork, and Boca Raton. With the addition of Fronrath, if King's Academy could find someone to step in the fifth spot then they are positioned well with a lineup that already has other 3 girls hovering around PR's of 20 minutes. 8:30 am Girls and Boys JV Combined (unlimited) (scored by gender)