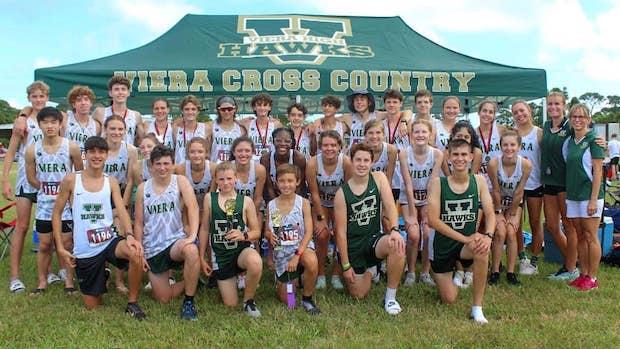 It was a big day for the Viera cross country program on Saturday at the Vero Beach Invitational hosted at the Indian River Fairgrounds with both their boys and girls squads walking away as team champions in the 36 school invitational meet.

Florida's top-ranked boys' team in the Viera dominated the competition as expected led by race champion Michael Toppi throwing down a stellar time of 15:33 for the victory. After taking a hard fall but being able to recover early on last week to finish fourth at Cecil Field, Toppi certainly showed what he is capable of this week to be considered as one of the state's very best cross country runners heading into this season as well as Rheinhardt Harrison's biggest individual threat in 4A. Toppi was never really seriously challenged in the race on the two-loop course at the Indian River Fairgrounds and took a commanding lead early on to win by nearly a full minute with the next finisher coming across the line being Anthony Matthew of Martin County in second place at 16:32. While Matthew has not popped a fast time this season, but now has put together two high finishes at Wickham Park and Vero Beach to elevate him among the top tier in the state certainly against those who have run on much faster courses.

Meanwhile, the Viera girls certainly were a team in the mix and consideration to win but not as a sure bet like their male counterparts. Led by Brooke Gerrits as the team's top finisher for the second meet in a row with a fifth-place individual effort of 20:25, the Viera girls (1st, 77 pts) ended up being 18 points better than the next squad in the meet in South Florida HEAT (2nd, 95 pts). Viera nearly had two more top 15 individual finishers in the girls' race with Isabella Narvaez (10th, 20:55) and Chelsea Paglia (16th, 22:16).

Winning the girls' race individually was South Fork sophomore Addison Boyer, who established herself early in the front and never looked back en route to a winning time of 19:57. Boyer is really improving greatly as a runner after coming into high school last year as a tennis player but ran 11:25 for 3200 meters this past spring to earn All-State honors in 3A. Expect Boyer to definitely be competing for All-State honors in cross country as well this fall in the 3A classification and go for sub 19 minutes in the 5K by season's end. Celebration junior Catalina Edwards grabbed another second-place finish at a major invitational for a second week in a row after last week finishing runner-up behind Haley Thornton at the Jim Ryun Invite. Edwards ran a 5K personal best of 20:09 at the Vero Beach Invitational and seems to be destined to run a time well into the 19-minute range soon with a consistently strong start to her season.

Viera heads next to the Astronaut Invitational in Titusville on Saturday.