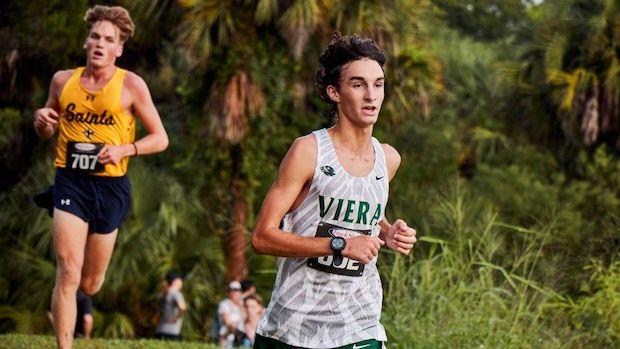 When Michael Toppi of Viera raced against another flrunners.com pre-season top 10 ranked runner in Nick Carpenter of Trinity Prep over two weeks ago at the Cecil Field Summer Classic, Carpenter finished 12 seconds ahead of Toppi.

However, Toppi took a major fall early in the race that did not allow him to have a fair shot in beating some of the best runners in the race playing catchup from the get-go. In the re-match between Toppi and Carpenter at the Astronaut Invitational on Saturday, the result was drastically different in the favor of Toppi.

Toppi won by a margin of 27 seconds throwing down a sensational time considering the muddy course conditions at Chain of Lakes Park with his winning time of 15:46. Carpenter came across the finish line in 16:13 for second place. The clash at Astronaut could produce potentially two state champions at the season's end with Toppi as Rheinhardt Harrison's toughest challenger in 4A and Carpenter one of the favorites in 2A. Another quality runner in Hagerty's Brayden Seymour rounded out the top 3 at the Astronaut Invite in 16:21 with his sophomore teammate Jonathan Leon trailing in 12 seconds behind him in fourth place at 16:33. Naberhaus took back the #2 spot on the squad from Raney, who had stepped up in that spot over Naberhaus in their last two meets. Their inter-squad competition is helping push Viera to have one of the best top 3's in the state, while the addition of the freshman Girard has been huge for securing the back end of their scoring five.

Viera's team score of 31 points put them well ahead of the next best squad in the 32 team field in Winter Springs grabbing runner-up honors with 101 points.

A 16:46 team average for Viera and a 17:57 team average for Winter Springs also showcased the clear disparity between Florida's #1 ranked team and the rest of the field.  Next weekend will not be such a gap as arguably the two teams who will be competing all fall to determine who is Florida's best will matchup at the Spanish River Invite in 4A state title favorite Viera and 4-time defending 3A state champions Belen Jesuit. The high team finish at the Astronaut Invite for the Winter Springs boys can be attributed to their pack running with Jalen Blake in 14th place at 17:42 and Johneleir Rodriguez in 15th place at 17:44 leading their squad, while only 38 seconds separated their entire top 5 scorers in the race.