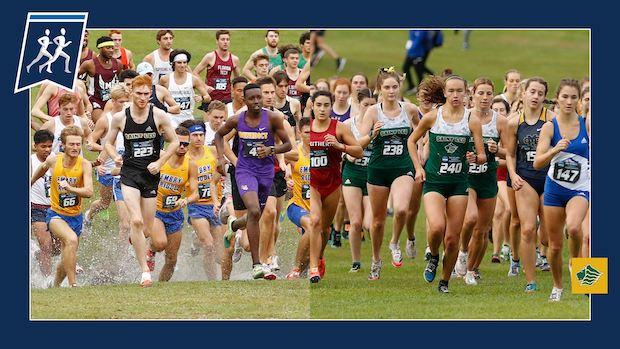 Meet Information | Live Results | Women's Video | Men's Video | Purchase Tickets
Saint Leo University, the Tampa Bay Sports Commission as well as the men's and women's cross country programs welcome in nearly 550 student-athletes to participate 2021 NCAA Division II Men's and Women's Cross Country National Championships hosted at the Abbey Golf Course, across SR 52 and university main campus.
After capturing second place at the NCAA South Regional on November 6, the Saint Leo women's team will represent the Green and Gold on Saturday as one of the 34 programs running for a chance at the national title. The women's 6K championship race is set for 8:30 a.m., which will be identical to the course ran for the DII National Preview on Oct. 2 and the South Regional on Nov. 6. At the South Region race, three of the seven Lions placed inside the top-10 paced with Faye Dervan in third place at 22:00.19. Paige Patterson placed fifth at 22:15.36 while Tania Jarreau took eighth at 22:33.17, all three running to All-South Region honors by the U.S. Track & Field and Cross Country Coaches Association (USTFCCCA).
Two Lions' men's runners also punched their ticket to the prestigious run, Shane Bracken, the South Region Champion and the South Region Athlete of the Year by the USTFCCCA, and Arthur Cosson. Bracken came from behind to claim medalist at the South Regional on Nov. 6 in a time of 31:21.89 on the 10K championship course. Cosson was close behind at 32:05.95, good enough for fifth place and an auto-qualification to the championship. Both Bracken and Cosson earned All-South Region honors by the USTFCCCA.
RACE TIMES: women's 6k race at 8:30 a.m. | men's 10k race 9:45 a.m.