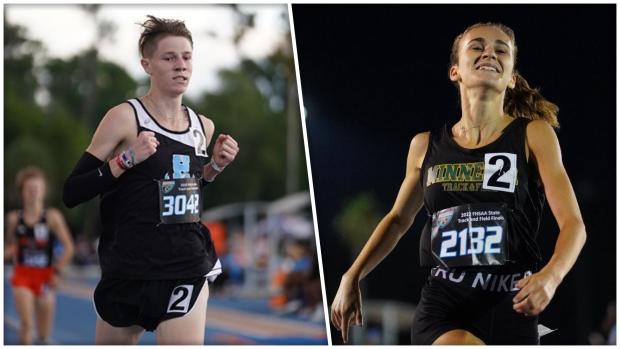 Seymour, last week's winner in the 4A boys 1600 meter race for his first state title in a state-leading time of 4:11.76, ran a nearly identical time this week but instead at the full mile distance at 4:11.90 to finish 9th field in the stout field.  The mile performance would convert to a 1600 meter best of 4:10. Seymour has spent quite a bit of time in New York City in 2022 including 3 trips to race indoors at the Armory which culminated in an invite to race in the Millrose Games high school mile this past February.

The University of Alabama commit Henne was coming off a sensational state meet and surprised many by the way that she challenged the often viewed as unbeatable Caroline Wells in both of her races in the 3A girls 1600 and 3200-meter run. Henne even took the lead and started to gap Wells later in the 3200-meter race before Wells rallied back to defend her state title. Henne still produced two lifetime best times of 4:52 in the 1600 and 10:35 in the 3200 as a result of her willingness to challenge and often dominantly intimidating Wells to her competition.

On Friday night at the Trial of Miles event in New York City, Henne held her own in the formidable field of top high school girls across the country to grab a seventh-place showing and clock a time of 4:53.91 at the full mile distance, which converts to a slightly faster 1600 meter time than her  4:52.74 state meet performance.

After being one of the fastest for her grade in the state thru middle school and freshmen year of high school, Henne persevered over tougher years midway through her sophomore and junior years to finish out her running career before college posting some of her fastest times yet and back on top.