Our subjective pre-season rankings list for the top 10 boys cross country teams in the FHSAA 1A classification for the 2022 season.

Preseason Pick: Who will win the FHSAA 1A boys cross country team title this fall? 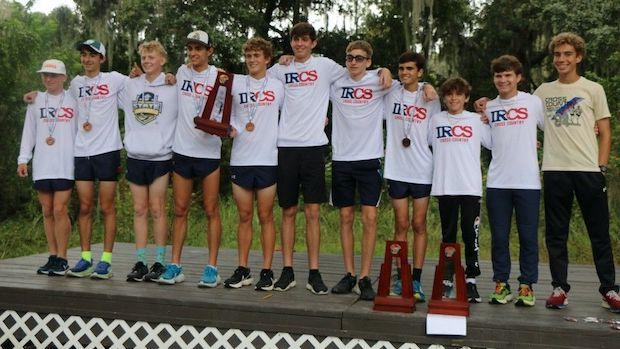 Griffin, Zamora, and Young were all top 25 finishers in last year's 1A state cross country race and should be able to move up into the top 15 together as a group potentially as well as Labrant.

Their team also will be bolstered by the addition of Jonah Berry, who transferred at the start of this past track season from the Florida Panhandle and Rocky Bayou Christian and was a state qualifier in cross country last year at his old school. He ran 4:46 for 1600 and 10:06 for 3200 on the track this spring for Indian Rocks Christian.

Honestly feel like their 2022 cross country will be better than their 2021 squad with the collective individual improvements. They had a lot of youth in their lineup with underclassmen in last year's state title run and leaves for plenty of upside as might be a group working together to take over the leadership hole left by Luna. Last year's state runners-up to Indian Rocks Christian by 12 points, Circle Christian certainly have the squad returning that can leap frog to win their first state team title in 2022. They only graduated their #3 runner from last year and are led by one of the individual state title contenders this fall in Jack Dejesus (2nd in 2021 FHSAA 1A State race) as well as another returning All-State finisher in Will Neeld (8th). Dejesus ran 15:51 for 5K last fall, while Neeld has a 16:27 best and their remaining varsity runners have 5K bests over 17 minutes flat.

Indian Rocks Christian could potentially pack it up on them between runner spots #2-3, so will the key to this team's success is not allowing that to happen with their remaining top 5 runners. Calvin Jagen broke 10 minutes for 3200 meters this past spring with Dejesus (9:44) and Neeld (9:49), so expect him to make them a stronger matchup thru 3 runners with Indian Rocks Christian and other top squads in 1A. Oak Hall loses 3 seniors and 3 of their top 4 runners from last year's 3rd place state meet squad which went into the race as one of 3 teams in legitimate contention for first place. While their graduation losses are greater compared to last year's podium squads in Indian Rocks Christian and Circle Christian, still potential for them to reload around their front runner and 2021 state champion at 3200 meters in Caden Montini with his 15:46 5K best. Montini rolled to fast times on the track this past spring including a 4:13 1600, 1:54 800, and 9:29 3200.

The biggest question for Oak Hall will be stepping up to fill or round out their top 5 as beyond the aforementioned 4, the rest of their returnees having 5K bests over 18 minutes.

Pensacola Christian graduated 3 from their top 7 of a year ago which finished 4th in the 1A state meet. Their returnees are from the front end of their 2021 squad with #2 Drew Birx (15:57 5K), #3 Micah Sleeth (17:09),  and #4 Micah Hodge (17:24) back while Andrew Sheppard and his 17:27 5K PR makes them solid thru 4 runners. Birx is a returning All-State individual finisher grabbing the 15th and final spot in Tallahassee on the podium last November. He will take over as the team's front runner after Jonathan Tutton graduated this past spring.

Certainly the best 1A squad out on the Florida Panhandle, Pensacola Christian will need someone to step up into the 17 minute range at least to try and keep up with the top 3 returning squads from last year who gapped them and the rest of the field as there was a nearly 60 point gap between third place Oak Hall and Pensacola Christian in the 2021 state meet.

Southwest Florida Christian had zero graduation losses from their 2021 state meet squad, who broke into the top 10 in ninth place with 315 points. Expect them to make a bigger leap inside the top 10 in 2022 led by Hayden Tank. Tank has a 5K best of 16:10 and finished just outside of the All-State top 15 at the state meet in 19th place.

Tank probably has two more teammates in the 17 minute range behind him in Blake Wolters (17:17) and AJ Duda (17:39), but their squad will need a pack of runners behind them in the 18 minute range to start making a push to join them as well to make them more competitive with the top tier teams in their classification.

St. Francis returns 5 of their top 7 from last year which placed 11th in 1A state cross country race and many of those same returnees had solid track seasons dropping their times including Sam Stone (10:24), Landon Turley (10:36), and Hayden Schoster (10:41) all running well into the 10 minute range for 3200 meters.

On a 5K cross country course, St. Francis nearly has 5 runners back who dipped under 18 minutes last fall with their #5 Jude Parker at 18:05.

Cambridge Christian has the potential to be a podium squad in 2022, but will all depend on who they can find to fortify their remaining top 5 spots after their strong top 3 which returns in All-State runner Braxton Legg, Christian Escribano, and Ryan Cano.

RIght now over a minute and a half gap exists between the 5K best of their #3 Cano at 17:14 and their #4 returnee which if remains will make it hard for them to keep their score low enough with the other top ranked teams in 1A. Legg certainly has the capabilities to win the 1A individual title if he can transfer over the success that he had on the track including posting times of 1:55 in the 800, 4:18 in the 1600, and 9:28 in the 3200. Escribano just missed All-State honors last fall in cross country with a 16th place run at Apalachee Regional Park.

Might be surprised to see Seffner Christian ranked so high considering that they lost really the two runners who kept them in every meet last fall with the low scorecards often produced by now graduated All-State runners Christian Giller and Andrew Stowe finishing 4th and 6th respectively in last year's 1A state race to help the team finish 6th overall.

Seffner's group of returnees for the 2022 season includes no runner with a 5K best under 18 minutes but it is a pack of them ready to bust through after making up serious ground during the track season led by Liam Perkins clocking a 10:09 3200 meter time on the track.

While Community School of Naples might lack a true front runner, they will certainly be one of the better packed squads with a tight spread that could possibly get under 60 seconds. Only one runner graduated from their 2021 varsity lineup, which placed 13th in the 1A state meet.

Holy Trinity is a team with a lot of upside as the only had one upperclassmen in a junior as part of the 2021 state meet squad which 17th in the field of 31 teams in the 1A race. Let's see if that group of rising sophomores and juniors can keep developing for them to be a team to finish amongst the top third of the field in 2022 led by Skyler Jensen and Augustine Stehley both running 17:10 for their season best 5K's last fall.