Workout Wednesday with the Bishop Kenny boys and girls cross country teams, who will be hosting one of the best invitational meets this upcoming weekend in the Katie Caples Invitational on their waterfront school campus in Jacksonville. The program has a rich history of excellence and past champions in cross country.

For the workout, the boys team ran 5x1200 meter repeats, while the girls team ran 6x800 meter repeats for their top runners on a good portion of the course which will be used on Saturday night. A super early morning practice with a 5:30 AM start time to get a practice in before the sunrise and allow athletes enough time to get ready on time for their school day. 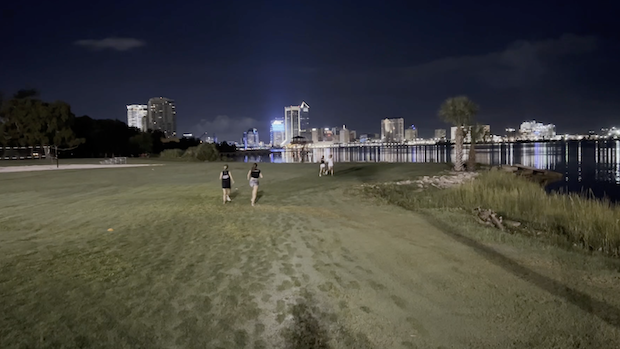 The Bishop Kenny girls are one of the top teams in the 2A classification right now with an impressive 36 second separating their top 5 runners ranging from 19:36 to 20:12 led by senior Mary Biagini (19:36) and junior Davis Johnson (19:42). There is a good chance at a 1-2 finish in the 2A state meet race at season's end for Jacksonville area private schools between the defending 2-time champion Bolles and the Bishop Kenny girls. The key for them will be keeping their pack intact against other 2A teams who might struggle in the fifth runner spot, while continuing to have that pack move up in the field led by Biagini and Johnson. Meanwhile, the Bishop Kenny boys did not have a head coach midway through the summer training months but Adriane Mendoza (formerly at Tampa Catholic) stepped into that role eventually and has a young boys squad coming on strong halfway thru this season including many running season best times this past weekend at the adidas Challenge in North Carolina. Coach Mendoza was a former Division 1 collegiate track athlete at Indiana State University.

Bishop Kenny junior Juan Pablo Castillo-Zima (16:11 5K best) is an emerging front runner for their squad with Alejandro Vinas (16:46) as a solid sub 17 minute #2 runner.  Currently ranked #9 in 2A, do not be surprised to see the Bishop Kenny push for a top 5 finish at the state meet. They might be just a year away from challenging for a state meet podium spot.

Bishop Kenny will be looking to be gracious hosts for all the teams coming to compete at the Katie Caples Invitational, but they will be not trying to be so cordial in trying to beat the majority of those same teams with hopefully high finishes by both squads. flrunners.com will be on-site with race video and photo coverage on Saturday night.