A virtual race projection using the season best projections for all 32 boys runners competing on Saturday at the FACA All-Star Senior Race at Holloway Park in Lakeland, Florida.

This race will definitely have some star power with 10 runners in the field who have broken 16 minutes for 5K including several who earned All-State honors just one week ago. 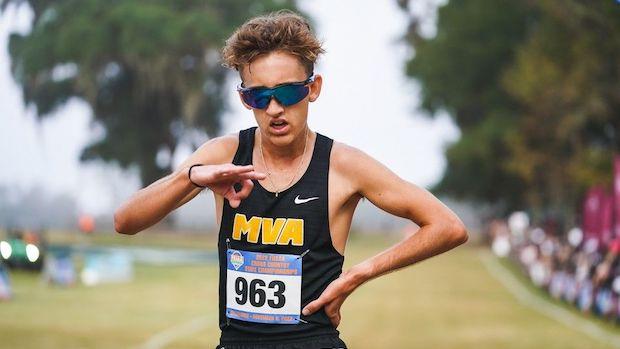 The top two individuals to watch and race to see who is rocking the coolest sunglasses should be two who were battling in the lead group with each other as 2A state title hopefuls last Saturday in Tallahassee between Montverde Academy's Riley Novack and The King's Academy's Colton Lawson. Novack ended up finishing third in the race with a season best time of 15:31, while Lawson was one of the top runners this fall in South Florida ended up fifth in the race with a time of 15:51 despite having a season best time of 15:26 earlier this season. North Port's Evan Crane, was an 8th place All-State finisher in the 4A race last week with a time of 15:52 and owns the second fastest season best 5K time in the field at 15:29. He has had a breakout season including a notable win earlier at the North Port Invitational on his home course. Meanwhile, Grant Doherty of Ponte Vedra was racing well in the last couple weeks of the season including a runner-up finish at the 3A Region 1 meet while clocking a 15:30 PR at his district meet as well. However, he missed out on racing at the state meet with the unfortunate timing of coming down with the flu last week and will be anxious to race this weekend in Lakeland as one of the top runners for the North Region squad. It should be a close team battle between the North and West Region squads as well with Novack and Crane leading the the West Region up front, while the North Region is capable of fitting a good number of their top five scorers in the top 10 to 15 places between Doherty, Nicolo Fasanelli of Ponte Vedra, Gavin Nelson of Mandarin, and Drew Birx of Pensacola Christian. Birx was the 1A Region 1 champion in cross country and also earned All-State honors last weekend in the 1A race (11th, 16:18).

The West Region arguably has the most All-State caliber runners on any squad including Crane from 4A and Novack from 2A along with 1A All-State top 15 finishers from one week ago in Hayden Tank (8th, 16:12) of Southwest Florida Christian and Barrett Poe (15th, 16:24) of Tampa Bay HEAT. The East Region squad will be led by Jensen Beach's Nicholas Colbert, who owns a 5K best of 15:48 and finished 7th for All-State honors in the 2A race behind Novack and Lawson last weekend. A special recognition in being selected to the FACA All-Star Senior Classic and might be a first in the meet history is Lake Region's Israel Mirtil overcoming being autistic and earning his spot on the East Region squad. Mirtil ran his 5K personal best of 16:28 on the course at Holloway Park as regional runner up just weeks.

The girls field at the FACA All-Star Senior Classic has a similar awesome story with Boone's Hannah Foley, who is deaf, being selected as part of the East Region squad.