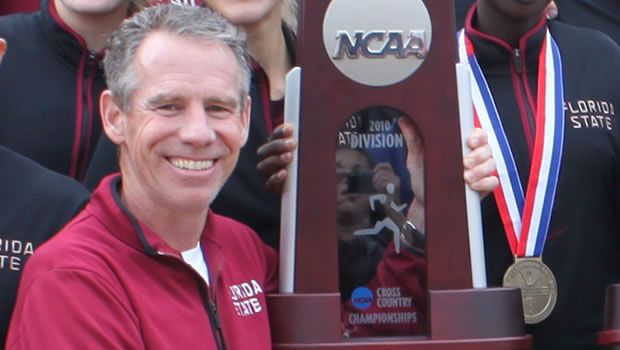 TALLAHASSEE, Fla.– In eight seasons at the helm of the Florida State men’s and women’s cross country and track & field programs, head coach Bob Braman has delivered at a year-round, consistent level of national excellence which has transformed the Seminoles into an elite program.

On Tuesday, Florida State Director of Athletics Randy Spetman announced that Braman has received a three-year contract extension, which will carry through July 31, 2014. It is the second consecutive three-year extension for Braman, who has delivered the Seminoles a pair of NCAA Outdoor Track & Field National Championships on the men’s side and was a mere one-point shy of a third this spring.

“President [Eric] Barron, myself and the university are very appreciative of the outstanding, quality program Bob Braman runs in both cross country and track – in the classroom, the community and competitively,” Spetman said. “We’re extremely excited to be able to extend him.”

So is Braman, who spent three years as an FSU assistant to Terry Long before taking the reins as the head coach at the end of the 2003 track season.

“I’m extremely grateful for the support that our administration gives to our track & field and cross country programs,” Braman said. “It’s humbling for me to be the Florida State head coach and to be able to work with the best assistant coaches and support services in the country.  I’m honored to sign on for another three years and hope to help bring the Seminoles another national championship.”

The Seminoles set themselves apart nationally with comprehensive excellence, thanks largely to the efforts of Braman and his widely-acclaimed assistants, Harlis Meaders, Karen Harvey, Ken Harnden, Dennis Nobles and Jackie Richards.

“He has brought together a tremendously motivated and extremely qualified staff, every one of whom have been essential to the excellence we’ve enjoyed in both sports on the men’s and women’s sides,” Spetman said.

The 2010-2011 school year began with the men’s and women’s cross country programs posting runner-up finishes at the NCAA Championships in Terre Haute, Ind. On the men’s side, it was the highest finish by an Atlantic Coast Conference team as well as any program in Florida as the Seminoles produced a pair of All-American performances. It was the eighth consecutive NCAA Championships appearance by the ‘Noles, one of only 10 programs nationally to make that claim.

The women, guided by Harvey, finished second for the second consecutive year and collected three individual All-American honors. Both teams tuned up by winning ACC Cross Country Championships. It was the first league title for the men and the fourth consecutive for the women.

FSU’s success continued indoors, where the men finished fifth nationally and the women were ninth. The runner-up finish outdoors enabled the Seminoles to capture the John McDonnell Program of the Year award, presented to the nation’s best program in cross country and track & field. The FSU women finished fifth in the tightly contested Terry Crawford Program of the Year award, which is also presented by the United States Track & Field and Cross Country Coaches Association of America (USTFCCCA).

Since taking over the Florida State programs, Braman’s teams have produced 34 individual national champions as well as countless academic and ACC honors, including seven consecutive outdoor track & field titles for the men.