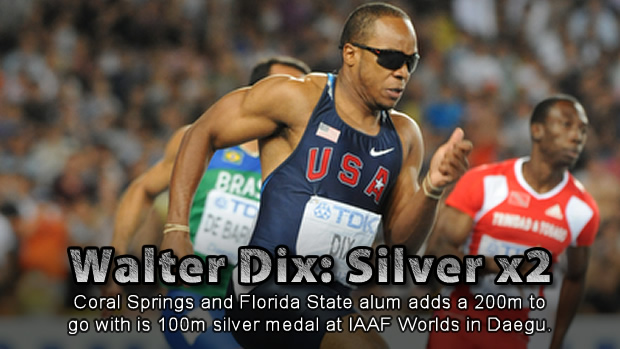 Walter Dix claimed his second silver medal of the IAAF  World Championships, and in the process made it very clear that he will be a factor in the 2012 Olympic Games in London.
Dix, the former Florida State star and current US champion in the 100 and 200, finished second to world record-holder Usain Bolt in the 200-meter dash Saturday in Daegu, Korea. His silver medal time of 19.70 was 1/100th of a second off his all-time best (19.69), which he ran as a Seminole in the 2007 NCAA Regional in Gainesville, Fla.
Bolt won the gold in a world-leading time of 19.40. France’s Christophe Lemaitre, who had the fastest time in the semifinals, won the bronze in 19.80.
Another former Seminole, Ireland’s Ciaran O’Lionaird, saw his impressive march to the finals of the men’s 1,500-meter end with a 10th place finish (3:37.81) on Saturday.
Dix’s second silver of the World Championships – he was the runner-up in the 100 earlier in the nine-day meet – boosted the medal count by former Seminoles to five.
That’s the same number of medals won at the Championships by Great Britain and more than 35 other countries who have claimed at least one medal.
The number of medals by the Garnet & Gold representatives could continue to grow as the meet draws to a close Sunday. Andrew Lemoncello, representing Great Britain, will compete in the marathon.
Florida State senior Maurice Mitchell hopes to get into the action when the US sends its 4x100 relay team to the track in the morning qualifying round. Dix is expected to be part of that quartet, which will be challenged by Jamaica’s Bolt-led quartet in the battle for the gold medal.

“It's great! Two bronzes in 2008 and two silvers here. I knew I had to beat (Bolt) off the curve, because if he didn't, he'd sweep past me. In the future, I'll get stronger, and I'll be better prepared to beat him. I run the curve pretty hard, and you really have to be running to get me off the curve.”

“I’m glad I put USA sprints back on the medal stand, but unfortunately, you saw my race, it was real sloppy with the false start with the guy right next to me, this time it was Usain. You know if they are going to take out a big guy like that, they’ll take me out next, so I’ve got to stay in those blocks.

The first 30m [was the worst part], just like the semifinals, I kept sitting in the blocks and I couldn’t move, that false start was killing us, and hopefully it will change by London. I really didn’t think they would kick him out....they have him on every poster, but I’m sure he’ll be coming back with a vengeance in the 200m, so I have to get ready for that.”