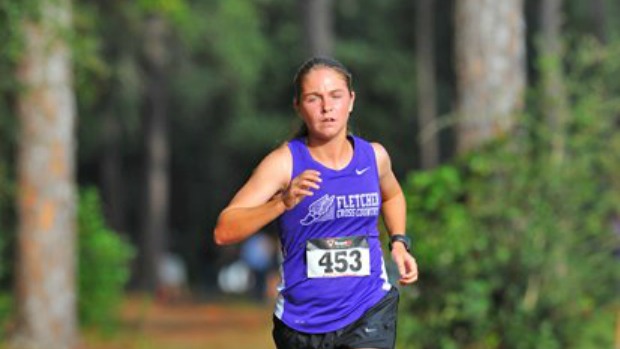 While Eric Tallbacka and Danielle Van Liere earned much deserved individual conference championships, it was the Mandarin Mustangs who cleaned house, winning every team championship of the evening.
In recent years, runners such as Eduardo Garcia, Tyler Mowery, Kamal Koroso, and Christopher Haynes have highlighted the field at the Gateway Conference Championship. Now that three of the 4 aforementioned runners have moved on to collegiate cross-country, it is Tallbacka’s time to shine.
There was little doubt that Tallbacka was one of the favorites, but some might have wondered how well he would run after running a near personal best time of 16:24 just this previous Saturday. At the mile mark, it was two Robert E Lee runners pushing the pace. Dominic Williams and Rayford James brought the pack through in about 5:15 with Tallbacka and Mandarin’s Sam Mack and John Weaver within striking distance. Their lead would be short lived, as Tallbacka would not go away empty handed this year. Tallbacka took complete control of the race, and by mile two, his lead was a comfortable 10 seconds. He almost outdid his performance at Bail N’ Trail by running 16:33 and winning the Gateway Conference Championship. Weaver followed Tallbacka in 16:40 and Dominic Williams in 16:47. As previously mentioned, Mandarin dominated the team standings with only 27 total points.
On the girls’ side, Danielle Van Liere ran much like she has all season. She takes a large early lead, and makes her competitors work extra hard if they want to keep pace. It has worked for her all year, and nothing changed in this race. Van Liere came through the mile in 6:05 with a 9 second lead and had all but put away her closest competitors by the 2-mile mark. Her finishing time said nothing but dominance. Ania Grzeszczak followed her 19:45 closest in a time of 20:34. Again, Mandarin secured the team title.
In the junior varsity races, Mandarin continued to show its team supremacy with wins, and the boys achieving a perfect score. Chase Fowler won the boys’ junior varsity race in 18:12 and Sarah Miller won for the girls in 22:42. It appears Mandarin has secured more Gateway Conference victories for years to come.