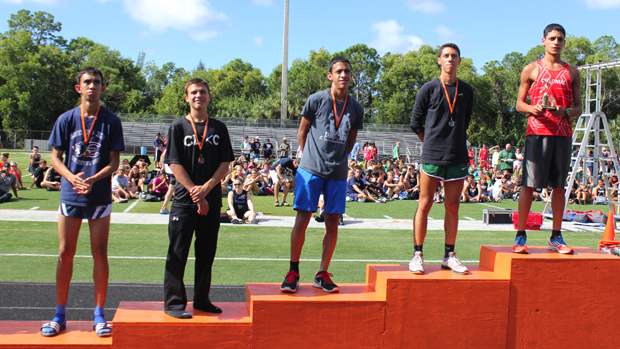 Not known for fast times the Lely HS home course is a twisting, turning, multiple surface affair, which slowly wears down harriers as it loops around the campus. This year, as in other years, most of the teams are going into championship season and rest some if not all varsity at this race but this year it got some special guests.

Last year Carlos Miranda broke the course record held by former Charlotte Tarpon now Florida Gator, Tyler Cardillo by blasting a 15:44. Kathryn Fluehr who is now a Princeton Tiger set the girls record in 2008 with a 18:06. The reigning champ is Sarah Candiano. I knew going into this years meet that Miranda and Candiano would be back to defend their titles.

At 8:00 am came the first surprise of the day. I knew Daesha Rodgers was present with her team from American Heritage. I excited because I also knew that Kacy Smith and Estero were there as were Sarah Candiano, ECS, Caroline Barlow, Gulf Coast, Nicole Mis, Lemon Bay and Lindsay Tomaini, Community School. As I scanned the starting line all off them were there, toeing the line, all except Daesha that is. Sure her team was on the line but she wasn’t. I thought maybe they are resting her, but that didn’t make sense since she has only raced once this season and the championship season is upon us with it’s rules about number of races needed to compete. Nonetheless the gun sounding and off they went with Kacy, Katy, Sarah & Sarah, Caroline and Nicole leading the way but not Daesha. At the mile, shoulder-to-shoulder were Smith & Solis, Estero, Candiano, ECS and Barlow, Gulf Coast followed closely by Mis Lemon Bay, Bethany Jenkins, Estero and Sarah McBeath, ECS. By the two Candiano and Solis had put some space between them and Barlow and Smith with Jenkins trailing not far behind. In the end Sarah was able to pull away for the win in 18:50, 4 seconds over Katy. Caroline, Kacy and Bethany finished off the top 5. In the team scores Estero remains undefeated on the season over Lemon Bay, Gulf Coast, Baker and Cypress Lake in that order.

At 8:01 am came the second surprise of the day. Right after the gun for the girl’s varsity race while trotting to my next photo vantage point I passed Andres Arroyo looking like he just came off a warm up run. “Andres?” I stammered, shaking my head in disbelief. “Yes.” he said without hesitation. “What are you doing here? Are you racing?” “Yes.” was his reply. I was frozen in silence; he shrugged and continued on his way. I snapped out of it and took up my position, clicking away at the girls while my mind spun with the dream that was about to take place as reality. Sure enough when reviewing the starting line there was Andres, sans team, lined up and ready to go. 8:40 sharp the gun cracked and off went the 30+ teams with Carlos, Andres, Bobby Ormsby, Cypress Lake, Alex Pedraza, Golden Gate and Jose Cartagena & Dillon Vallette, Estero leading the way. The mile saw Arroyo at 4:40ish with Miranda 7 seconds back followed closely by Pedraza and Ormsby. Andres kept the hammer down over the next mile pulling the gap out to around 20 seconds. Carlos tried to close over the last mile but was only able to get back less than half the difference. In the end Arroyo won in 15:47, 12 seconds over the charging Miranda with Pedraza, Ormsby and Cartagena rounding out the top 5. Andres won the day but Carlos kept his course record. Estero, one and Palmetto Ridge, two took advantage of Fort Myers resting their top five, taking the top team trophies. Fort Myers still managed third with Baker and Charlotte getting fourth and fifth respectively.

At 9:20 am came the third surprise of the day. Daesha was going to run, but in the JV race. Which she won (duh) by 2:30+. The Fort Myers Girls were the team champions. The boys individual winner was Dylan Gamblin, Estero and the team champs were Fort Myers.

Great racing, great course and enough surprises to fill and school bus. Special thanks go out to Coach McGarrity and his whole staff at Lely,  and Gulf Coast Runners for timing and results.