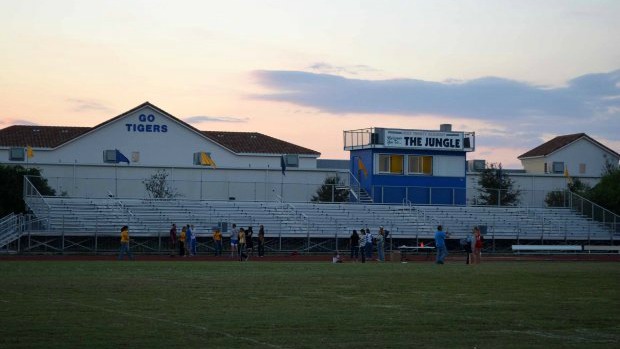 For me, it was my first trip to the ‘Bourne-ies. So if you’re wondering why there are no photos of the Girls’ Varsity, you can blame it on my distance run. (184 miles, round trip; ouch! But at least gas had just gone down some, to $3.33 a gallon.)

After arriving late, my second big surprise was 1A cross country. After a steady diet of 4A, it took me awhile to become acclimated to my surroundings. It was a small meet (six teams), but big on enthusiasm. It isn’t every day that you see parents pacing their kids…with cameras, no less, or an open race…a really open race. You’ll be relieved to know, however, that there weren’t any strollers, though. What there was, in ample doses, was pride. I liked that.

In this neck of the coast there is Holy Trinity (on the upper campus; have to remember that the next time I’m late), and then there’s everyone else. So if there’s HT on your blue singlet, a District race is actually a fartlek workout. In this one, Alex Brown (17:09.23) and Cole Oliver (17:09.23) separated from the pack in the final 400 and finished nearly together. 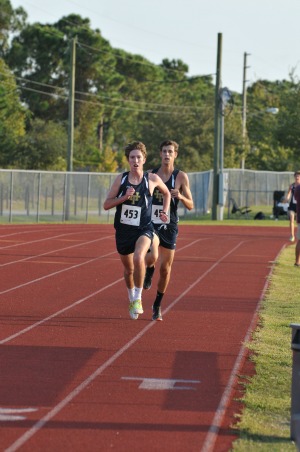 Alex: “We wanted to run as a pack until the last half mile. That was to help one of our teammates, Michael Cacciatore”—seventh in 17:48.95—“PR. He wanted to go sub-18. I just wanted to keep the pace (for him).

“We have done this before. We just follow the plans the coach sets.”

Alex: “At Region and State we’ll open it up. We’re all going to try to PR; run as fast as we can.”

Cole: “Right from the start.”

Alex: “Obviously, winning the State Meet as a team is our primary goal.”

Cole: “For the team, we’ll be trying to put as many guys on the podium”—top ten climb the steps—“as possible, and as Alex said, to win as a team.”

Alex: “Our coach, Doug Butler, knows what he is talking about. He makes a plan for every race. At Districts, we generally take it a little easier, and help someone else set a PR—because that’s the meet that determines the final varsity team.”

At that point, three HT runners—all three eighth graders—swept past with pained expressions on their faces.

Alex: “In the open race, there are three guys competing for the (District) varsity race. The winner goes on to the Regionals.”

Cole: “And the State Meet.”

“I had three boys and three girls in the open race, each competing for a spot in the Regional and State Meet. These kids have been on and off varsity all year.

“He is my second eighth grader on the varsity,” continued Butler.  “The other is my #5 runner, Trevor Kattenberg, and he runs 16:40.

Prior to this meet, Michael’s fastest 5K was the October 13, 2012 Holy Trinity Fall Classic, where he finished in 18:32.49. In this meet, with the help of his coach and team, he finished out his high school career with a 17:48.95, and did so in grand style. With yards to go, Luke Blanchard of the Brevard Heat attempted to kick past, and in fact did have a momentary lead. Michael, however, prevailed, and won by .27 second, thus becoming the seventh finisher for Holy Trinity. 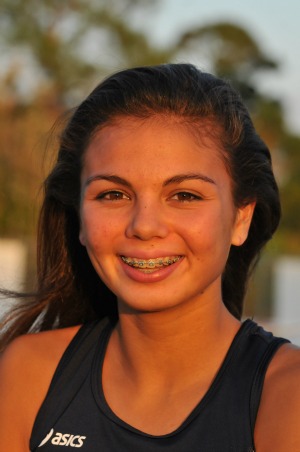 Coming in with 17:20.16 track and 17:31.79 cross country bests—both at Holy Trinity home meets—sophomore Julie Wollrath had nothing more to prove this in this event, than that she was the fastest in the race, something she accomplished in 19:57.22.

“During the season, we pretty much run the races hard, and as individuals. At Districts and Regionals, we’re sometimes able to take it easy.” However, “winning the State Meet, that’s pretty much the goal each year.”

Footnotes: I wish to acknowledge Coach Doug Butler’s cordiality, race results, and compassion. (I probably should have served some sort of detention for being tardy, but he probably took the drive home into consideration.)