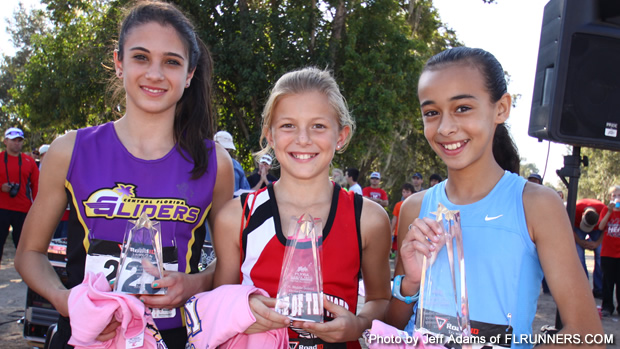 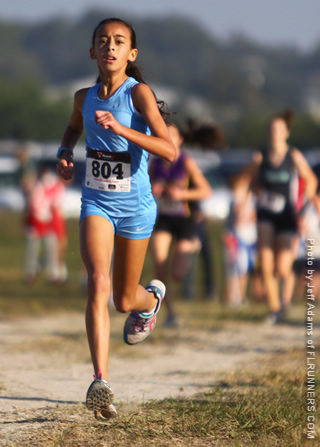 It was a beautiful 65-degree morning at Holloway Park in Lakeland. Upon arriving at the venue, the fog draped heavily over the ebbs and flows of the property, consealing its distinctive personality. But by the time the coaches meeting rolled around at 8:30, the blanket of mist had mostly lifted, as kids warmed their legs with stride outs up the initial climb just 100 meters into the course.

The girls championship race was first on the agenda at 9AM. Coaches no doubt warned their kids to take it easy on the first mile--this isn't your average pancake Florida course--some listened, others paid the price. Mary Grace Sonksen attacked it bravely, earning the early lead and taking the front pack through the mile. Rafaella Gibbons of Glenridge Middle and Katie Pinnell of North Borward Prep kept a close watch on her just a few steps back. Biding her time back in the pack--just as her dad instructed her to do--Bridget Morse of Eye of the Tiger paced herself early, coming through the mile mark around ninth place. Mary Grace Poling had a similar plan, running about 12th place at that point.

About 600 meters later, they again emerged from the last finger of the course with another 600 left to go. Sonksen held on to a three meter lead, but not for long. Representing the Central Florida Gliders track club in their signature purple, Sonksen hadn't been able to shake her shadow; Gibbons was just waiting for her moment. Meanwhile, since we last saw them Morse and Poling methodically picked their way up through the pack and were now sitting in third and fourth place, just steps behind Gibbons.

As they entered the final low trail--sort of a canopied tunnel winding its way toward sunlight again where it opens up for the home stretch--Gibbons made her move like clockwork, exactly at nine minutes she told me afterwards. The Orlando native picked up the pace and earned her first state championship: a 11:41 personal best for the seventh grader. This was Gibbons' second time running this course. She won the Jim Ryun Invitational--about 25 seconds slower--in September on this same course, which was the first race ever run at Holloway Park. Gibbons came in with the state's leading 3K time of 11:50 from Alligator Lake, a much faster course than this one, so her 11:41 PR on the difficult Holloway course is all the more impressive.

Morse rode her momentum of picking through the pack into the the homestetch. After slowly making up ground foot-by-foot, she finally overtook Sonksen as they approached the finish. The seventh-grader edged out eighth-grader Sonksen by just half a second to end in the runner-up position with an 11:46.0. Poling maintained her fourth place position to end in 11:49.8 and Pinnell held on for a fifth place 11:53.20.

That wasn't the end of then fun for Bridget Morse though. Her attention then turned to her team, who did exactly what they were expected to do... win! Eye of the Tiger Track Club (a.k.a. Lake City Middle school) were favored coming in and did not disappoint. They scored 64 points with three in the top ten and a 12:32 team average to win big over second place Pine Crest's 105 and Shoal River's third place 107. 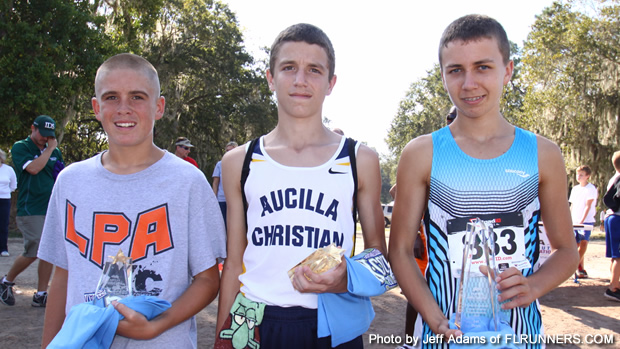 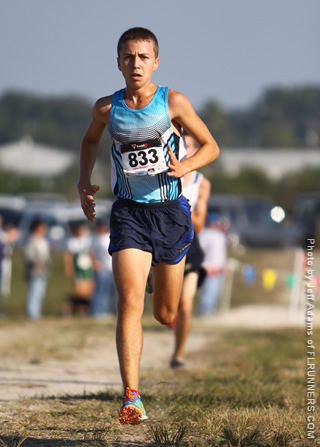 The boys race went off promptly on schedule at 9:30AM, and it was far less dramatic than the girls race. The leaders were established very early on. By the 400 meter mark, Julian Elortegui had over taken an early rabbit to establish himself as the leader and he never relinquished.

By the mile mark, the eighth grader had established a good fifteen meter lead over second place Gatlin Nennstiel. Going into the race Julian did his research and knew to expect Gatlin to be his top competitor. The GW Carver Middle School student led the way through the mile in around 5:00--very quick for this age bracket even at the 3K distance--perhaps he wanted to break his competitors early. Nennstiel, also an eighth grader, hung back but did not lose sight of his target. The Aucillia Christian student-athlete went through the mile slightly more conservatively (but still on the fast side) around 5:08. Just behind Nennstiel through the mile was a chase pack led by Caleb Pottorff of Lincoln Park Academy. Not 100 meters later though, he started to get a little sunlight with ten meters of padding that he would only extend from there and it would be a two man race from there on.

Coming off the back finger and headed toward the low trail that leads the finish, Elortegui had ever so slightly laid off the gas. By that point there were only three other runners that could see the leader on the long straight through a little valley around 2,400 meters in. The order had not changed behind him: Nennstiel, Pottorff, and Mason Jones. All were evenly spaced about fifteen meters apart.

Down through the canopy with 600 meters to go, Gatlin started to make a bit of a move in an attempt to close the gap or at least not let it widen. He may have been helped in that effort by the five-minute-mile pace finally taking its toll on the leader. Emerging from the woods, it looked possible that Elortegui might surrender the lead he had so far maintained for 2,800 meters of the 3,000 meter race. Nenstiel closed the gab to less than a second, but with a determined look on his face coming down the last 100 meters Elortegui seemed to stare through the finish line and that focus carried him home.

He held on for a state championship time of 10:21.60 with Gatlin Nenstiel just 0.7 behind in 10:22.30!  Pottorff held on for third place in 10:34.40 with Jones seven seconds back in fourth. All of the top four competitors were competing unattached, and in fact you had to wait all the way to sixteenth place before the #1 runner from the eventual team champions came in. Eighth-grader Nick Cummings of Ammons Middle School came through at 11:13.9 and within another ten seconds he had two more teammates across. Ammons finished with a 43 second 1-5 split (11:33 average) to win with 85 points, over second place Liza Jackson's 141.

Middle school cross country on the state level is still growing by leaps and bounds, but it was a record turnout by all accounts. 217 boys and 202 girls finished in the championship division. Another 202 crossed the line in the mixed-gender open division.