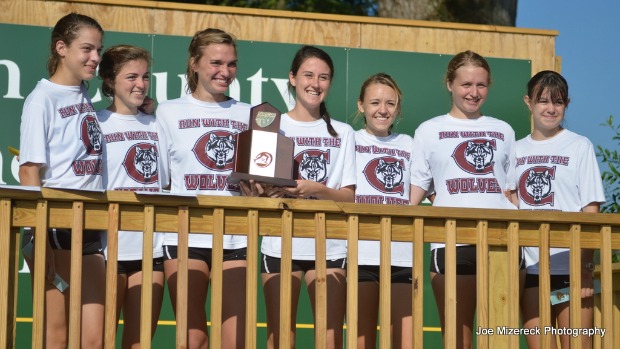 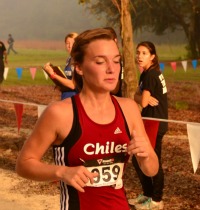 Nine high schools, 18 teams, and 131 athletes took to Appalachee Regional Park for the 3A District 2 Championship. Runners graced the Tallahassee course as their journey to the state meet got one step closer. In the girls race it was all Rachel Givens of Chiles while the boys race came down to a photo finish between Cade Zimmerman of Chiles and Sukhi Khosla of Leon. Chiles swept the team titles as well.

The top fifteen individuals and top four teams advance to the 3A- Region 1 meet next week at Sunny Hill Farms. The girls were up first and looked to punch their tickets to the next round.  Chiles senior, and former Warrior of the Week winner, Rachel Givens continued to show her North Florida dominance. Givens led the race from the get go and put it on cruise control to win in a comortable fashion. She crossed the line in 19:32.62, nearly 17 seconds faster than Columbia freshman Emma Tucker's 19:49.55. Givens finished third in 2011 behind teammates Lily Williams and Carly Thomas  in 19:17.61. She went onto finish fifth at state. Teammates Sara Lane, Ashton McMurray, and Leon senior Autumn Wable rounded out the top five in a great finish that separated the trio by just one and a half seconds.

For another year, it was the Chiles girls that dominated the team standings. In 2011, the Timberwolves posted 19 points for the win. This year, 30 points got the job done as Coach Gowan's squad took home the district championship placing their top five in the top twelve spots with a 20:20.95 team average. Stanton College Prep was second with 54 points. Columbia was third with 74 points, and Leon High School was the last team to advance onto regionals with 102 points. 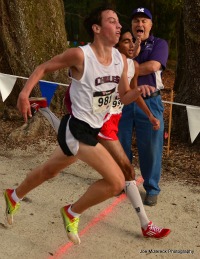 The story of the afternoon (as told to me by the dynamic duo of Doug Covert and Joe Mizereck), was a battle down to the wire between Chiles junior Cade Zimmerman and Leon sophomore Sukhi Khosla. I ran the compare athletes feature on flrunners.com to see how the two fared over the course of their careers. On the track, Khosla has the faster 800 and 3200 meter times and is within three seconds of Zimmerman in the 3200. Their 5k personal bests: 15:41.30 for Zimmerman, 15:42.30 for Khosla That was at the Panhandle Championships. Khosla got Zimmerman earlier in the year at the Lion's Roar so who would break the best out of three tiebreaker?  The two ran together to the very end and it was the junior Zimmerman who edged out his younger counterpart by what was described as a "hair", less than two tenths of a second, 15:57.63 to 15:57.87. Stanton Prep's Eric Tallabecka came in nearly twenty seconds later in third with a time of 16:15.25. Then it was more of the same as Chiles senior Will Spier and Leon senior Will Henderson came in fourth and fifth.

It was a two team race for the team title between Chiles and Leon and those two spots determined the district championship. Last year Chiles beat Leon 38-44. This year was even closer.    Three points separated the two teams with Chiles coming out on top for the second year in a row 40-43. The Timberwolves swept both team standings on the afternoon and claimed two individual champions. They compiled  an impressive team average of 16:31.79. Stanton Prep (79 points) and Robert E. Lee (89 points) finished third and fourth to advance to regionals as well.