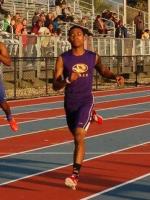 Salute To Seniors: Devonte Gibson - Boynton Beach Commu...
The 2014-2015 school year has provided some great highlights in both cross country and track across the Sunshine State. In the coming weeks many of our seniors will head out to start their college car...

Who Won The Weekend? All-State Results Merge...
Everyone loves a "what if scenario right? So, we took all the results from the weekend, merged them together and found out who really won the weekend. Check it out for yourself! If you want to be the ...

Week in Review: Ten US#1 Performances Top Week Two...
We thought the opening week of the 2015 track and field season provided fireworks, but were out done this week. TEN nation leading times were set with several athletes barely missing out on US#1's. Ch...

The Cutoff - Boys Track Individuals (2/5)...
Check out the boys individual qualifiers so far on the track for the 2015 New Balance Nationals Indoor!...