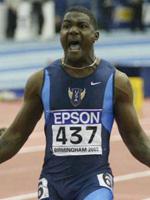 Golden Moment: Spearmon, Gatlin, Interview Each Other...
What happens when you give two Olympians the microphone and let them interview one another? Wallace Spearmon asks Justin Gatlin which marks he'd rather hit in the 100 and the two make a bet you'll onl...

No More Mitchell: What's Next For Justin Gatlin?...
With Justin Gatlin announcing he will leave coach Dennis Mitchell and his Clermont based training group, what is next for the world champion?...

Usain Bolt Loses His Last Ever Worlds 100m Race To Just...
Usain Bolt may be the greatest sprinter of all time. But in his last year of competition, Bolt was not the greatest on the planet as he was defeated in the 100m final by Americans Justin Gatlin and Ch...

Friday Olympic Recap: Relay Woes Continue For Men’s 4...
The men's and women's 4x100m relays highlighted the second to last day of track and field competition at the Olympic Games. The women brought home the gold medal, while the men looked like they had th...