Kyra Swart, a 7th grader out of Tallahassee, was one of the biggest storylines and stars coming out of the 2021 FLYRA State Championships on Saturday at IMG Academy in Bradenton.

Swart won three individual state titles on the track including a meet record time of 27.84 in her final and third race of the day in a matchup against the likes of another age-group track star in D'Asia Duncan. It was certainly her toughest race of the day to win and one of the first times that she competed in the event as apparently one of the first times she raced the event before the hurdles were set on the wrong markings throwing off her steps. No issues with the markings and steps on Saturday at IMG besting the winning times of all other prior FLYRA champions.

Earlier in the meet, Swart ran a clean and sound technical race from start to finish in the girls' 100-meter hurdles with a 15.00 victory. By mid-race, she was pulling away from all other competitors not touching a single hurdler set with the same steps and same form virtually replicated between each.

Coached by her father growing up as her parents are natives of South Africa and running in meets since she was a toddler at the age of two, Swart recently joined the Tallahassee Zoom Track Club to continue seeking greater gains and coaching under the direction of that program while she splits time with her other sport in soccer.

Her second win of the day was a mild surprise as was not projected as top seed or favorite in the event running down in lane two of the 400-meter dash, but pulled away from the field with a strong last 100 meters close running over a full second PR in 57.23 performance.

Being only a seventh-grader, Swart will have the rare opportunity to return to defend all three state titles in 2021 as many of the middle school state champions are often eighth-graders and have moved onto the high school level. 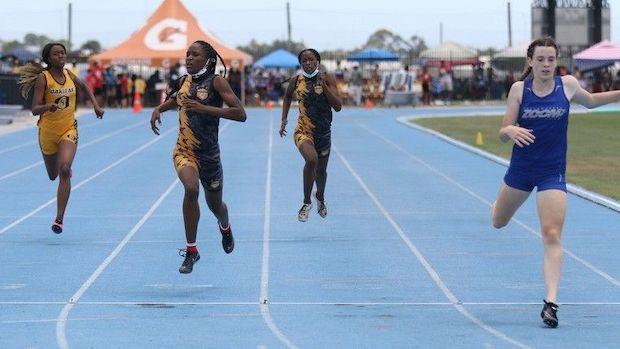 A past middle school county champion in cross country, Swart has both the range, endurance, and athleticism to propel herself to a very bright future in the sport. She's is zoned and slated to attend Chiles High School when she gets to ninth grade, which her older brother Cade is already a developing hurdles talent for the program just completing his freshman year himself qualifying for the regional level in the 300-meter hurdles with a 41.74 best.

We will have to wait a little longer for the younger Swart in Kyra to shine on the high school level, but there is no doubt that success will await her when she arrives.