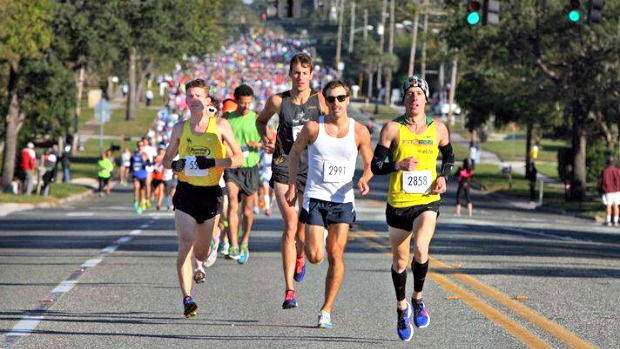 Former St. Petersburg Northeast and Webber International distance runner Jon Mott is now making his mark on the road racing circuit. Mott recently competed in the USA Half Marathon in Houston where he placed 41st out of 70 runners. Former Florida Gators Enoch Nadler and Jeremy Criscione also competed and had successful showings. We caught up with Mott to talk about his high school and college careers, as well as his new passion for road racing.
How did you get started in distance running?
I started running cross country at Northeast High School my junior year and had some success as I was pretty sure that I found my sport after my many attempts with other sports. Coach Larry Rudisill and Coach Tim Russell really developed me to make me the runner I am today. I finished my high school career with a cross country PR of 16:34 and track; 800m- 1:59, 3200m: 10:20. I was a state qualifier in both cross country and track. I wasn’t the fastest runner but it was fast enough to earn me a scholarship to Webber International University where my career really began.

What was the recruiting process like for you out of high school?

While being recruiting at Northeast High School I had several choices to choose from even though the school that I was wanting to go to. USF didn’t show interest so the decision to go NAIA was set. Rick Moody from Webber International University spoke very wisely and convinced me that Webber was the place for me. I didn’t like the idea of being surrounded by orange groves, but I trusted him and ended up getting use to it. Starting off there was not much success at all. The training is much different then high school and you have to be able to handle it. You have to be consistent and not show any doubt. It was rough for me as Coach Moody departed my freshman year but Coach Ormsby took over and really showed me that I had the potential to be a good runner and he is a really big factor in my success.
Your college career got off to a slow start, but you bounced back and got back on track. What will you remember the most about your time at Webber?
My career at Webber started off with me being red shirted my first year as I had a double hernia surgery that took me out. I was able to come back for track season and drop my PR in the 5k to 15:57 under Coach Rick Moody. After my first year Coach Peter Ormsby took over as the head coach and I really started to take the next step to achieving my goal, and that’s to become an All-American in either cross country or track. This is because I had qualified for nationals for my first time that year.  My junior year Coach Ormsby and I decided on giving the half marathon a try because I could qualify for Nationals that way for the marathon distance. I ended up with a 1:12 and the “A” Standard. At Nationals I finished 12th place that year. My senior year things really got serious as I knew I had a great shot at achieving my goal. Coach Ormsby was very determined on making this happen as I finished 4th that year and got my All American honors. I ended my college career as a 3x National Qualifier in XC, 2x National Qualifier in Track, and as an All American.
At what point in your career did your running really take off?
I would say that my running really got started at the beginning of last year as I gained much confidence running the double at Gasparilla where I was 2nd in the 15k and won the half in course record time in the same weekend. My times were good enough that weekend to make me realize that I am a lot faster then what my races have been showing lately because I was able to do that double. I am being coached by Rick Moody once again which I thought was pretty cool. He has had much success with training runners as he coached Jeremy to hit the Olympic Trials standard. I finally got used to his unique training methods that ended up gaining me much success. My first race to where things really got started was the Philadelphia Half Marathon last September. I ran 1:06:46 and knew that I was getting pretty close to qualifying for the Olympic Trials, which is 1:05:00. I just figured that 1:46 isn’t that much time over 13.1 miles. Roughly 8 seconds per mile. So I decided that I wanted to attempt another half marathon and that ended up being the USA Half Marathon Championships in Houston Texas.


What type of training do you do to prepare for the half marathon?
I would definitely consider myself more of a mileage guy. I used to show some potential at the shorter distances but that first half marathon is when I knew I had found my “bread and butter.” I follow a very basic schedule that allows me to do the training needed while also getting the proper recovery. I’d say my sweet spot, mileage wise, is between 90-100mpw even though I have done more before. For my long runs I usually stay between 18-20 miles. My paces are normally pretty slow on recovery days but on the workouts is where I really crank it.
You placed 41st in 1:05.49 just ahead of Jeremy Criscione. What was that experience like for you?
This race was a very fun experience. To get started, to qualify for this race you have to meet their standards which is sub 1:09. Luckily enough I had my 1:06 from Philly that qualified me. They treated the runners so great. There ended up being about 200 total runners both men and women. Might not sound like much but these were basically the fastest runners in the country for the half marathon distance. That being known I knew I was here to just run a nice PR. Sunday morning arrived early as I woke up at 4am to do a shakeout mile with Jeremy Criscione. As race time approached I parted ways with my girlfirend Stephanie Lucas who made the trip to support me then I ended up being on the same bus as Jeremy and we just so happen to sit next to Enoch Nadler. I thought it was pretty cool that us three Florida guys were here together for the first time that weekend. Jeremy and Enoch both are UF alums, Enoch now lives in Texas and Jeremy trains in Gainesville. Once we approached our starting area tent for all the elite runners we went for our warm up, the three of us. I was definitely nervous but Jeremy and Enoch were helping with keeping a clear mind. The gun went off and the pace shot out. I’m pretty sure I was close to the back 10 runners that first mile and I split 5:01 which blows my mind but I knew I was good. I came through 5k right on the pace I was wanting. The miles just kept clicking away as my splits were 5k- 15:37, 10k- 31:15. 15k- 46:48. I ended up passing many runners in this process and eventually crossed the finish line in 1:05:47. I was super happy with my performance. It was probably the most consistent race ever for me as my slowest mile was 5:04 and my fastest mile was 4:56. From this point in my career the main goal is to hit that trials standard. 47 seconds just seems like such little time to not make another attempt. So the quest begins.
What's next for Jon Mott?
As of right now I am still being coached by Rick Moody and live in Babson Park, FL. I train solo in the orange groves and have a good job that allows me to train at the level needed. I really don’t do anything but work, spend time with my girlfriend Steph, and run. So, this being said I haven’t had an unexcused day off from running in years. For the year 2013 I ended up running 4,056 miles, which I even thought was pretty crazy. I am also a member of the Fit2Run Elite racing team that has many locations throughout the state. They hook me up with shoes and gear which is very helpful. For my race schedule, I’ll be doing the double again at Gasparilla (15k/Half) then start my build up for the Philadelphia Half Marathon. The main focus though will be the Houston Marathon that I have planned next January. It will be my first marathon in quite some time so I’ll be looking for a huge PR.