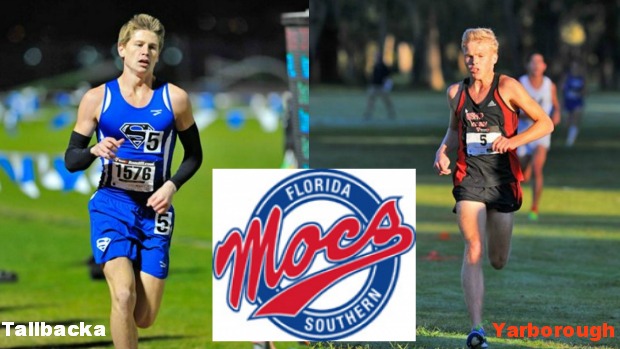 Don't tell Florida Southern they can't recruit with the big boys. Coach Ben Martucci landed two of the top distance runners in the state, in Bishop Kenny's David Yarborough and Stanton Prep senior Eric Tallbacka.  Martucci says he wanted to sign two very successful runners to fill spots vacated by current seniors.
" It was more or less the team that got them here and their belief in what we are trying to accomplish here at Southern. I believe David and Eric want to thrive in my system here. These guys will step in and nearly fulfill those spots immediately with their talent."
Tallbacka, who finished fifth in the state as a junior in the 3200m, and fifteenth at the 3A Cross Country Finals,  considered the state's division 1 programs such as UF, FSU, and FGCU along with some smaller schools up north. He took notes of how the Mocs competed against some of those programs and other Division 1 programs as well as their recent success winning the Division 2 South Regional and advancing to Nationals. He says he had a great relationship with Martucci and the rest of the team from the start.
"The team is awesome, I hung out with them the weekend before signing day and they immediately treated me like family. They're a really close knit group that I meshed with well. The smaller school size really interested me because I wanted to be a large fish in a small pond rather than being a small fish in a large pond."
Yarborough ventures down I-4 from Bishop Kenny in Jacksonville to the Lakeland campus. His impressive resume includes a runner-up finish at the 2A Cross Country Finals and a 1600m state championship as a junior. He boasts personal best times of 1:57.95 (800m), 4:20.89 (1600m), 9:25.06 (3200m), and 15:59.81 for 5k.  These additions, plus first year runner Bobby Ormsby and depth to fall on in their older runners, Martucci says the future for Florida Southern looks bright.
"I see limitless potential with a state champ in David and the strength running of Eric. We have so much to experience and so much to look forward to with our incoming class. It's truly exciting and I know our current runners are overly excited for what the future may hold for the MOCS. We're blessed with true talent and a mentality that I believe will carry us the distance. Keep an eye out, the Mocs are looking to make a strong push for a bigger, better run than we've ever had."