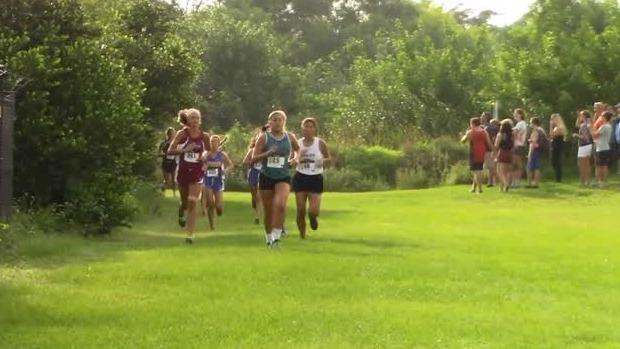 Besides some heavy showers, the Park Vista Cobra Country XC Invitational was a great success. The invite was held at South County Regional Park which is where the traditional 5k Spanish River course is held. The race for people who don't know is a two loop course with a hill at the end and a nice straight finish.
Starting off bright and early at 7:30 a.m. was the boy's varsity race. The entire pack started off tight within the first half mile. Nearing the mile and a half mark, William Shine from Archbishop McCarthy was leading a decent size group. Pacing right alongside him was Spanish River's Jake Noonan and Highlands Christian's Ryan Szklany. When all three came back around, it would be Szklany who created a gap from the front runners by nine seconds. Szklany won the race running a 16:30.17. Coming in second and crossing the line at 16:39.13 was Noonan and third was Shine with a 16:42.42. Overall, Spanish River high school would take home the team title, winning with 41 points.
Next up was the girl's varsity race. One of south Florida's top performers, Rylee Pustilnik was in the race. Last week we saw her win at Fleet Feet with a time of 19:06.50. This race we saw her take the lead once again and finished with a personal best of 18:43.04. Pustilnik will be racing at this course again in two weeks for the Spanish River Invite and hoping to continue her win streak. Coming in second at 21:12.49 was Mia Rodriguez from The King's Academy. In third was Harley Simonson from South Florida Heat running a 21:34.04. In the end Boca Raton high school won the team title with 68 points.
Moving on to the boy's JV race. Paul Welpa from Boca Raton came in first by almost a minute from the rest of the field. Welpa ran a winning time of 19:33.76. Coming in second was Palm Beach Central's Zach Wolf who ran a time of 20:30.28. Third place went to Wolf's teammate, Maverik Davies, who ran 20:33.48. Overall, Spanish River high school would take home another team title.
Finishing up was he girl's JV race. Towards the end it started to rain heavy but that didn't stop the girls from competing. Boca Raton's Kaya Barker and Dara Torbica came one two. Barker won with a time of 24:42.19 and Torbica finished second with a time of 25:14.03. Behind Torbica was Park Vista's, Megan Centrella, who ran 25:19.77. Just like the girl's varsity, Boca Raton took home another team title.