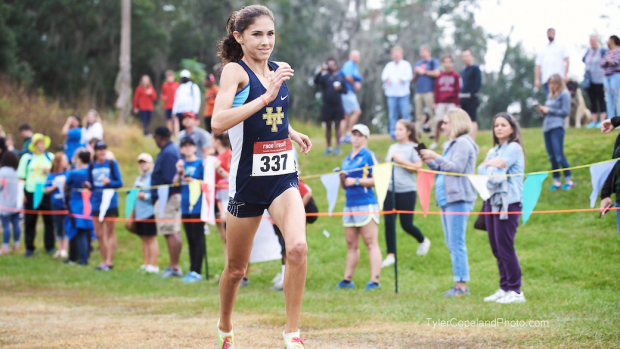 Individuals and teams battled it out on the cross country course this weekend all over the state. We recapped all 16 regions so you can stay in the know on the top storylines from this past week. Here are the recaps and takeaways from all the FHSAA 1A regional meets.

It was a fast day on the Cecil Field course. With temperatures in the low 50s, a dry golf course fit for speed, and many athletes peaking at the right times, 1A-R1 saw many PR's.

Gianna Forte and Laci Watford battled it out again, just like districts. Forte pulled away towards the 2.5 mile mark to take the win in a time of 18:23 with Watford right behind in a time of 18:28.

The Maclay Girls had a strong showing with a 20:17 average, winning the team title in 48 points. Bishop Snyder finished second with 88 points and a 20:43 team average.

Junious Brown ran a huge PR to win the boys race in a time of 15:46. Ben Kailes out of St. Johns Country Day had a very strong day, also running a PR of 15:57 to place second.

Providence boys showed up with lead freshman, Steven Cartwright, leading the way for the boys to win the meet with a 17:17 team average, 1:39 second split, and 69 points. Pensacola Christian Academy boys took second.

Congratulations to all the teams from 1A District 2 who raced for the first time since Hurricane Michael made its way to the coast. Xander Peacock out of Blountstown ran a massive PR of 16:31 to finish fourth and qualify for the state meet next week.

A storm was brewing in Gainesville prior to the Region 2 race. A young field took the top three places in the girls race with Oak Hall freshman, Lauren Jones, leading the way in a time of 18:56. Lauren took the lead from start to finish and pushed the pace solo for the duration of the race. Katie Beam, an eighth grader out of First Baptist Academy, finished second in a time of 19:42.

The Oak Hall girls captured the team title with 62 points with Out of Door Academy taking runner-up with 103 points.

In the boys race, it was a battle for first and second till the last mile. Austin Montini and Philip Henderson took it out and Montini pulled away to win the region title in a time of 16:17. Henderson, a junior out of Admiral Farragut Academy, took second in a time of 16:36.

John McKenzie led the Seffner Christian Academy Boys to their first ever team regional title with 82 points. The Seffner boys finished the race with a 17:39 average and a 2:24 1-5 split. Oak Hall boys took second place with 96 points.

1A Region 3 raced prior to the significant temperature drop. The cold front came in after these athletes competed.

Carly McNatt continues her stellar season with a 17:23 on the Holloway Park course. Breaking her own course record by over 20 seconds! She took the lead from start to finish and pushed the pace on the Holloway hills.

Sinkenesh Parker finished strong in a time of 19:04 to lead the Circle Christian girls to the team win in 37 points. Mary Peck and Claire McDonnell led the Father Lopez girls to a second place team finish with 64 points.

Seth Martinez, a junior out of Lakeland Christian School finished third in a huge PR of 16:45. On the Holloway Park course, these athletes are ready to rumble this week at the state meet. They are prepared.

1A Region 4 will be well rested and ready to go on Saturday. They raced this past Wednesday, so they have plenty of time to recovery and gear up for some fast performances come this weekend.

Sena Erickson, a senior out of Boca Raton Christian, won the race in a time of 19:34 with Abigail Rashid, a freshman out of Florida Christian School, following for second in a time of 19:53.

Miami Country Day girls brought the competition with Lauren McGaffic and Rachel Hodes running 19:56 and 19:57 to lead the girls to the team victory in 52 points.

It was battle for first on the boys side with Joseph Anderton, a junior out of South Florida HEAT, capturing the win with a time of 16:06 and Jonathan Pitchford taking second with a huge PR of 16:09.

Cameron Dunn and Jacob Dillistin led The King's Academy to the team title in 52 points.

Reilly May ran a time of 17:37 to lead the Palmer Trinity School boys to a second place team finish.