With over 60 schools entered and more than 1,800 runners expected to race, Friday's Cecil Field Summer Classic has gathered many of the state's top-tier teams and runners across different classifications for an impressive early-season clash in Jacksonville. flrunners.com will be on-site with race video and photo coverage.

Meet director Richard Fannin has done an outstanding job in recruiting and promoting this event in just 5 years of existence to quickly become one of the top caliber events for the first official weekend of high school cross country season in Florida.

The boys' field is loaded and deep with the best of the best in Florida including 7 of the top 9 ranked individuals in the state as well as 6 of the top 9 ranked teams in Florida. There is no doubt that the rankings will be shaken up completely and the current pecking order will not last with so many head-to-head battles to come. Leon's Patrick Koon might have the 11th fastest 5K time in the field at 15:55, but the sophomore showed this past spring by running a 9:07 freshman state record in the 3200-meter run that he is ready to drop that time significantly and might do just that at Cecil Field on Friday. Viera senior Michael Toppi is the top returnee from last year's Cecil Field Summer Classic when he opened his season with a swift 15:34 runner-up effort just behind graduated Nease runner Anderson Ball (15:33). Toppi will be looking to not only get the individual win on Friday but also lead his #1 ranked squad to a title over a strong field of challengers. Justin Wilson of Satellite already opened his season at the Wickham Park Jamboree and impressively ran just over 16 minutes in muddy conditions and a downpour of rain. That will likely be his slowest race of the season and will get an opportunity against great competition with better course conditions on Friday to run closer to his 15:02 5K personal best.

Both Matthew Stratton and Nick Carpenter broke 16 minutes with top 5 finishes in last year's Cecil Field Summer Classic coming off track seasons where they dropped their 3200 times down significantly at 9:22 for Stratton and 9:12 for Carpenter as state champion hopefuls this fall in 1A (Stratton) and 2A (Carpenter) respectively.

Jake Rogers of Leon and Jackson Yarbrough of Maclay while not flashy track times recently showed last fall what they are capable of doing on a cross country course and will give us another reminder likely on Friday. Rogers was 3rd in the FHSAA 3A State XC Finals, while Yarbrough was a close state runner-up in 1A as they both ran 15:46 on the state meet course in Tallahassee.

The list goes on with more outstanding individuals to mention as well as a great opportunity for that next tier of athletes to finish ahead of the 7 runners ranked currently among the top 10 in the state.

The team battle will be nothing short of fascinating with the exception of FL #3 ranked Belen Jesuit missing, includes virtually all of the teams in the state capable of ending this 2021 cross country season as the outright best team in Florida. #1 ranked Viera, #2 Bolles, and FL #4 Satellite all have the lineups and talent to be Florida's fastest squad this fall. Viera returns 6 of their top 7 from a 2020 state runner-up team in 4A including 3 runners who finished in the top 10 at last year's Cecil Field Summer Classic between Toppi, Cameron Raney (9th), and Robbie Naberhaus. There is no question that they have a very strong top 3, but their vulnerability or question mark in matching up with the likes of Bolles and Satellite will be how their #4 and #5 runners perform head to head with those team.

Bolles has great depth including 5 runners who broke 10 minutes for 3200 meters this past spring. Their 5K times from prior cross country seasons translate well too with William Brady at 15:43, Colin Duhnoski at 15:48, and Matthew McClure at 16:07 among the top times for their returnees. The early head-to-head matchup with Satellite will be very compelling as they are the two likely programs that will be expected to vie for the 2A state team title in November.

Speaking of Satellite, a team that initially was thought to take a step back perhaps graduating the likes of star runners Josh Stern, Gabe Montague, and Joe Wester from their historically successful 2020 squad appears to be reloaded quickly. At the Wickham Park Jamboree, Satellite won the team competition racing against a short-handed Viera squad holding out their top two runners Toppi and Naberhaus.

However, if Toppi and Naberhaus still raced it appears that Satellite would have still come out on top in the team standings. Will see how the teams match up at full strength on Friday along with their chief threat to repeat as 2A state champs in Bolles.

Two other teams to pay attention to, as well as local rooting interests in the Jacksonville area, are a pair of 4A squads in FL #6 ranked Creekside and FL #8 ranked Bartram Trail. Both teams despite being ranked among the top 10 in the state have gone quietly under the radar and have a chance to gain a bit more attention if they track down or be competitively close with that top-tier group of squads in Viera, Bolles, and Satellite.

The girls' field is highlighted by the #1 ranked team in the state in the 2A defending champions from Bolles, while Timber Creek and Mandarin are both ranked in the top 10 in the state and among 4A's best. Over a half dozen girls in the race with PR's under 19 minutes for 5K and nearly 30 runners under  20 minutes for 5K. Timber Creek senior and defending 4A state individual champ Amber Schulz is the top name and would appear to be the race favorite on paper. However, she is coming back from a long layoff during the outdoor track season due to injury and is easing her way back into racing as shown last week at the Mike Gibson Summertime Run when she helped pace a teammate en route to a fourth-place effort of 20:26. She may take it up a notch this week, but do not think she is quite yet at her state champion and 17:44 5K best form just yet at this point of the season. The next two fastest 5K PR's in the field belong to Ani Veltcheva of Gainesville at 17:46 and Reilly Barber of St. Augustine at 18:02. Veltcheva ran that PR time nearly 3 years ago as a runner-up in the FHSAA 3A State XC Finals, while Barber ran her near sub 18-minute performance last year in September in a victory at the Katie Caples Invitational.

Veltcheva was an age group star as a youth and past FLYRA middle school state champion, who now enters her senior year of high school trying to measure success without comparing to her success as a middle schooler or freshman. Barber was on a tear at the start of the 2020 cross country season with several major victories and running consistently in the 18 minutes. She, unfortunately, had her worst race and slowest time of the season at the state meet in 3A (18th, 19:23), which she hopes to reverse that result this fall saving her best race for last. Beyond the FL #7 ranked Schulz, the girls field includes a handful of runners who broke into our preseason top 25 statewide rankings for individual or just missed the cut including the likes of #11 Jillian Candelino of Bolles, #22 Lauren Jones of Oak Hall, and #23 Ella Mickler of Bolles. Candelino and Micker's teammate Maddie Popp drew strong consideration for a top 25 placement as well as Kate Drummond of Buchholz, Laci Watford of University Christian, and Barber all in the field at Cecil Field Summer Classic.

The door is certainly open and a lot of unknown coming into Friday that the girls' individual winner could be among a list of names approaching 10 deep. It is easy to see why the Bolles girls are considered the best team in Florida currently and team favorites for Friday at Cecil Field with several individuals among the top contenders in the race. The reigning 2A state champs return 7 girls who have gone under 20 minutes for 5K including 4 runners who have ventured into the 18-minute range between Popp (18:15), Candelino (18:19), Mickler (18:22), and Elizabeth Csikai (18:22).

Bolles could even treat the race as a tempo run (which is possible) or hold out some runners and still score a decisive team victory against a quality field of worthy ranked squads with their incredible depth and talent found on their roster.

Top teams chasing after Bolles in the field will include three more squads ranked among the top 10 in the state of Florida between FL #7 ranked Timber Creek, #9 Mandarin, and #10 Satellite. Both Timber Creek and Mandarin are squads who finished high in the final state meet team standings for 4A last fall, while returning a good core of their varsity runners looking to leapfrog some of the teams who took more graduation losses ahead of them.

Timber Creek opened their season last weekend in a team win at the Mike Gibson Summertime Run. They had to deal with some adversity and showed great resiliency as their #4 thru #6 returnees either did not race or did not finish the race between 20 minute 5K runners Hannah Kacer, Keelynn Barrier, and Carly Holadia. In order to keep their top 5 spread down and be competitive at Cecil Field, Timber Creek will need at least one if not all three of those runners back in action on Friday.

Mandarin is a team that will certainly thrive and count on their time spread to be tight as possible to match up against other squads with proven front runners. Just over a 90-second spread roughly exists between their #1 returnee Alyssa Wyatt at a 19:35 PR to their #5 returnee Keagan Miller at 21:08, which is better than most top contending squads in 4A currently.

Do not sleep on the Satellite girls as would not be surprised if they edge out both Timber Creek, Mandarin, and the rest of the field at Cecil Field to grab runner-up honors behind Bolles. That is the season-ending goal for them as well to finish second in the 2A state race behind the odds on heavy favorite Bolles. Satellite won the team competition two weekends ago at the Wickham Park Jamboree ahead of FL #15 ranked Viera with a young squad that saw steady improvements from their runners over the track season. 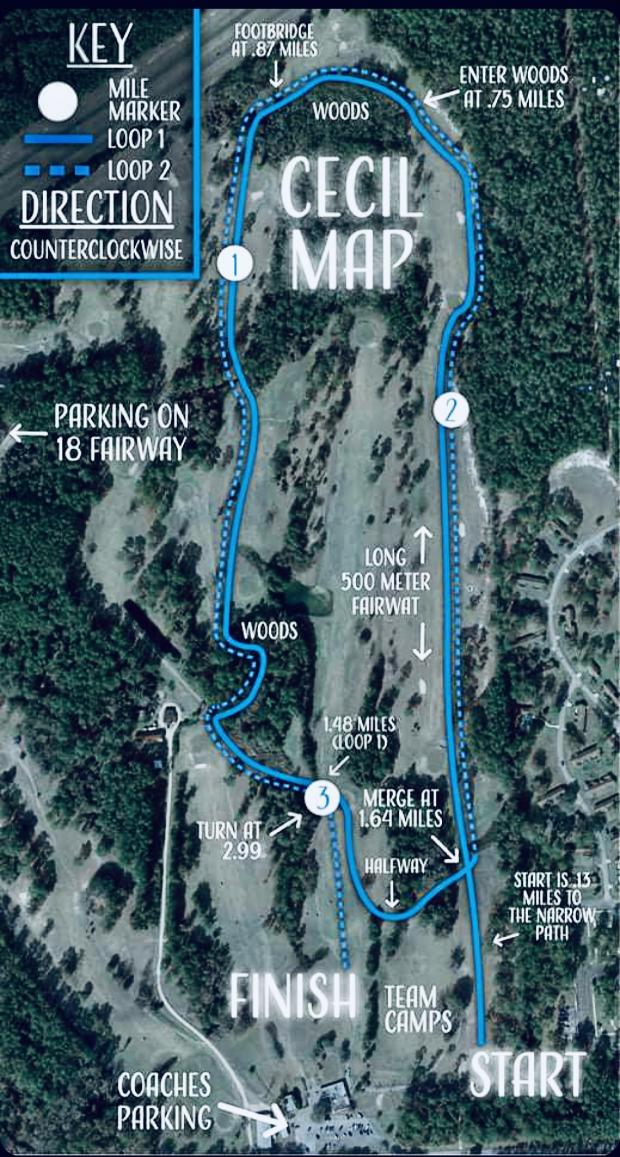