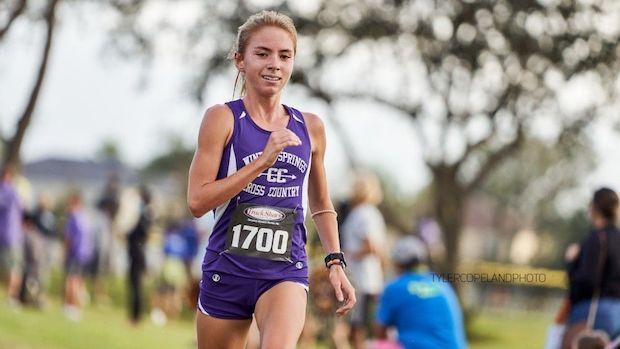 flrunners.com announces our Award winners for the 2021 All-flrunners.com Cross Country team including runner and coaches of the year. We had our fan votes last month for many of these categories, but now we make our own final subjective call on the award winners of the most deserving from this past fall season.

Undefeated throughout his entire cross country season and winning a third straight 4A state cross country title, Nease senior Rheinhardt Harrison also ran Florida high school's fastest 5K cross country time ever in 14:45 at the New World Fall Spectacular before 4A state runner-up Michael Toppi of Viera later bested that time at the RunningLane Championships. He bested both Toppi and 3A state champion Patrick Koon, who both qualified later for the Eastbay Cross Nationals in San Diego to represent the state of Florida in the New World Fall Spectacular race.

While we did not get a chance to witness what Harrison could do against the rest of the nation's best in post-season opportunities bypassed at either Eastbay Nationals or RunningLane Championships to prep for the track season and goals, Harrison did enough during the regular season despite never once racing in spikes to show himself as the clearcut best cross country runner in the state. Harrison scored major wins at the Katie Caples Invitational, New World Fall Spectacular, and FHSAA 4A State Finals.

One of his more epic race performance may have come in a monsoon rain at his district meet in the 4A District 1 race at Cecil Field and able to still motor away in the conditions late in the race with a 15:34 performance despite the course conditions and no spikes once again.

Caroline Wells completed a historic final high school cross country season at Winter Springs High School. She became Florida's fastest ever high school cross country 5K performer with her 16:40 clocking at the Hagerty Invitational to go along with her already 5K state record on the track from a 16:16 run at Hayward Field in Eugene, Oregon last summer at The Outdoor Nationals.

She set then broke her own state meet course record at Apalachee Regional Park as the only runner to ever break 17 minutes on the course winning her second straight 3A state cross country title with a 16:56 scorching run in Tallahassee.

Wells was undefeated against in-state competition and finally qualified for her first Eastbay Cross Nationals (formerly Foot Locker) with a fifth place finish at the South Regional qualifier in Charlotte. When she traveled out to San Diego for the national race, Wells found herself racing as high as top 5 by the midway point of the race before ultimately finishing 10th for All-American honors (17:38), which was the fourth fastest time ever run by any Florida girl at the national race hosted at Balboa Park.

Few coaches in the state had to navigate a complicated and high pressure situation like Samantha Gerrits while only in year one at the helm as the head coach of the Viera cross country after the former head coach resigned during the spring track season. She had taken over a program with a boys team, who had only missed out on a state title by mere single digits the prior fall and returned virtually everyone.

While it might seem that she was handed a team already set for success, there was way more going on beyond the scenes given the former coach's exit that made it a tough job for any veteran coach to be the glue to keep it all together and get the team to buy in like she did en route to the team's first state title ever this fall in a nail bitter sixth runner tiebreaker over Creekside in the 4A race. Over the course of the season, Viera had several notable victories including a head to head win against the storied Belen Jesuit program as they were willing to travel down to South Florida to face them in their backyard at the Spanish River Invite.

She also worked with Michael Toppi to become a sub 15 minute runner this fall, qualify for the Eastbay Nationals, and run the state's fastest all-time 5K performance at 14:41 in the RunningLane Champs. Meanwhile, Jack Girard was one of the state's fastest freshmen at 16:29 and Cameron Raney as a junior also developed into an individual runner to watch next fall as a consistent sub 16 performer.

It is tough getting a team to perform well at the state meet with virtually no state meet experience. Usually have to use the meet as an experience to build for future experience. How about taking a team of runners who all failed to qualify for the state meet the year prior either as a team or individually and getting them to believe that they can win the whole thing?

Or even a greater challenge having run so well over the course of the season and races building into the biggest meet of the year that they are expected to win as the pre-race favorites? Mike Maren at Buchholz was able to calmly guide the squad with that added pressure despite the lack of state meet appearance to win the 4A state title against a seasoned Newsome squad that has put together a streak of state meet podium appearances together over recent years. It was only the second state title ever in the program's history with the first win coming when Coach Maren was only an assistant coach in 2005.

Another masterful job was done by Coach Maren in keeping the team healthy for championship season despite not having a great amount of depth as their sixth and seventh runners were over 21 minutes, but had four runners with season best 5K times of 19:23 or faster led by junior Kate Drummond (18:35 season best) who emerged as one of the best individual stars in the 4A classification. They had no room for injuries to be successful and champions as they ended up becoming. The Belen Jesuit boys won the program's record extending 13th all-time state cross country team title this fall in the 2A classification while their season best times totals up to the fastest team average at 15:30. The squad at full strength was not truly scene with top runner Adam Magoulas suffering a mid season injury that forced him to sit out a good chunk of the season before returning to help at the state meet on a cross training schedule.

The team that was fairly young and inexperienced without Magoulas showed great resiliency and depth to overcome the injury by Magoulas to win the FSU Pre-State Invitational without him and had a remarkable total of 16 runners break 17 minutes on the season.  Their state championship this fall was their fifth straight dating back to 2017, which ties the all-time record.

With only a few seniors among their group of 16 sub 17 minute performers, the Belen Jesuit train of state championships does not appear to be stopping or slowing down any time soon under direction of long-time coach Frankie Ruiz. The Cambridge Christian girls won their school's first state title and in dominant fashion as the clear fastest team on the day among all classifications at the state meet coming out 34 points ahead and 19 seconds faster in the state meet results merge over 2A state champions Bolles.

Their only losses on the season came against out-of-state competition in a narrow runner-up finish at Great American in North Carolina and a 15th place finish against the country's top ranked programs in the Garmin RunningLane National Championships in Alabma while posting the fastest team average in state history at 18:06 led by seniors Mary Ellen Eudaly (16:56) and Caroline Lehman (17:03).

Other signature team wins on the season included the North Port Invitational and FSU Pre-State Invitational, while possessing one of the strongest top four lineups ever in the state between Eudaly, Lehman, 8th grader Eliana Back, and sophomore Madeleine Gear capable of running in the 18 minute range of faster. Madelyn Spadaro and Micah Friedman ultimately stepped up and alternated in the fifth runenr position and broke 20 minutes for the 5K to complete their historically dominant squad.

Runners of the Year by Grade 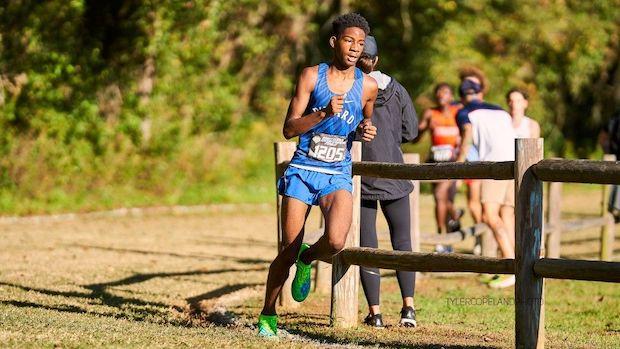 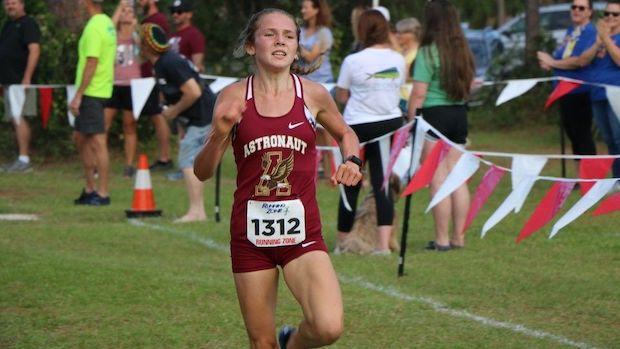 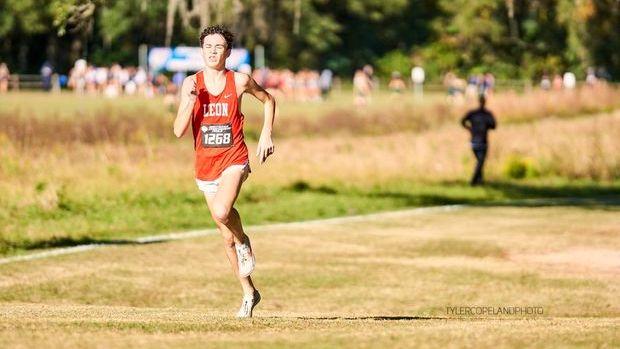 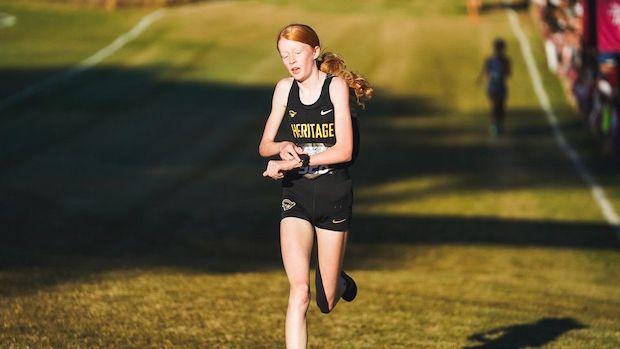 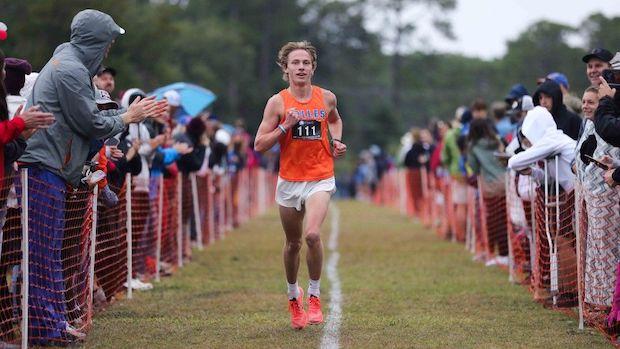 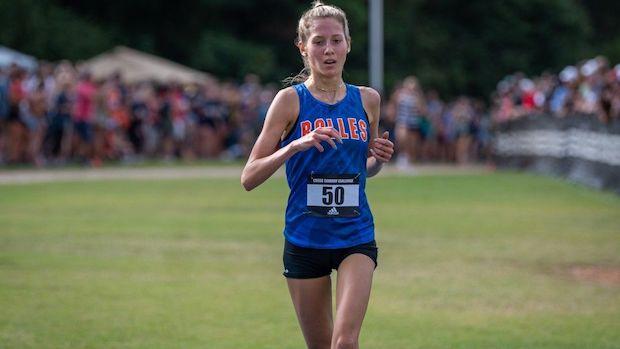 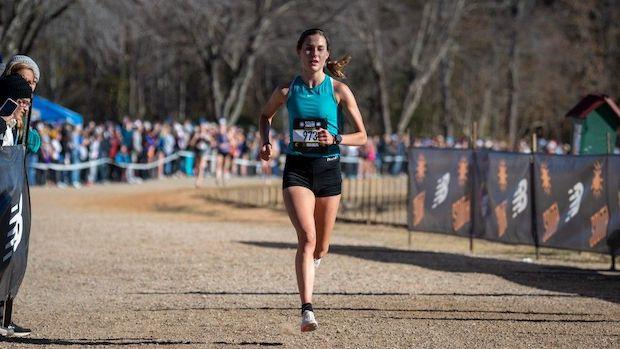