Montverde Academy senior Riley Novack has probably raced at Holloway Park more times than anyone else in the history of the course. He's been racing at the cross country venue located in Lakeland, Florida since 2014 when he was a fourth grader. He is approaching a number of 20 total meets raced at Holloway Park.

He was FLYRA middle school state runner-up on the 3K course as an 8th grader in 2018 while at Tavares Middle School and joined a short list of runners to break 16 minutes on the traditional 5K course with a 15:55 performance in the 2021 flrunners.com Invitational as a high school junior. 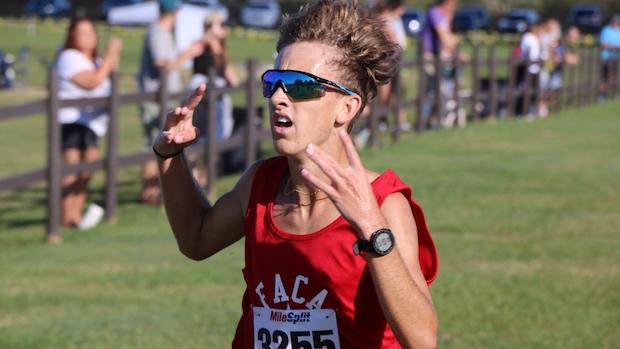 On Saturday at the FACA All-Star Senior Classic, Novack laced up the spikes one last time at the familiar venue but a totally different course in a two loop spectator friendly and potentially faster designed 5K course. Tough to tell how fast the newly designed course runs since both times used have experienced humid conditions. Novack though was not affected by the temperatures and humidity rising for the 9 am race start time as he took the lead from the gun and held it from start to finish to establish a new course record with his winning time of 15:54.

Another All-State runner from the 2A classification in Colton Lawson of The King's Academy finished 8 seconds back from Novack with a time of 16:02, but was never able to fully get in contact to press Novack in the race.

Novack, still an unsigned senior, is hoping his strong finish to the cross country season including his FACA All-Star meet victory and running a season best 5K time of 15:31 for third place in the 2A race, will draw him more interest from potential Division 1 college coaches.

He will also be racing in the 3200 meter run on the track next weekend at the flrunners.com PR Festival on the Track at Viera High School and best his current 9:19 personal best. Novack also led the West Region boys to the team victory as they ran away from the other region squads tallying 24 points. Behind race champion Novack, the West Region had North Port's Evan Crane (3rd, 16:26), Fort Myers' Timmy Schultz (5th, 16:52), Southwest Florida Christian's Hayden Tank (7th, 16:58), and Tampa Bay HEAT's Barrett Poe (8th, 16:59) all under 17 minutes for their top 5 scorers and finishing well inside the top 10 places in a field of 30 total finishers. Four of their top five runners were All-State finishers individually one week ago in Tallahassee. The West Region squad was coached by Fort Myers High School's Yancey Palmer, who just led his program to back to back 3A state runner-up team titles. The South Region had one of their best team finishers in recent memory with a score of 62 points putting them just ahead of the East Region squad with 65 points. After race runner-up Lawson, the South Region had a pack of 5 runners finish among a 15 second range from 17:24 to 17:39 among the top 20 places. Both boys squads were coached by female state champion cross country coaches in Trish Butler at St. Thomas Aquinas (South Region) and Samantha Gerrits at Viera (East Region). The East Region was led by Lake Region's Israel Mirtil as their top finisher as his inspirational story overcoming autism continues to grow as he had a great finishing kick to move up to sixth place with a time of 16:57. Gavin Nelson of Mandarin was the top performer for the North Region as the 4A individual state qualifier ended up breaking into the top 5 at the FACA All-Star Meet with a time of 16:37 for fourth place.