There were a lot of great performances on Friday evening at Bolles School in Jacksonville, including 37 national elite and 141 state elite performances, especially on the distance side of things. However, the brightest of them all was towards the end of the night with up-and-comer Sukhi Khosla. The sophomore from Leon blasted a new personal best with a big personal best of 9:16.73.

The time came against some strong competition including 2A XC state runner-up, David Yarborough of Bishop Kenny (9:34), Noah Kemp of St. Augustine (9:35), the Trinity Prep duo of Daniel Salas and Sam Milson (9:47), and a host of others. Despite the loaded field--which ended up seeing no less than 18 go under the ten-minute mark (!!)--Khosla gained separation early and never really looked back. It certainly makes you wonder what he will be capable of later in the season at a meet like FSU Relays with some national level competition who should be pushing for the nine-minute mark. 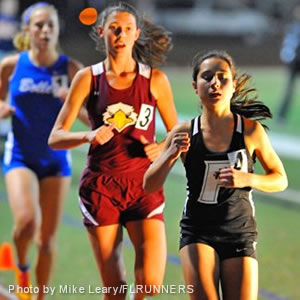 The girls 3200 battle was no slouch either, with 15 girls dipping under 12-minutes. Eden Meyer of Providence kept ahead of strong pushes from Mackenzie Wilson of Bolles and Brittney Olinger of Oak Hall. The duo kept kept the pace honest, as Meyer could hear footsteps much of the race as they traded off the runner-up position. The Providence junior took leadership early and never let it go, leading to a 11:18.41 victory with Wilson and Olinger in 11:22 and 11:23.

Earlier in the day, Meyer also helped anchor her 4x800 relay team to a fifth in the state 9:38.85. That Providence four-some also included Danielle Dunn, Camille Jackson and Katherine Messer.

The boys 4x800 saw a new state leader emerge with Ridgeview taking it by four seconds over Robert E. Lee with an 8:09.01. It's impressive for Ridgeview's team made up of four seniors who are eager to go out on a high note. They improved by ten seconds over last week's performance and are already knocking on the door of the 8:08 at last year's state meet that earned them tenth. They'll look be in the hunt for a podium spot come May.

Samantha Cook, the senior from Bradford, equaled her personal best from last week at the UNF Spring Break Open, to tie (herself) for fifth in the state in that event. Hey it takes skill to be that consistent down to the inch! The toss went a very respectable 41-feet and five inches.

Larry Donald of Bartram Trail looked mighty impressive in the hurdles. He swept both the highs and the intermediates. His 14.47 at the 110s is easily a new personal best and the 38.67 victory in the 300 hurdles is just off his season best from last year at districts. Depending on the rest of the results from the weekend, he could find himself top three in the state in both or at least top five. 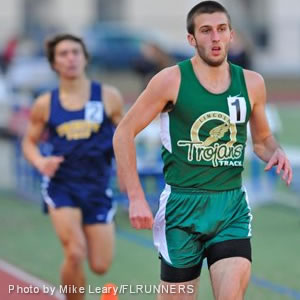 Trevor Touchton was another guy with an impressive double on the night. He is not one of the super well-known names in the Florida distance scene, but I suppose he is trying to change that in his senior year! He went a long way toward making that happen on Friday with wins in both the 1600 and 800. With seven under 4:30 the 1600 was another stacked distance field in a night of great distance races!  Daniel Salas of Trinity Prep led the race early on, but Touchton stayed patient and waited for his chance. He took the lead and pulled away to best Salas (4:24) and Noah Kemp of St. Augustine (4:25) for the very nice season best of 4:20.42. But he wasn't done!  He came back for another fight in the 800 meters. This time it was fellow Tallahasseean (Tallahasseeite?) Will Spiers of Chiles who pushed Touchton to a new state leading outdoor time of 1:55.58.

The Lincoln senior did post some solid times early last track season including a 4:20.32 at Bob Hayes and a 4:21.76 at the FSU Relays. After that point he went down with an injury that knocked him out of the post-season. He returned in the fall after injury-impacted training in the summer, and afterh a slow start to cross country he pinnacled with a 16:47 at the FSU Invitational. So it's very impressive to see him come back out with a vengence and that kind of double here. He'll definitely be on the radar now and should be a threat at the state meet.