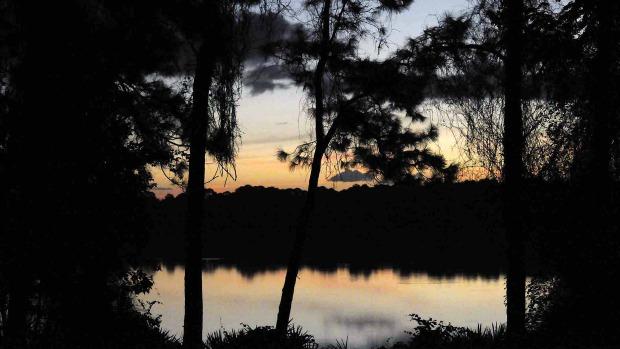 When things get serious, the serious get things done, and certainly that was the case with this race. With one eye on the competition, and the other on advancement, each athlete, and each team in turn, had a goal to extend their season at least one more week. Fortunately for one team in each race--Boys and Girls--a rule change (FHSAA 4.5.2.2.4 - NFHS 9-5-1) gave an additional team that breath of life. Much to the credit of the many coaches who successfully lobbied for the change, this was the first year that the rule took effect.

Under "District to Regional Meet," what once was advancement based upon full teams finishing the race was--in 2015--changed to the number entered into the race:

* In a district with six (6) or less teams entered, the first three (3) placing teams and the top 15 (15) runners will advance to the region meet.

* In a district with seven (7) to nine (9) teams entered, the first four (4) placing teams and the top fifteen (15) runners will advance to the region meet.

* In a district with ten (10) or more teams entered, the first five (5) placing teams and top fifteen (15) runners will advance.

As I write these words, I am sure athletes and coaches throughout Florida are poring over the flrunners.com website, studying the results from other district races and preparing themselves mentally--as they have physically since last summer--for the honor of competing in the state championship race. Credit flrunners.com for making that possible information so readily available. 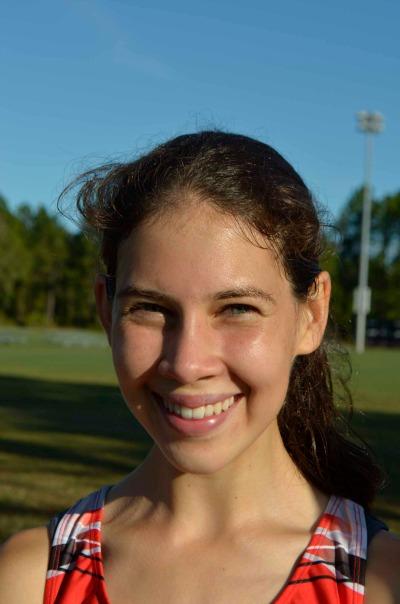 Watching Daniela Urzua run this race was an experience that words can hardly describe. Those 18 minutes and thirteen seconds called to mind a movie, "Endurance," which follows Haile Gebreselassie on a training run through his native Ethiopia. A trailer can be seen on YouTube. And if you think you might enjoy more of the music of Clint Masell & Kronos Quartet, try Ghosts of Things to Come.

Taking command of the race from its start, each of Daniela's subsequent steps added a few more inches to her lead. By two miles, she was ahead by 35 seconds, and nearly doubled that by 3.1. Somewhere en route to her first district championship, we witnessed the ascension of a star.

"The plan, basically, was to run strong," Daniela said afterwards. "We knew we--our team--had a chance to make it out of districts, so my coach's idea was to just run hard."

This was Urzua's fifth first this year. She started her season with an 18:44 win at the August 22nd Mike Gibson Summertime Run, and proceeded to run faster with each race: 18:41 at Spikes and Spurs; 18:21 at Mountain Dew; 18:02 at FSU; 17:56 at the SAC Championship. Although her 18:13 here seems to have been the lone exception to a steady stream of diminishing times, considering her wide margin of victory--65 seconds--it instead hints at being the year's best effort thus far. She ran alone the entire race.

"I wanted to keep getting faster throughout the race," the junior continued. "It all depends. When you run against competition, they might push you more than you can yourself. Then, it changes from focusing on 'feeling good' to 'looking good'...looking up and not letting anyone out of your sight."

In the grand scheme of things--running that time on this accurately measured, time-tested course at Sperling Sports Complex, with its many twists and turns--was a huge effort.

Daniela finished with a compliment: "I want to congratulate all the other girls who ran a good race." 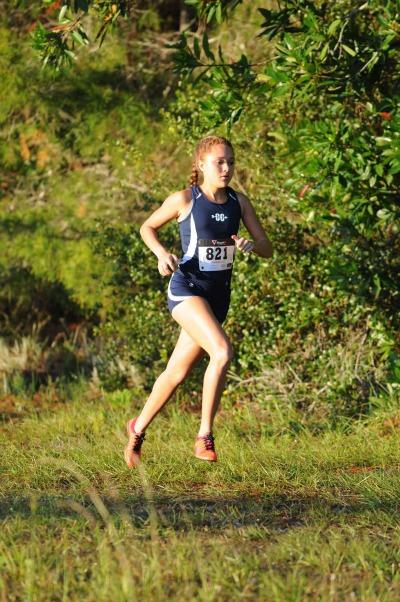 "This season has been different for me," she told me. "I was hurt early-on with an IT band injury (ITBS). So I got off to a late start and wasn't hitting the times I wanted during the season.

"Earlier this year I doubted myself because of my injuries. Last week, at the conferences"--where she ran 19:33, her first sub-20 this year--"I had a breakthrough. So today I didn't give up. I kept fighting. My teammates were doing everything they could to win, so I did everything I could to help them do that.

"Next week will be a little bit harder, so with us going into the regional thinking it might be our last race--as well as for me, being I'm a senior--(I intend to) just give everything I can and leave all of myself on the course."

But will this season really be the end of the road?

"Next year I will be running both track and cross country at Oklahoma State University. I will be majoring in Economics. I am very excited. It will be a huge change for me: being away from my family, and the difference in climate. It will be challenging, but I know I'm going into a great program. I'm happy with my decision because of the (enthusiasm of the) coach, Dave Smith, and I think I'll feel right at home." 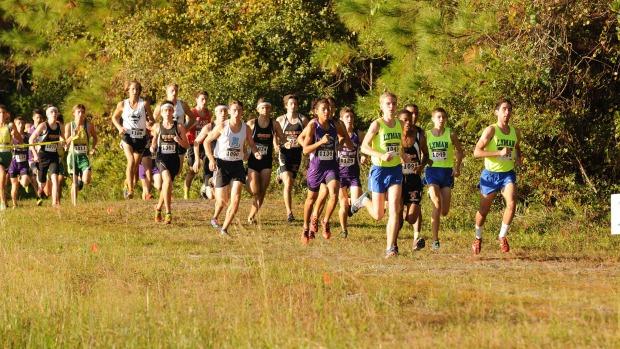 They are the deja vu duo: seniors Joshua Jacques and Jordan Armstrong. They train together, race together, win together, even finish each other's sentences.

In each of Jacques' seven first place finishes over the last few years, Jordan, his training partner, has never been far behind. For that matter, since entering ninth grade together in 2012, they have NEVER been far apart in a cross country race, period.

Their combined performances have made the Lyman Greyhounds just what their mascot's name implies, and that rabbit rarely gets away. Since their freshman year, between them, they have contributed to no less than ten team championships (four SAC, four District 2, one Region 1, and one State 4A), plus four invitational titles. Jacques, alone, has one state, one regional, two district, and four SAC XC titles. 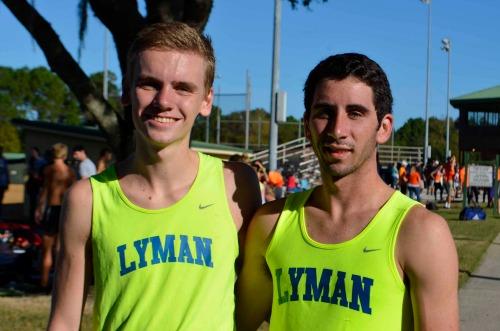 As they finish up their last high school championship series, one has to wonder, what will they do next? We saw a small measure of their magic at this meet. In the closing moments of the race, Josh started to slip away from his wing man, as seen in the Islandwide photo gallery. However, when they crossed the finish line, their times were an identical 15:56. Even poor Todd Grasley was confused, and for a few hours, he had Armstrong winning. So what actually happened?

Josh first looks at me, then Jordan. Jordan takes over.

Jordan: "It's kind of a hand signal that has been passed down. He put his hand behind his back and signaled for me to catch up."

Josh: "We all (the team) planned to stay together and help Bryce (Bell, a sophomore, fourth in 16:30) to stay with us as long as he could."

Jordan: "That was the plan; to take Bryce through 1 1/2 or 2 miles, and then take care of business. I set the pace in the beginning, got us into a groove, then Josh took over. It was all Josh after that...good old Josh."

The question that comes to mind is "What happens in a big race, where the competition up front is so thick that the team members become separated?"

Josh: "We've got some colorful shirts, so we try to find each other."

Jordan: "We make sure we find each other."

And in the State Meet, when it is for all the marbles?

Josh: "In a bigger race, when you are all alone, and not running together--toward the states--there we have other people we can run with."

Jordan: "Basically, it's the same game plan. Get out together and try to stay with Josh as long as possible, while he focuses on the other elite runners in the race--we focus on him. Next week (at Regionals) we have Justin Pacifico from FPC, and the two Freedom guys, Tim Doyle and Johns Volmar. In States, we have Adam Bradtmueller (Sarasota) and Carlin Berryhill (Coral Reef). Those are the two big guns."

Josh: "My goal at the State Meet is to perform to the best of my ability, and hope for our team to win the meet."

Not far behind the two front runners, but just beyond striking distance, was Hagerty senior Andrew Stivers.

"With Josh and Jordan in my district, and seeing them most of the time, I've gotten used to them," he commented during a phone interview. "I generally go out slow in the first mile, and see what kind of pace I can maintain for the rest of the race. I hold back, just a little, and then pick it up to see where I can fit in."

And that is just how the race unfolded for Stivers.

"After being in seventh at the start of the first mile, I moved into fifth or fourth. Bryce (Bell, from Lyman) was ahead at that point. That was also the point where I felt if I wanted to pass Jan (Figueroa, Lake Howell), and bridge the gap with Josh and Jordan, that's where I had to make my move. 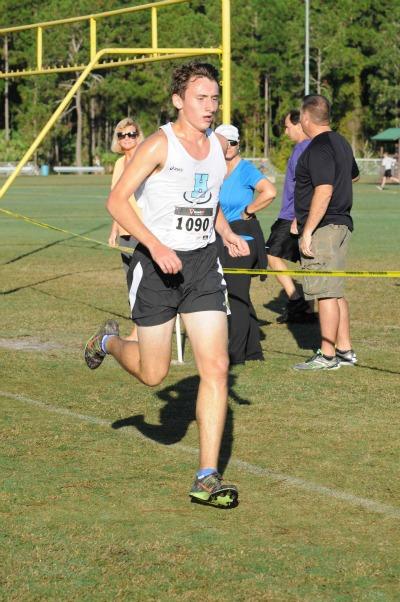 "Just after the mile, mile and a half, while I was moving up, my coach (Jay Getty) shouted out 'Hold on and get every point you can, we're going to need it!' Looking back, I think it was his way of getting me to maintain my focus."

In reality, Getty's message was probably two-fold; (1) Stivers was looking much stronger than either Bryce Bell or Jan (Concepcion) Figueroa, and (2) Getty no doubt saw the rest of his team's season riding on Stivers' final finish place.

"Prior to this meet, we thought there were going to be four teams advancing. It was only the day before the meet that our coach told us it would be five.

"We have a freshman--Adam Mastrobuono--and a sophomore--Garrett O'Malley--in the top five. The week before, the two juniors (Caleb Ramirez and Caleb Getty) and I went over the dynamics of the race with them, so they had the essentials of it and knew what to do in a championship level series."

In the second half of the race, Stivers passed Lyman's Bell, then Lake Howell's Figueroa, thus moving up to third, where he finished (16:22). His team place fourth, and suddenly it was time to think ahead a week.

"We think the regional is the most important race of the year, especially given that we are in Florida's Region 1. It's definitely going to be a hectic week (beforehand). If you don't make it through the region, your season is over.

"Given the intensity of the race, and knowing we're one of the better regions in the state, I feel a lot of us are going to PR, even allowing for any difficulty of the course. And I'm definitely thinking it is going to be a close finish among the top 15 or 20. I want to PR, and be close to the front of that group. I also want to bring my team along with me."