It is an annual tradition for the Jaszczak twins Paige and Riley of Titusville to start every cross country season racing in the Wickham Park Jamboree together. It all started in 2018 when the pair as freshmen both finished in the top 10 in the pre-season opener race at Wickham Park in Melbourne, Florida.

As sophomores, Riley finished as the race runner-up. Last year as juniors, Paige won the race overall. This year as seniors, one of the twins would be missing in action as unfortunately Riley came down with illness earlier in the week and was not recovered enough to race on Saturday. 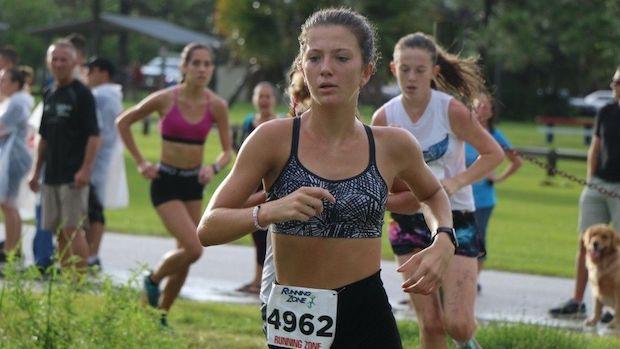 So that left the lone twin in Paige Jasczzak to hold down the fort in Riley's absence, which she did after pulling away from a handful of challengers after the first loop to win by a 24-second margin of victory in a time of 20 minutes flat.

Not a PR day for many runners with the course enduring rain throughout the week and then a downpour during the boys' race left Jaszczak and the rest of the girls' field trying to navigate thru the puddles and chewed up the pathway to run on following the boys doing two loops around.

Despite an opportunity to individually shine alone, Paige made sure when interviewed post-race to rope her twin sister Riley over to join her as they both looked ahead to their final season of high school cross country. Both twins are looking to break 19 minutes for 5K this season and be the best individual runners from the Cape Coast Conference. The two sisters pushed each other to run 5:17 together in the 1600 this spring at the state meet and hopeful both to earn All-State honors in 2A this fall. Two youngsters were pressing Paige on the first loop at Wickham Park between a freshman and seventh grader for the Central Florida Flyers club in Lailana Decker and Claire Reburn. Not sure which high school that Decker is feeding into coming from Neptune Middle School in Saint Cloud, while Reburn is currently at Foundation Academy in Winter Garden.

Decker just finished her track season competing at the AAU Junior Olympic Games in Houston, Texas in which she ran a PR's of 4:59 to finish 14th for her age group in the 1500 meter run as well as 10:54 to finish 8th in the 3000-meter run.

Reburn also ran in AAU track meets over the summer, while also competed in the high school season at Foundation Academy posting best times of 5:34 in the 1600 meter run and 11:53 for the 3200-meter run.

At Wickham Park, Decker took the runner-up honors in a 20:24 performance while Reburn was 8 seconds behind in third place at 20:32.

Cancro, only a freshman led the FL #10 ranked Satellite girls with 30 points to a team victory ahead of FL #15 ranked Viera with 56 points among 9 teams scored. While Bolles girls look to be heavy favorites to repeat in 2A, the Satellite girls appear to be in great position to try and seize that state runner-up spot this fall behind them in the classification.