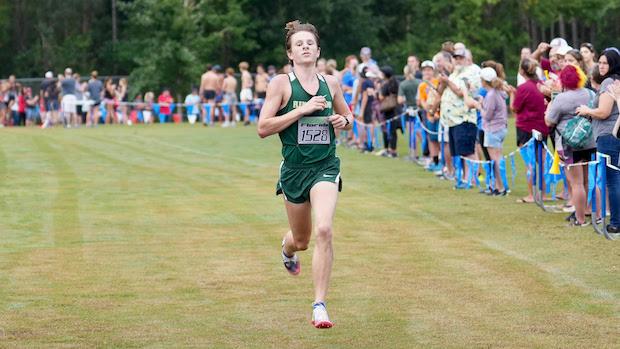 The FL #2 ranked and 4A favorites Creekside won on Saturday at Bartram Trail High School for the Bale-N-Trail, but not before having to sweat it out thanks to a Fleming Island squad that is looking stronger each week. Only 5 points separated the two teams with Creekside tallying 45 points compared to 50 points by the FL #11 ranked Fleming Island boys.

However, Fleming Island got out well on Creekside with two finishers ahead of their first including race champion Graham Myers just missing out on his third sub 16 performance of the season with a winning time of 16:03. Teammate John Keester IV, who was the team's top returnee before Myers transferred in from St. John's Country Day, had his best race of the season in fourth place at 16:21.

Fleming Island had two others among the top 15 in Danny Sakowski (11th, 16:58) and Jacob Campbell (14th, 17:16), while Andrew Boyer (21st, 17:31) rounded out their scoring. Fleming Island, now ranked #2 in the 3A classification, only solidified their team's position and arguably deserves a bump up in the all-classification rankings finishing so close to Creekside, the #2 ranked in the state, at Bale-N-Trail.

Creekside still appears to be the best team in 4A and if can get their top returnee but #6 runner currently Mac Williams running closer to last year's form as he had a best of just over 16 minutes best, they will be even that much tougher to beat. Another big development out of the boys race at Bartram Trail was the 2A boys 1600 and 3200 meter state champion Aidan Ryan working himself back into shape after a summer injury to finish 5th place with a season best time of 16:27. At this rate of improvement on a weekly basis, Ryan could be very well close to his state championship form in a month from now. Bolles sat out majority of their varsity boys this weekend from racing. Speaking of Bolles, the girls race at Bale-N-Trail was dominated by them as they did run their top varsity runners led by Jillian Candelino who let it rip with her fastest time of the season and improving by over a full minute from last year's winning race at Bartram Trail with a stellar 17:45 effort. In the process, she broke the old meet record of 17:54 previously held by Chiles great and a Foot Locker finalist in Lily Williams from the 2010 race. Candelino had won last year's Bale-N-Trail in more adverse conditions with a time of 18:56 before ultimately running a 17:36 season best at FSU Pre-State Invitational as well as winning her first individual state title in 2A.

As a team, the defending 2A state champions and FL #1 ranked Bolles girls ended up placing their top 7 all among the top 16 places as behind Candelino got another exceptional race from their #2 runner Ella Mickler as the race runner-up in 18:26, which was two seconds faster than her performance at Cecil Field and only 4 seconds off her personal best as a sophomore in 2020. Rounding out their top 5 scoring to produce a dual meet like score of 28 points were Elizabeth Csikai (5th, 19:19), Estella Bruneau (8th, 20:39), and Elizabeth McClure (12th, 20:50). A very positive sign for the Bolles girls is the improvement of sophomore McClure, who was the team's #2 runner one year ago as a sub 19 minute performer but was coming back this season working back into fitness from injury. A last half season push and time drops from her will make them even more formidable.

Bolles also has a sixth grader waiting in the wings in Sofia Stam who has been winning JV races left and right this season including a 20:25 victory at Bale-N-Trail as she ran away from the field by over a minute margin of victory.

The defending 3A state champions and FL #3 ranked Ponte Vedra girls sat out their top runner Lindy White, but still managed to earn a runner-up team finish on Saturday with 60 points. The FL #14 ranked Creekside girls were not far behind them in third place with 82 points and were led by their star freshman Alyson Johnson in third place with a time of 19:15.

There were potentially 3 podium squads in the race with Bolles and Ponte Vedra girls favored to repeat as state champions, while Creekside ranked #3 in 4A is definitely in contention to grab one of the two podium spots come November in Tallahassee.