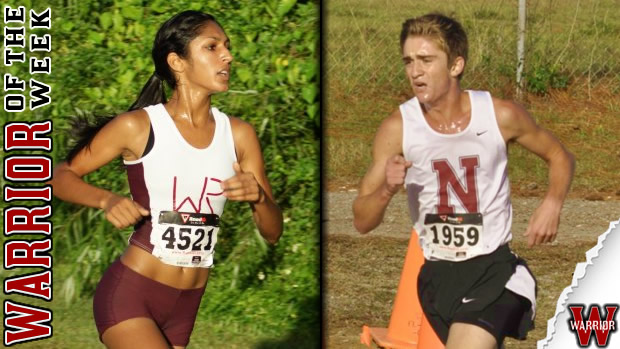 Nikita Shah might not be the tallest runner on the cross country course, but what she lacks in size, she makes up for in strength and toughness. The Wiregrass Ranch senior has been nothing short of outstanding this season staying consistently in the mid 18's for most of the season. At the flrunners.com Race of Champions, she ran a new personal best time of 17:48.50. Throughout the postseason, Shah has cruised to easy wins at the conference, district, and regional levels. Coach Don Howard says the plan for Shah has been to run out front in those races and do enough to win, but save some energy in the tank for the state meet.

"She has won the SAC Conference title, 3A 6 District title, and 3A-2 Region title while holding something back. Last year she battled Anne Marie Blaney at Districts and Regional meet, and was the only girl to run under 18 minutes all three post-season races. This year she's been able to hold back and we think she's ready to run a great race Saturday."

Shah who finished fourth at the state meet last year and opened up some eyes, looks to be one of the favorites this weekend in Tallahassee. Coach Howard didn't want to give too much of their game plan away, but says the senior standout plans to stick with the top four or five girls and make her move early. They don't want it to come down to a sprint between Emily Edwards, Kacy Smith, and Shah.

"We want to make a move before they get to the final stretch. She is worried about being outkicked."

No matter how the race plays out Shah's accolades and career for Wiregrass Ranch speaks volumes. Recently, the senior committed to Harvard University which not only showcases her strong athletic skills, but her academic prowess as well. Howard has coached several D1 and D2 runners over his career and says Nikita is by far the most accomplished and best runner he has coached; the complete package deal for a college program.

"Her academics are phenomenal and it was the combination of those academics and her athletic abiltiy that opened the door to Harvard. The Crimson get a girl with a lot of up side. She has run relatively low mileage for someone with her accomplishments, and we try and take care of our runners with proper training, icing, stretching, encouraging good nutrition, etc. I think they're getting someone who can still run much faster than she has already."

Thomas Howell began running as a seventh grader and quickly got used to winning. As an 8th grader he won the Middle School State Championship in the 1500 meters. Fast forward to his high school career and Howell along with fellow class of 2014 teammate Nick Morgan are making noise in northwest Florida. He placed first in the regional, but had an unfortunate serise of events at the state meet. As he hit the 400 meter mark, Howell couldn't breathe. He stopped running and pulled out of the race. It ended a season that had a ton of promise and could have landed him in the top five.

As the outdoor season rolled around, Howell continued to excel. He placed second in the 3A Outdoor Finals in a time of 9:27.49 and ran a personal best of 4:26.48 for 1600 meters at the FSU Relays. A hard summer of training, and the junior was for the cross country season. Howell placed first in four of seven races. Two of those were the prestigious flrunners.com Race of Champions where he finished seventh and Pre-State where he placed fourth.

After adding another district championship to his resume, Howell continued to excel winning the 3A Region 1 Championship in a new personal best of 15:25.31. The junior stride for stride with  teammate Nick Morken. With 1200 meters to go, he was actually behind by a step, but that didn't seem to bother him. He turned it on from that point on to demolish any runner standing in his way of an individual title. Morken was seven seconds back with sophomore Sukhi Khosla of Leon 27 seconds back in third place. It was another notch in the belt and proof that he was peaking at the right time.

If Howell wants to make a statement, their is no bigger week than this one, Saturday when the gun goes off for the 3A Cross Country Finals. 3A is arguably one of the toughest classes with twenty runners under 16:00 and four under 15:30, Howell being one of those. It's going to be a close race that can come down to the final meters. The youngster definitely has the kick to hang with the top guys and definitely will be a contender. No matter what the outcome is, one thing is for sure, however Howell finishes he still has one more year to get better, stronger, and faster so the rest of the state shouldn't just watch out Saturday, but in 2013 as well.