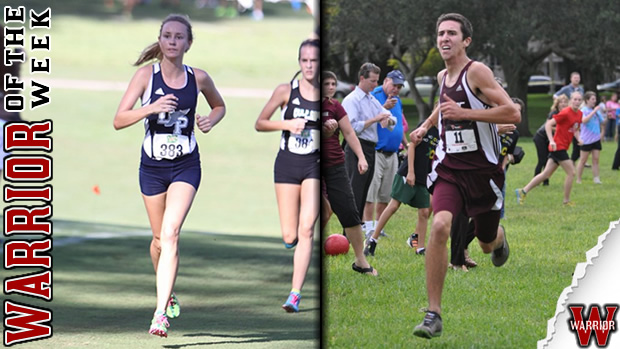 Josh Keenan may be a senior, but the Seffner Christian standout has only been running for two years. Over the past year Keenan has increased his mileage and developed a monster kick. Coach Andy Holmes describes him as a great closer. Close the door is exactly what he did to his competition at the Bay Conference Championship. Holmes says the game plan coming into the meet was to break sixteen minutes and he nearly accomplished that goal.

"I knew it would be tough, because there were a few faster runners, but not enough so that would maybe make him go out a little harder. Breaking sixteen minutes is a feat. The plan was to have him about 4:55 at the mile and then be 10:10 at the two mile. He was about 5:00 at the mile, not sure about the twp mile, but he unleashed a long kick the last few hundred yards that almost let him break sixteen."

Keenan crossed the line in 16:02.00. Holmes judges his runners performances by how they finish a race. He thought the senior ran one heck of a race for being slightly under the weather, and unchallenged after the two mile mark. Despite a new personal best, Holmes believes Keenan's best race of the year came the week prior at the county championships.

"It’s hard to pick just one, but I would go with the County Championship. He ran his smartest race there. Didn’t go out too hard. He was 7th with about a quarter of a mile to go, and was able to beat two other guys to finish fifth. That is a big meet because there are a lot of good runners in our county and basically you need to get top seven to get 1st team All-County."

Although he isn't the most fiery guy on the team Keenan sets an example.Coach Holmes describes him as a true distance runner one  that can go out at a moderate pace, and finish a race strong, capitalizing on those that go out too hard.

"He hasn’t run track yet, but I think he would be a great two miler. He is the toughest kid I have ever had the privilege of coaching. The amount of endurance the kid has is sick. He can hold a hard pace for about any length of mileage you give him."

He is also the team captain and a role model. The team has runners of all ages from fifth to twelfth grade so that older guidance is a great addition. Holmes says Keenan is like a legend to the younger group and a true pleasure to coach.

"Everyone looks up to him, and is basically in awe of him, his workouts, and his races. He talks one-on-one with our kids, gives them adviced, and encourages them. He is a once in a lifetime type runner. We have never had a runner that could match his toughness. Your number one runner is not always your best worker, but he will not be out-worked by anyone."

"Amber is a very disciplined and consistent runner."

That is how Dr. Phillip's first year coach Sheila Taylor describes senior Amber Johnson. Johnson has had a great 2012 season. She kicked off the year with a second place finish at the UF Mt. Dew Invitational  and has dipped under nineteen minutes in her last four races. Taylor noticed her strong work ethic as soon as she met Johnson and says she has maintained that level of hard work throughout the season.

"It's tough how to adjust to a brand new coach in your senior year, but Amber has  embraced the new program and mentality even though she may not have been quite certain that it was going to work. She has been instrumental in helping the team embrace the program as well. To me this is leadership." e senior outlasted teammate and two-time cross country state champion Bridget Blake, as well as, last year's 4A runner-up Emily Headley of Olympia. Taylor believes it was her best race of year and not just because she set a new personal best time of 18:32.90.

"She executed the plan very well at the Metros. She focused on coming down a bit in her first two miles and compiling several surges to finish out the wind and get the PR. It was her best race simply because of the way she ran it."

Although, it was a new personal best the two have plans to set new pr's before the season is over. Taylor says the win at Metros combined with the effort she has put forth in practice have boosted her confidence going into the postseason.

"We train to peak when it counts. As hard as she has been working there is much more to come. It's a pleasure to have an athlete like Amber Johnson who's willing to put in the work that it takes to be successful. I truly believe she will have an awesome post season as long as she continues to believe."