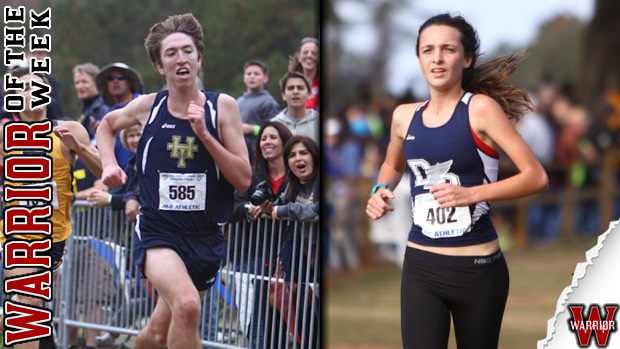 Alex Brown knows what it's like to be part of a winning tradition. The Holy Trinity senior started running for the school as a seventh grader and was a part of three team championships and three runner-up finishes for the Tigers. Brown kicked off the 2012 season with wins at the Wickham Park Jamboree and against a very competitive field at the Katie Caples Invitational. His successful season continued with a runner-up finish to Daniel Salas at the Jim Ryun Invitational. Brown and Salas would also duke it out at the 1A Cross Country Finals. Coach Doug Butler says Brown delivered in the biggest race of the year.

"The plan was to trade the lead with Tristan and make sure the pace was hard. Then at the two and a half mile mark the plan was to make a move until the hill then ease off and let Daniel push the hill. Then wait till the last 200 and kill it. He raced to perfection."

Brown crossed the line in first place with a new personal best time of 15:37.69. It was his first state championship as an individual and he told me after the race that it hadn't quite sunk in what he just accomplished. Not only did the senior win individual gold, but he led the Tigers to their third title in six years. Coach Butler says it was a goal for the team since the beginning of the summer.

"All of our guys wanted this title very badly from June. It did not come down to who wanted it most Saturday. They wanted it the past six months."

Alex Brown had a great group of seniors to share this with including third place finisher Trevor Kattenberg. Butler says the duo have been perfect for making each other better this season. He adds that the two of them will definitely be mentioned with the great group of Holy Trinity runners that have come before them.

"Alex and Tristan will leave as a couple of the top five all time runners in school history. We had not gotten the team and individual title in same year so that was huge."

The senior will have one last race with his teammates as they head to Charlotte, North Carolina this weekend for Foot Locker South. Butler says whatever happens, happens.

"We don't have any big goals., We're just going  to Foot Locker to have fun."

Bridget Blake didn't have the best start to 2012. She wanted to take her time, not over do it, and prepare for the one meet of the year that matter, November 17,2012, in Tallahassee. Blake was determined to take home individual title number three and anything else would be a disappointment. As a freshman, she finished runner-up to Shelby Hayes who is now at the University of Florida, and then won the 4A championship as a sophomore and junior.

Number three came easily. Blake led a group of about seven runners in the beginning stages of the race. She quickly separated from the pack and it became a race wtih the clock. She crossed the line in 17:53.04 which was one of her top times of the year. Blake's Dr. Phillips teammate and one of her closest friends Amber Johnson finished third. It was a great experience for Blake and one she says she always looks forward to every year

"I couldn't ask for anything more. All the injuries I've had along the way and weeks I've had to take off those have made me stronger. I wouldn't have traded the time for anything. It has all worked out in the end so I am definitely glad all the hard work has paid off."

Blake calls herself blessed to have had such a great cross country career, but its not quite over. Her next challenge will be this weekend at Foot Locker South in Charlotte, North Carolina. As a junior she finished seventh and advanced to Foot Locker Nationals in San Diego where she placed 38th competing against the top runners from around the country. She has a shot to once again crack the top ten and earn the trip out west.

After her cross country run is over, Blake will work on her college choices and prepare for the upcoming track season. The Panthers star has visited Ole Miss, Iowa, and FSU and hopes to make a decision in the coming weeks. As for track, well she has the same goals as she did this cross country season, win state titles. Blake finished as the 1600 and 3200 meter runner-up behind Shelby Hayes her freshman year and has gone onto win the events in 2011 and 2012. When her high school career has come to a close she will be one of the winningest athletes to come through the state with seven gold medals already and the possibility of numbers eight and nine this outdoor season.