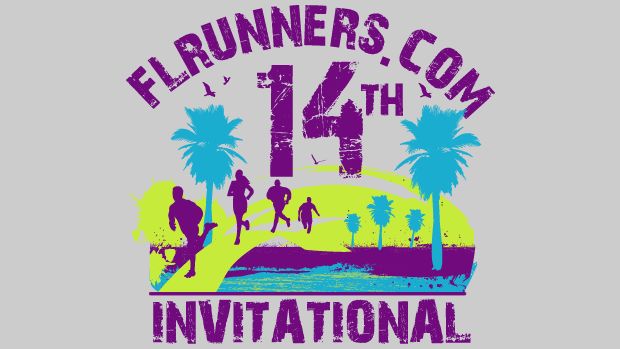 By Blake Bickerstaff, Will Malone, Todd Grasley, and Kyle Butler

The social pundits had decided their favorites in advance. Hands down, most felt, the winner was going to be either Tyler Bennett of Ft. Myers or Nick Morken of Niceville. Despite the field being extremely deep, the common wisdom was that those two guys were running a step ahead.
Going into the race Bennett stood undefeated, with major invitational wins over solid fields at UF Mountain Dew and North Port. Morken, on the other hand, had been attacking courses in the northern part of the state and was looking like he was setting himself up for a big breakthrough race.
Quietly in the shadows though lurked another undefeated athlete: Nick Diaz. The Miami Sunset junior had been racking up the championship medals in South Florida all season.
The starting gun fired by professional athlete Sara Hall cracked like a whip and Franco Martins of Winderemere Prep led the bulls out of the gate for the initial 300 meter stampede. The sharp right arm of the “horseshoe” sheared down the mass, as the athletes flew down a few feet in elevation toward the lake’s shore. About the 600 meter mark, the leaders began to emerge with Tyler Bennett taking over the pacing duties. There was an army of runners still just on Bennett’s heels with Troy Clark of Mount Dora Bible, Charlie Shackelford and Trey LaNasa of Ft. Walton Beach inching up on Bennett’s shoulder. Putting themselves in good position tightly behind included Fabian Tomas of Belen Jesuit, defending 2A state champ Alex Pedraza, and the Sarasota duo of Zack Summerall and Adam Bradtmueller. Ryan Rodriguez of Belen Jesuit and Kurt Convey of Coral Reef also kept good aggressive position.
The huge pack disappeared around the Do or Die Bend for the first time, with the race being anyone’s game. As anyone who’s watched a few elite races on this course knows, a great minute and a half of mystery exists at this point. Though a horde of runners disappear behind the trees, by the time they come back into view they’ve magically dissipated. The real race now begins.
Coming back around first was still Bennett. While some had started to slip away, Tomas, Rodriguez, Convey, Clark, Summerall, and Bradtmueller had distinguished themselves from the chasers. Joining the leaders now was Diaz.
By the mile mark (4:52) that train of eight runners--Bennett the engine and Convey the caboose--had gapped the chasers by a couple of seconds.
At the midway point, as they passed the lookout tower and entered the back bridge, Troy Clark made a surge to the front and kept the pace honest. Diaz and Bennett responded, while the others tried to hang on to the quickening pace.
After passing through the trailed section and another smaller bridge, the runners came back into view along the banks of Alligator Alley. Clark, who had been unable to maintain the torrent pace he had set for himself, settled back down into sixth place. A new set of four leaders came to the forefront with Kurt Convey and Alex Diaz now taking over pace position shoulder-to-shoulder. Nick Morken of Niceville had measured his race nicely and had since picked through the pack and moved himself all the way to fourth place just behind Tyler Bennett.
Crossing the Main Street Bridge to enter the final mile of the race, the four leaders put a 15-meter gap on the chase pack that was led by Zack Summerall, Troy Clark, and Fabian Tomas. Approximate two mile split for the leaders was 10:15.
Diaz started to roll, opening up his stride and moving to the front of the four-pack of leaders with three-quarters of a mile to go. Morken tucked in behind. Bennett, who had briefly started to fall back and lose contact, regained his composure and pushed back up. With about 800 meters to go, he took a favorable inside angle around the bend and briefly regained the lead.
Heading up the slight incline into the upper path the leads around the horseshoe to the finish, Diaz shook off his third place position and started his kick with 600 meters to go. Bennett and Morken hung shoulder-to-shoulder in second place with Convey content to draft in fourth position. Rodriguez and Summerall sat about nine seconds behind. 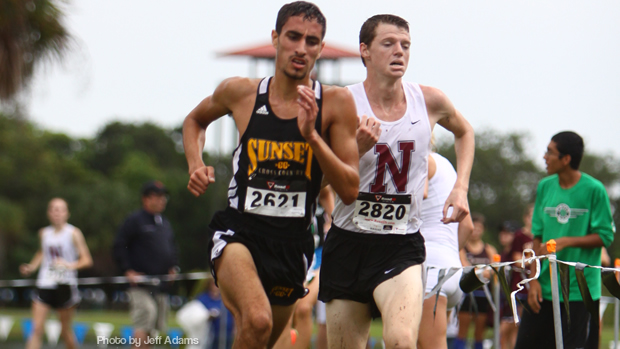 As Diaz continued his long kick, Bennett and Convey fell off, but Morken refused to let loose. The Niceville Nick dug deep as the rounded the final curve into the homestretch. He bravely took the lead and his face read pure determination, but his form read struggle. As Morken thrashed his arms in attempt to find his inner Mo Farrah, the Sunset junior relaxed into his final acceleration to the finish. Diaz crossed the line first with a huge new personal best of 15:15.60 with Morken fighting hard just a second back in 15:16. Bennett and Convey both looked composed, holding on for third (15:22) and fourth (15:24). Junior Ryan Rodriguez notched his first sub-15:30 time with a fifth place 15:29.
After the race Diaz didn’t seem to quite believe what he had just done, saying “this is all a dream… this whole season I never thought that I’d be undefeated and it’s just awesome!” With Rodriguez (5th) and Tomas (7th) making a nice 1-2, Belen Jesuit had some cushion; but, they really didn’t need it. Though they were not favored to win, the Wolverines continued their dynasty by winning a record fourth-straight (fifth overall) Race of Champions team title. With 114 points, they not only had the best top three (Alex Issac was 23rd in 16:06) but got their five in first as well with a 16:04 team average. Belen also won the middle school division earlier in the morning, so the future looks bright!
Ft. Walton Beach used solid depth with a 40 second 1-5 split (15:58-16:38) to keep ahead of St. Thomas Aquinas 147-160 with team averages just a second apart (16:18 and 16:19, respectively). 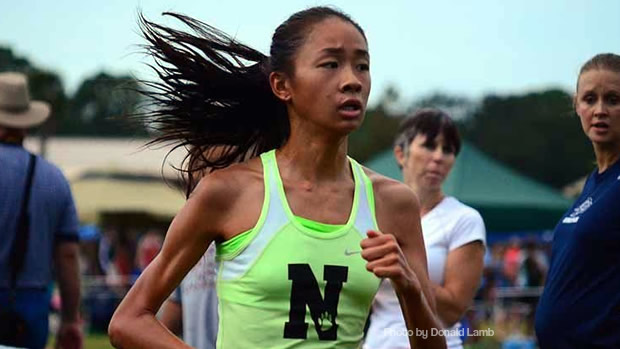 The story of the season so far in girls cross country in the state of Florida has been Karen Xiang of Nease. The senior came out of virtually nowhere to suddenly be on the top of many lists and mentioned as a possible state champion and even potential Foot Locker finalist. It’s rare to see such a quick rise.
However, going into the flrunners.com Invitational there were mixed expectations perhaps. While many felt she was the favorite, others doubted her big race experience. Though she was undefeated so far this season and showed her toughness by defeating Julie Wollrath at Katie Caples, Nease doesn’t often travel very far. She hadn’t yet seen the likes of Emily Edwards, Alexa Cruz, Julia Montgomery, or the Estero girls. What would happen she was really tested?
She would rise to the challenge, that’s what! The pace went out on the slow side over the first 800 meters. The pack remained tight and included the expected list of characters: Xiang, Cruz, Edwards, Araceli Leon, and Caroline Barlow—among a dozen others.
Around three-quarters of a mile in things started to spread out to some extent. Montgomery of Pine Crest pushed on the accelerator before Xiang decided it was her time to crank it up. Edwards was there to answer the call and kept a few strategic steps back, with the 6-runner chase pack about 5-10 meters behind. With the crowd looking on from across the lake, the leaders crossed the mile mark around 5:42 with Xiang continuing to extend. For Edwards it was all according to plan up to that point.
“I wanted to stick with the pack and not go out (too fast) like I had done in the past,” Edwards said, “if someone went out (I wanted to) keep a small distance from them.”
Xiang, who still seems to be learning herself and her abilities, was aiming to take it out a bit conservatively. The senior said she just “wanted to keep up with them them as much as (she) could.” After she began taking control and hammering the pace, she never really looked back.
As the leaders came back into view running down the banks of Alligator Alley, Xiang had opened up about 10 meters on Edwards and another 20-30 meters on the chase pack. Edwards and Xiang crossed the bridge and passed the two-mile park around 11:37.
During the last mile Xiang was feeling really good, just as Edwards was starting to feel the effects of the pace.
“It was really comfortable,” Xiang smiled, “It felt good! I was surprised no one came with me.” 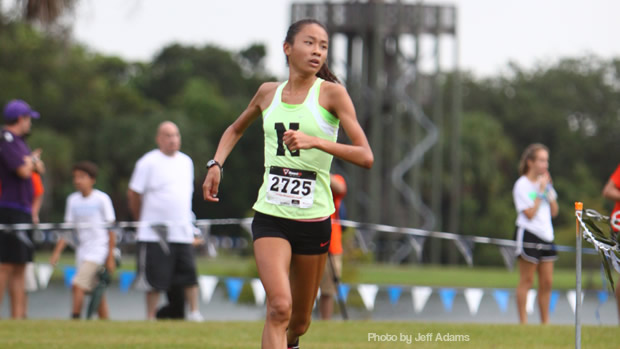 After having hung within steps of Xiang for two miles, Edwards started to slip back to the chase pack as Xiang continued to extend her lead to about 30 meters until the two slipped out of view around Do or Die Bend. After they emerged, it was clearer than ever that Xiang would be the next winner of the storied Race of Champions. Her form and stride looked impeccable, as she cruised in for the 17:54 victory.
Meanwhile, the battle for second place was starting to heat up. Alexa Cruz closed the gap to Edwards and passed coming around the final bend and entering the straightaway. Undeterred, Edwards regained her composure valiantly and showed some of that leg speed that has made her so tough on the track (2:12 800m best).
“I don’t have the fastest sprint,” Cruz admitted, “I just tried to pass her while I could and get as much of a lead as I could and see where that took me.”
Edwards, the defending ROC champion, staved her off to secure the second place finish with an 18:04 that she called her best race of the season. And the St. Thomas Aquinas sophomore was also happy with her new three-second personal best of 18:06. The early leader, Pine Crest sophomore Julia Montgomery, held on for fifth place in 18:24.
Also notable in this race was the emergence of a couple of new stars from Southwest Florida having break through races with Grace Casagrande of Cardinal Mooney taking fourth in 18:14 and Devin Molloy of Barron Collier earning eighth in 18:32.
In fact Southewest Florida in general just cleaned up, with eight of the top 12 spots coming from that part of the state. Caroline Barlow (Gulf Coast) was seventh in 18:28 and Estero represented the other four of those spots.
Led by Araceli Leon’s sixth place 18:25, the front four from Estero were dominant: Bethany Jenkins 18:39 (9th), Katie Slater 18:40 (11th), and Daley Cline 18:44 (12th). Though Coach Sommer had to tap his toe for a while until number five and six came into view, it was more than good enough with Elise Tutton and Megan Slater coming in in 19:48 (58th) and 19:50 (59th)—putting six over before any other team could manage five. Estero’s score of 68 points was 67 better than second place Winter Park’s 135, and it secured the defending 3A state champs their third Race of Champions victory in a row. Their 18:51 team average was one of the best girls team efforts in meet history and third ROC championship in a row for Estero.
Oak Hall took home the final trophy with a third place 170 points and 19:28 team average, with Ferguson (183, 19:34) and St. Thomas Aquinas (195, 19:27) not far behind.