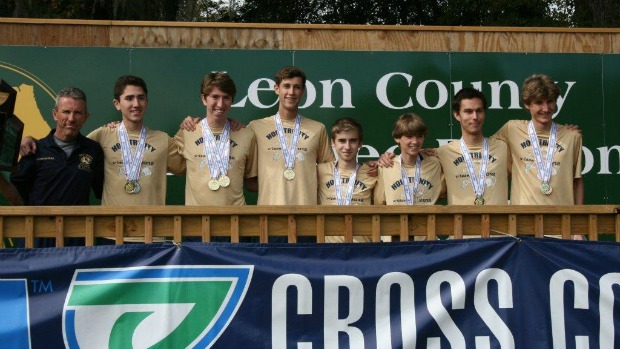 Flrunners is reaching out to interview and recognize all of the head coaches from the victorious cross country state championship teams to give them the opportunity to reflect and share their feelings and thoughts on their team's successful fall seasons culminating with state team titles. Coach Doug Butler has the most overall state titles of any coach and he continued that trend in 2012 when he picked up his 12th overall and sixth boys state championship. 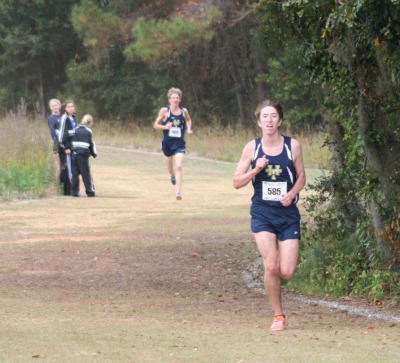 How many years have you now been coaching?
I have been coaching for thirteen years.
What advice did you give your team prior to the race or the week leading into the state meet?
I told them to remember their goals they set this summer before the season started. All the hard work they put in all summer long has brought them to this day. Go out and have fun and run not only for themselves, but for their team, their school, and all the great runners at HT that have come before them and built the program to what it is.
What was the race plan for the state meet and how did you feel it was executed?
The plan was for Alex Brown and Tristan Kattenberg to run up front with  Daniel Salas, and Andrew Cacciatore and Cole Oliver to hang around the top ten and then in the last mile move up. All did as we expected and Trevor moved up as well. We got five in the top eighteen I believe. We wanted to score less than 40 points and we accomplished that.
What were your feelings and emotions when you realized your team had won or during the awards?
Well I knew we had a 45 pt lead at the two mile mark, so I was able to breath easier. I knew that unless the wheels fell completely off, we would be okay.
What were the biggest challenges for this year's team?
The biggest challenges every year are getting kids to not rest on last years results!
What do you think were the keys for your teams to peak and perform their best at season's end?
I don't know. I guess we seem to do an okay job of running well at the end of the season when it counts. Although some say my kids peak too early, we are doing okay. We don't taper a whole lot like a marathon runner. We still double twice a day three times a week up thru the regional meet. We do start taking longer rest between intervals, but don't back down mileage much at all.
What would you consider as the low point of the team's season? How was the team able to respond?
Great American was a low point for us. We did not run well there at all, but they all bounced back fine for the home meet. 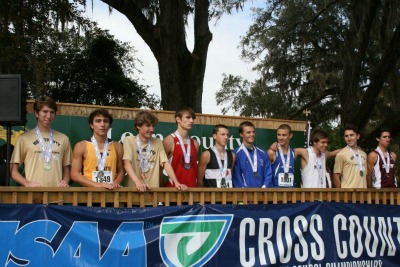 How would you best describe the group of kids that you coach?
Our team is like a large family. They run together in the morning, then shower, and all eat together at school for breakfast. We do team dinners every week and spend a great deal of time outside practice together. I am a firm believer that the stronger the social cohesion, the greater the team success.
What role do your parents have with the program?
Our parents are the best parents in the state hands down! You see them at the meets with the team t-shirts on, they provide the funds to go to big overnight meets, I don't think there is another coach that gets as much parental support as I get. Without them I would not be coaching.
What would be the best way to describe your coaching style?
Autocratic. It is my way or the highway.
Who were the leaders on your team and what was the importance to the squad?
I had four seniors that were team captains, but three of them are too quiet. Tristan was the main vocal one on the team and was a great leader.
Who was the biggest individual surprise or runner that most impressed you with their improvements this year?
None of the varsity guys were really a surprise. Michael Cacciatore who was our tenth man ran 17:48 in his first season running cross as a senior. I thought that was the biggest jump.
What are your expectations for next year's team?
Our boys and girls team goal every year is to win state. Not trying to sound cocky, but thats what we set our goal as every year. If we do it great. If we come up a little short, that's okay too. We know we can sleep at night knowing we went to practice everyday working to win a state title.