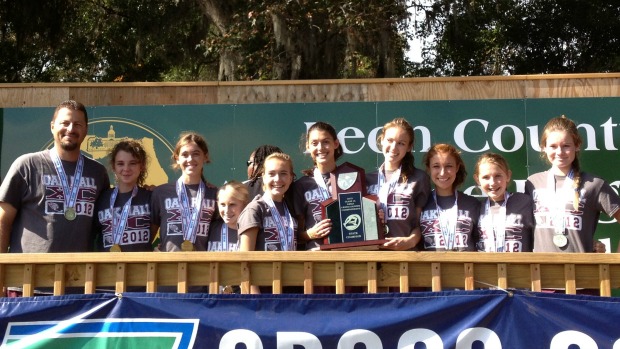 Flrunners is reaching out to interview and recognize all of the head coaches from the victorious cross country state championship teams to give them the opportunity to reflect and share their feelings and thoughts on their team's successful fall seasons culminating with state team titles. After missing out on a state championship in 2011 by just three points to Providence, Coach Edwin Mctureous led the ladies of Oak Hall to their first cross country team title in school history in 2012.

I have coached Oak Hall cross country for fifteen years. 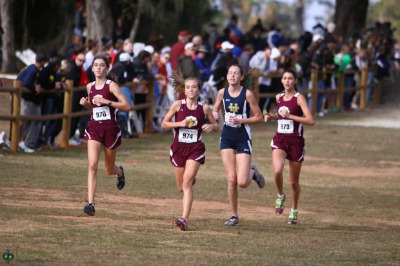 I approached this week as I did every other week this year during cross country.  I told the girls to win the race and FINISH!
What was the race plan for the state meet and how did you feel it was executed?

Our race goal was the same for state as it was for every race we were in this year and that was to win the race. We achieved our ultimate goal by winning state, so I would give the girls an A+ for race plan execution. The individual race plans that I had with each runner forty-five minutes before the race were more specific and I could tell in their eyes they were ready.  Some of the runners were told to stay relaxed early and near the front, others were told to make sure they beat specific girls from other teams, and one was told to just run like a horse.
What were your feelings and emotions when you realized your team had won or during the awards?

I was overwhelmingly filled with pride and excitement. All their hard work had paid off.
What were the biggest challenges for this year's team?
One of this year’s biggest challenges was to stay healthy. To do the little things that keeps their bodies and minds healthy. The other challenge was to have the girls finish the end of the season running (to their full potential), unlike the previous year.
What do you think were the keys for your team to peak and perform their best at season's end?
They were able to perform their best at the end of the season because of what they had done all summer and during the regular season. Taking care of the little things like sleep, eating right, and staying on top of their studies was our main focus the finally three weeks of the season. 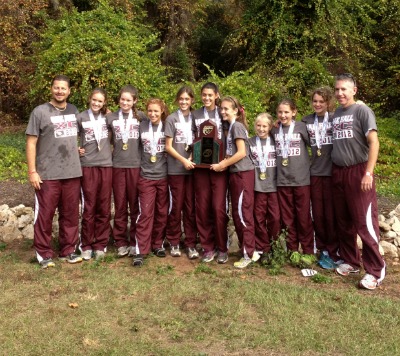 What would you consider as the low point of the team's season? How was the team able to respond?
I don’t feel we really had a low part of the season this year. Besides a few aches and pains that a few pool workouts took care of, we were very fortunate to be able to compete at a high level as a team all year.
How would you best describe the group of kids that you coach?

I would describe this group of kids as driven, determined, spunky and fun!
What role do your assistant coaches play with the program?
HUGE!  I feel you must surround yourself with passionate, loyal and dedicated coaches.  Without their support I would not be answering these questions.
What role do your parents have with the program?
I have great parent support. Without their backing, the program would not be where it is at today.
How would you describe your coaching style?
I would describe my coaching style as relaxed, direct, and very realistic.
Who were the leaders on your team and what was the importance to the squad?
The only two high school runners in my top seven were very important to the team this year. Brittney Olinger and Katie Ringdahl did a great job not only on race days, but during practices to help prepare the younger runners for this incredible season.
Who was the biggest individual surprise or runner that most impressed you with their improvements this year?
Lindsay Rosenberg was a big surprise by the end of the season. As a sixth grader, she continued to improve every race and had an incredible run at the state championship. She dropped two minutes off her Pre-State time and was our number five runner with a time of 20:25 to help seal the championship.
What are your expectations for next year's team?

The expectations are a repeat of this season, to FINISH!