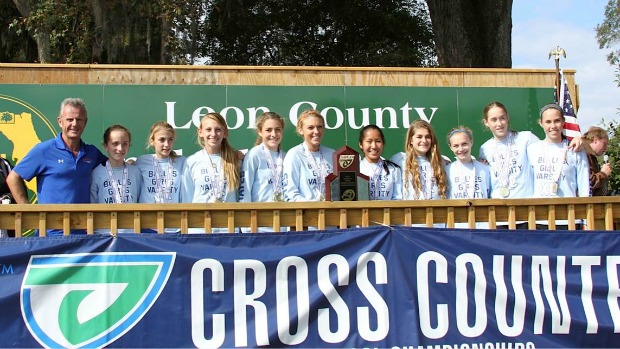 Flrunners is reaching out to interview and recognize all of the head coaches from the victorious cross country state championship teams to give them the opportunity to reflect and share their feelings and thoughts on their team's successful fall seasons culminating with state team titles. Coach Tony Ryan is in his tenth year as head coach of the Bolles girls team. In 2012, he led the Lady Bulldogs to another state title in the programs successful history. 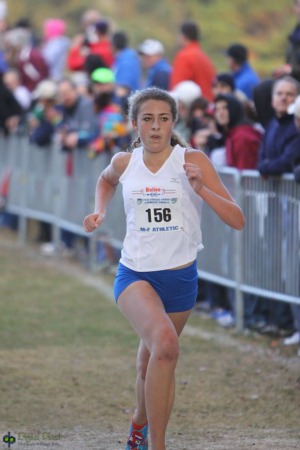 I've been coaching for twenty years. This is my 10th year coaching the girls team at Bolles.

I told them just to stay focused and relaxed going to the starting line; to think about the good races they had throughout the season (especially districts and regionals where they ran very well), and to just do the same again at state (only a bit faster this time).

What was the race plan for the state meet and how did you feel it was executed?

The race plan was to get out well, but not too fast. We wanted to be running people down from the mile to the two mile marker and to pick off a lot of places in the second half of the race.  For Mackenzie,  she was to stay fairly close to the leaders, but not to get caught up in chasing after Daesha for the first 800 meters. I think she was somewhere in the top ten at the 1/2 mile, in 4th spot by the mile marker, and she ended up finishing really strong in a solid 2nd place. The next three Lily, Ally, and Rachel  were all together by the mile maker somewhere in the mid 20s and they really worked hard as a pack to come through the field and finished in 11, 12, and 13 (from 19:14 to 19:20) and that pretty much sealed the deal for us. Then the next three Ashley, Sarah Jane, and Aoife also stayed together through the first half of the race and the goal there was for one of them to finish ahead of everyone else’s number four runner and get in the top 20, which Ashley managed to do. The girls ran the state meet better than any race I have seen them run. Every one of them ran their best race of the year and five ran lifetime PRs. We often talk about running the first half of the race with your head and the second half with your heart, and that’s exactly what they did. They were the second place team at the mile marker (ten points back), but they never paniced, and they really tore it up and picked up about 50 points in over the last two miles.

What were your feelings and emotions when you realized your team had won or during the awards?

Even though we were behind as a team at the mile marker, the girls looked really strong, focused, and determined when I saw them. By the two mile marker I knew that, unless the wheels completely came off in the last mile, we had won. I suppose when you go in with the favorites tag there is always some relief when the team can live up to those expectations. Of course, I was very happy for the girls and the coaches. With the exception of two girls, this was the first state title for the rest of the team and the rest of the coaches.

I don’t recall anything major. We had a few minor injuries throughout the year, but those girls just took a few days off and/or took it easy, maybe spent some time running in the pool instead of running, and they were fine in less than a week (that’s where having a good base of summer miles helped them). I think this might have been one of the rare years when we did not have a varsity runner miss any races all season because of injury or illness. 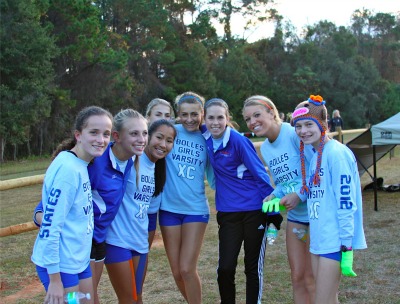 What do you think were the keys for your teams to peak and perform their best at season's end?

I think a lot of it has to do with staying healthy going into the post-season, and having a lot of confidence in yourself and in your teammates. Thishis team was healthy and confident (in a good way) by the time we got to districts. It was just a matter of keeping the momentum going after that;. Also, this year there was a lot of competition for varsity places from the first meet (Katie Caples) all the way to the post-season; I had to tell one girl who ran 20:14 in mid-October that she would not be one of the seven girls lining up at state because we had seven girls who ran faster and we had three more girls who broke 21:00 minutes this year who missed out on racing in the post-season. It’s a great motivator to the seven girls going to the starting line at districts or regionals to know that there are plenty of fast girls willing and able to take their spot in the next race if needed.

What would you consider as the low point of the team's season? How was the team able to respond?

We started off a bit slow at Katie Caples with a few girls just running okay that day. However, it’s par for the course for us to start the season off slow so I was not too worried about that. Our worst team race of the year was probably at the FSU Invitational/Pre-State and I was worried at first that they might have had some difficulty with the course. However, I think that it was more to do with coming off a big race the week before at Great American and training really hard that week (they were just a bit flat that day). We bounced back really well with a great race a week later at the Bale-n-Trail.

I couldn’t ask for a better group of kids to coach. For such a young group they are very dedicated and focused. They rarely miss a practice and work hard when they are there. Also, not only do they want to run fast as individuals they also care a lot about how the rest of the team is doing. This has really influenced the rest of the JV runners to work harder and to improve and that can only help the overall strength of the cross country program. 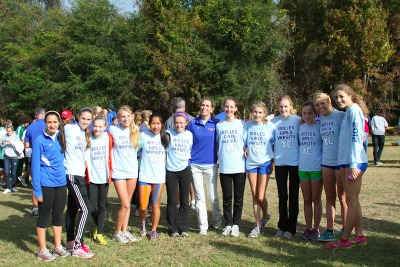 I am fortunate to have a great group of assistant coaches. They will run with the team on their long runs and workouts (something I have no inclination to do) and they also make sure that everyone stays positive throughout the season. I have to give a special mention to Sharon Pentaleri who ran with the girls all summer (while I was in Ireland for six weeks) and who ran with the varsity girls on pretty much every workout and all the long runs they did all season.

What role do your parents have with the program?

We have a great bunch of parents who know how to be supportive as parents. They let the girls do the running, let the coaches do the coaching and they contribute in other ways that can help with the overall success of the program. For instance, we try to have the runners eat healthy snacks (chocolate milk, bananas, etc) after every workout and we have different parents who take care of that twice a week all throughout the season. The parents of our varsity runners especially are very good about ensuring that their child does not have conflicts with practices with doctors appointments, etc.

I’m not sure really. I’m hard to figure out even by myself! I am sure that my background has influenced the type of coach that I am. I was a competitive runner who trained hard so that I could get (and stay on) a track scholarship to the states. I know from experience that if you want to be a good runner you need to put in a lot of work, stay healthy, and enjoy what you do. I try to stress those three points to my team on a regular basis.

We had no stand out vocal leaders similar to the last state championship team in 2009 (like Rebecca Chandler and Amelia Williams were). However, we had girls who led by example in positive ways. First off, Lily Arnold and Sarah Jane Jones were our most experienced runners and they were very good with encouraging all of the younger girls. Ashley DeHechavarria, who was also on last year’s team, is a very positive person and this rubs off on the other girls. Finally, Mackenzie Wilson, despite transferring in as a 9th grader, was a major influence and great role model  because of her work ethic, drive, and determination, no doubt about it. She shook things up when she arrived and everyone stepped it up just by having to try to keep up with her.

Two come to mind very quickly. I was not very surprised that Ally Hajda made varsity this year especially after watching her throughout the track season, however, she made a big jump very quickly this fall, time wise going from running 21:30 in the pre-state meet at LER last year to 19:17 (and 12th place) at the state meet at ARP this year. She went from not being in our top twelve runners last year to being a solid top three for us all year. The other of course is Rachel Shapiro who surprised everyone. We knew from the get-go that she had talent, but never imagined she would improve so quickly. She ran a little with the team over the summer. She started out with a 22:49 at Katie Caples, made the varsity team by mid-October, and then ran 19:14 for 11th place at state. She certainly kept the rest of the girls on their toes as we entered the final stretch of the season.

We try not to put too much pressure on ourselves, but our goal every year is to get on the podium at the state meet which the girls team have managed to accomplish seven times in the last nine years (even if last year was by default).  So, the goal next year will be much the same as all the other years and that is to train well, stay healthy, and race our best in the post-season. If we win again that’s great. If not, and we do our best by doing all the right things to prepare, that’s okay too.